Scores of families and their pets congregated on Oct. 3 to celebrate the anniversary of the Walkway Over the Hudson State Historic Park and the unveiling of the Hudson Valley Rail Trail.

On a day when a spectator would be hard pressed to find a cloud in the sky, local politicians, authorities from the State Office of Parks, Recreation and Historic Preservation, along with inaugural members of the committee responsible for developing the park and rail trail assembled to vocalize the success and economic development spurred by the walkway.

The festivities began when Ray Costantino, supervisor of the town of Lloyd and founder of the Hudson Valley Rail Trail, cut the ribbon to the four mile trail connecting the Walkway Over the Hudson to Tony Williams Park in the Hamlet of Highland. Accompanied by his wife and President of the Hudson Valley Rail Trail Association Claire Costantino, Congressman Maurice Hinchey, Ulster County Executive Michael P. Hein and Assemblyman Frank K. Skartados, Costantino preached the economic importance of the trail to an eager crowd.

“It will become our economic development engine that will drive the town of Lloyd for years to come,” Costantino said, referring to the trail.

According to Hein, Ulster County creates more than $400 million in tourism revenue and says the addition to the rail trail will further local growth. Costantino says the trail will bolster Ulster residents’ quality of life by attracting business, increasing property values and providing recreational activities for all ages.

Standing in front of a train cart, under a canopy of trees with a slight breeze blowing from their right, Costantino and his colleagues spoke of what he said will become a “network of trails” connecting Ulster County. Future development is planned, stretching the trail an additional 2.5 miles westward towards New Paltz, a job expected to be completed in 2012.

“This is the tip of the iceberg for connecting the rails,” Hein said.

Following the ribbon cutting ceremony, the throng of spectators and local political figures flocked to a white tent to show gratitude to the “Build a Bridge” Campaign Bronze Medallion Recipients who contributed $10,000 or more to the transformation of the Poughkeepsie-Highland Railroad bridge into the Walkway Over the Hudson State Historic Park. “We must recognizer the State Parks and Recreation staff for the great job they did day in and day out,” said Elizabeth Waldstein-Hart, executive director of the Walkway.

Waldstein-Hart referred to the Walkway as an opportunity for the state economy to recover while celebrating the recent improvements to the park. She commemorated last month’s ribbon cutting of the stairs on Washington Ave. that provided new neighborhoods access to the bridge.  Waldstein-Hart commended the installment of a lighting system that will allow the park to provide functions at nighttime.

Like those before her, Waldstein-Hart focused on the future development of the Walkway. Waldstein-Hart envisions a farmer’s market every spring and an elevator to provide river front access. The goal of the future, according to Waldstein-Hart, is to garner national attention and continue to generate economic growth for the local and state communities.

“The Walkway is on its way to being one of the most famous and successful bridges,” said Carol Ash, commissioner of the State Office of Parks, Recreation and Historic Preservation.

As the black sheet was pulled off the new Scenic Hudson Gate, cameras flickered like lightning bugs around a camp fire. The towering, silver gate divided the bridge and demonstrated the walkway’s new logo of a leaf. Yards away from the new gate, Waldstein-Hart led the pack to the unveiling of the bronze medallions that overlook the calm waters of the Hudson River. The donors posed for pictures in front of their respective medallion and spectators looked on in amusement.

“Our mission is to keep contributing to society and develop the economic foundation of the Hudson River Valley,” said Sally Mazzarella, chairperson of the Walkway Over the Hudson.

Thu Oct 7 , 2010
Due to the acoustic friendly environment, many musicians such as “Weird Al” Yankovic and Vinnie Martucci  record music in their bathrooms. Up until now, that may have been the best option for SUNY New Paltz music students looking to record. In an effort to provide students with an opportunity to […] 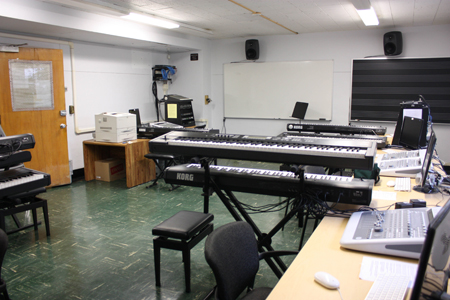