Over 100 people gathered in Lecture Center 102 on March 15 to hear a discussion on the recent  uprisings in Tunisia, Egypt and Libya, and how Americans can be inspired by them to make changes in their own governments.

The panel members voiced concern over the lack of involvement of citizens in activism. Jack Smith, editor of the Hudson Valley Activist Newsletter and a journalist for 25 years, stated the public opposition of the wars in Iraq and Afghanistan are at an all-time high. Despite this, Smith said, “the wars are receding in the conscious of U.S minds as we speak.”

Other panel members included Donna Goodman, a New Paltz activist and community member; Michael Sussman, a civil liberties attorney from Orange County; Barbara Upton, a New Paltz Woman in Black member; Claire Papell, a SUNY student and activist; and Tarak Kauff, a Woodstock activist and member of Veterans for Peace. They all spoke on behalf of invigorating the community to protest the wars just as Tunisia and Egypt utilized social media to spark revolutions in their own countries.

Panel speaker Donna Goodman stated that if the U.S did not spend the amount of money it does on the military and military safe-guarding, the economy and infrastructure problems could be fixed in a few short years time. An example she gave was if half of the military budget was given to fix the crumbling infrastructure, in two years time the $2.2 trillion problem would be solved.

While the U.S does not have the same problems as the Middle East, Brian Sussman believes citizens need to fight for their democracy. Sussman said since the majority of the population is not in favor of the Iraq and Afghanistan wars that the U.S should renege its involvement. The U.S government is a representation of the people’s wants and needs and Sussman said, “When the people stand up there is no power greater.”

Editor’s Note: In “Middle East Lecture Spurs Activism,” written by Laura Cerrone, there were multiple errors. Brian Becker, national coordinator of the ANSWER Coalition (pictured atop the article), was not named or identified in the article. In addition, the piece’s closing quote is attributed to “Brian Sussman,” which, mistakenly, is a combination of Brian Becker and Michael Sussman, who both spoke at the event. We have contacted Cerrone and are in the midst of correctly attributing the article’s final few quotes. The copy desk apologizes for not sufficiently fact-checking this.

Thu Mar 31 , 2011
Tall snow banks surround the roadside stand at Dressel Farms, on Route 208 in New Paltz.  It’s the middle of winter, and the usual fall flock of customers are shopping in the warmth and comfort of a supermarket, where the prices are low and temperatures are high. Their patrons are elsewhere, […] 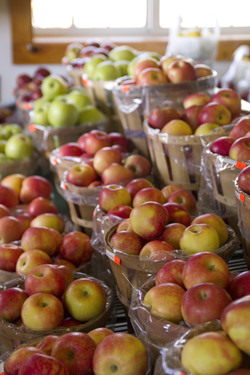