Dexter Pabulayan has an infectious craving for human flesh.
Not literally though.

Pabulayan is one of the bandana-wearing, Nerf blaster-armed students, creeping and running around campus playing Human vs. Zombies (HvZ).

“It’s basically a glorified and addictive game of tag,” said Pabulayan, a third-year student and president of HvZ at New Paltz. “The whole objective is to survive a zombie apocalypse,” he said.

The game starts out with a couple of hand picked zombies, known as original zombies (OZs). OZs devour humans by tagging them. Once a zombie touches a human they become a zombie, continuing to feed on the rest of the human population. The humans attempt to fight off the escalating number of zombies. If a zombie doesn’t tag someone in 48 hours, they starve to death.

The game takes place over the course of a week around the clock. According to Pabulayan, the biggest game to hit SUNY New Paltz included 170 students.

“People would be walking by and have no idea what’s going on. They stop and sit down to watch because it’s really entertaining,” Pabulayan said, “and that’s how people find out, because it looks fun, they want to get in on it.”

Brad Sappington and Chris Weed, roommates at Goucher College, created HvZ in 2005. While consuming a few adult beverages, Sappington and Weed wanted to find a way to have fun with fellow dorm residents. They decided to invent a game based on the popular college game “Assassins.” However, it proved to be a flop because it was uninteresting. Looking to improve the idea, “zombies” became the preeminent choice.

“Zombies weren’t too popular just yet, we came up with this just before the initial upswing of the zombie fad within the media,” Sappington said, “timing is everything and we got lucky.”

HvZ spread virally on the Internet, grabbing the attention of many colleges across the United States, including SUNY New Paltz.

“College is the perfect environment for a game like this. College kids are also adventurous enough to do crazy sounding things and love telling their friends,” said Sappington. “It’s kind of the perfect formula.”

To keep the game as “realistically zombie” as possible, missions that advance storylines are created. This particular storyline revolved around an avian flu mutation that spread through the geese on campus. A scientist working on an antivirus was unable to complete the serum when zombies broke through. This then becomes one of the many rescue missions for humans to complete while avoiding being tagged.

To distinguish who is who, bandanas worn on one’s head signify that they are zombies and those worn on the arm signify that they are human. The game can only take place outdoors on campus and not in the buildings. Dan O’Regan, a third-year student at SUNY New Paltz, is an avid player of HvZ. It’s the thrill of the hunt and chase that appeals to him the most and strategy is one of the most important things in HvZ.

“You always have to think a step ahead, think in terms of where people are going to go and you start to get really paranoid if you are human. When you get a call that somebody is stuck, say, by the library, you go out with your guns, ready to kill,” O’Regan said.

Using a Nerf blaster or socks that act as grenades, zombies can be frozen for 15 minutes, unable to tag humans. Socks are simple while Nerf guns can be reconstructed to be better weapons. Pabulayan’s weapons have been torn open, stripped and modified to shoot the dart further and faster.

“People come up with really interesting weapons, I personally live by Velcro, it does everything,” said Pabulayan. “I don’t even want to think about how much money I spend on this stuff.”

HvZ has also gained the attention of campus police. The use of Nerf guns is banned after 6 p.m. because they can be mistaken for real guns. Pabulayan and his moderators worked out an agreement with campus police to only use socks after 6 p.m.

“It’s in the light of the Virginia Tech incident. I suppose that people walking around with Nerf guns hiding in their pocket could cause an issue,” said Pabulayan. “If somebody didn’t know the game was going on, it could kind of look bad,” he said.

The more time spent together within a group of people, the stronger the bonds become.  A real zombie apocalypse would create intimate relations for those in a group, trying to survive together; HvZ does the same for Pabulayan, O’Regan and other HvZ players.

“The community aspect of the game is my absolute favorite part of HvZ. I met a theater major, science majors and freshman that are really cool. We eat dinner together all the time,” said Pabulayan. “I don’t think I would’ve met them if it wasn’t for this game,” he said.

HvZ players eat, breathe and sleep this game. It consumes their lives. Players are physically active, constantly on the lookout, food is stored in dorms to avoid getting tagged outside, and new friendships are created.

“It’s a cat and mouse game, you hunt and be hunted,” said O’Regan. “It’s a much different way to be in college, and it also makes it really really hard to eat.”

Click here to listen to Soundoff! Humans vs. Zombies.

Thu Dec 2 , 2010
Kevin Dougherty is a second year student at SUNY New Paltz. In addition to that, he is a martial artist, a purple belt at the Orango Karate System. Karate is in all aspects of Kevin’s life; not only does it’s teachings effect fighting, but also his schoolwork, interpersonal relations, and […] 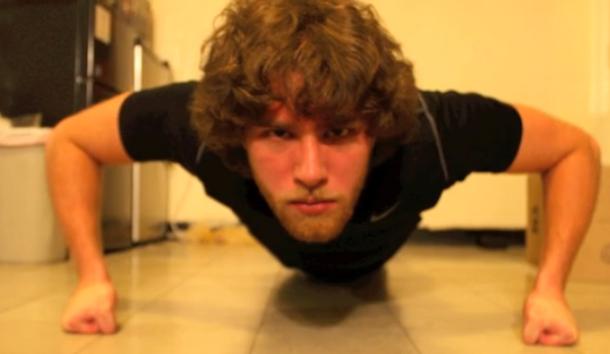