As a horn blew, a long boat manned by six people in karate gi’s raced down the Wallkill River. They were up against a group of Oompa Loompas and a raft filled with super heroes protecting a cardboard city. Moments before, a pirate ship had taken on water and sunk.

This wasn’t a hallucination or strange dream – it was the 10th annual New Paltz Regatta held last Sunday.

At 1 p.m., homemade boats promptly began to parade down Main Street in the Village of New Paltz. Their crews waved, threw candy and blasted water from Super Soakers at onlookers who crowded the sidewalks.

This is all part of the event’s tradition, according to its website. The race was started by the Delta Kappa fraternity in 1955. In 2000, it was revived as the New Paltz Regatta.

The race has always had two basic ground rules: the boats must be homemade and they must be man powered.

Jerry Walker, a retired ShopRite employee, was sponsored by the store and built his boat entirely out of things found in the store.

“The bottom is made from plastic pallets, and the inside is lined with recycled fish boxes,” Walker explained, “Then we encased it in plastic bags. Hopefully she’ll float, we don’t know, we didn’t test it.”

Another boat builder was Mark Pizzarello, technology teacher at New Paltz Middle School. Pizzarello, along with a crew of middle school students, designed their boat for speed.

“We built it mostly out of foam and lauan, and some two-by-threes. It’s pretty light,” he said.

However, it was their pirate ship that began to take on moments after touching the Wallkill. They received the “Failure to Launch” award for sinking before the race began.

While Pizzarello and his crew had to abandon ship early, another group of middle school students took second place in the Six People or More class with their pontoon boat “Kung Pow.”

There were also boats made by single competitors. Joshua Simons, a research associate at the State University of New York at New Paltz, originally built his one-man boat to fish on Lake Taconic. “It’s normally fitted with a sail; the paddles are secondary,” he said.

Even without his sail, Simons managed to place somewhere in the middle of the pack.

Not every boat was powered with handheld paddles. Glenn Eckert helped his son and his Boy Scout’s troop build a paddle boat. Eckert showed how they had rigged two bicycles to paddle wheels to propel the boat.

“The paddles might look small, but it moves faster than you think… as long as it doesn’t break,” he said.

Eckert’s son, Forest, explained that this past year they were plagued with problems.

“Last year, the bike chains kept popping off and the paddles were kind of flimsy,” Forest said. “Now, we’ve shortened the chains and attached stronger wood to the paddle wheels, it should work.”

The regatta lasted about 15 minutes, and neither Oompa Loompas nor a raft of superheroes could stop the boat load of karate students from the New Paltz Karate Academy. They took first place in the “Six People or More” class.

The Oompa Loompas took the award for Most Whimsical Boat or, in their case, boats. The superhero team landed the Most Creative Award for its giant cardboard box city that took up most of the raft.

Perhaps the day was best described by Mike Lauchaire, a New Paltz resident who helped aboard Forest Eckert’s boat.

“The chains to their paddle wheels continued to slip, but besides that,” Lauchaire said.“It was all good.”

The Cycle That Never Ends

Fri Apr 30 , 2010
It’s finals week at the State University of New York (SUNY) at New Paltz and many students are staying up late to get papers done and study for exams. The vicious cycle of staying up late to finish projects and cram for tests only to wake up early for class is never-ending. […] 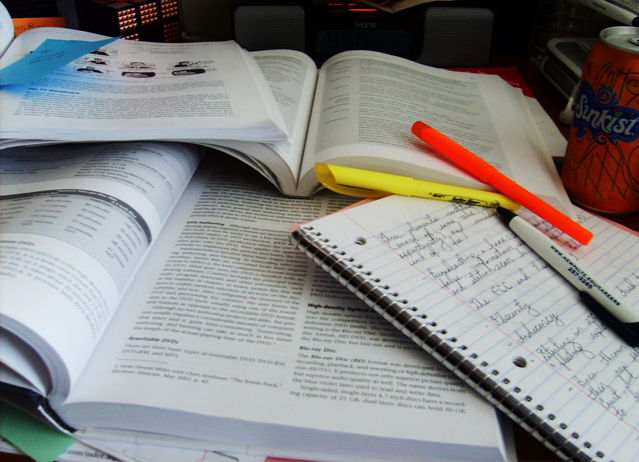