It isn’t rare for New Paltz nightlife to echo with live music. Walking through the streets at night means you’ll most likely hear the faint humming strains of some guitars, or the driving pulse of a drum set. Most bars have nights dedicated to in-house performances. It is rare, however, for these performances to include violas, tubas and songs about sandwiches.

On Tuesday, May 3, SUNY New Paltz’ own radio station, The Edge, WFNP 88.7, sponsored their first miniature festival at Bacchus Restaurant and Bar, bringing in musical acts from the Hudson Valley and New York City.

The idea came from Live & Local, a show hosted by Nikki Gertner, 21, a fourth-year graphic design BFA. Gertner would bring local music acts to the WFNP station and have them perform live on the air.

“The station wanted to do something relaxed and fun in town,” said Gertner. “We were tossing around ideas on what to do, and Live & Local came up.”

The show itself featured four bands from the New York area: Monroe, Sandwich Friday, Not Waving But Drowning and Juice Boys. They all played half-hour long sets to a packed audience.

The night started with Monroe, an alt/indie band from New York that originally hailed from the United Kingdom. Their set featured soulful originals, and simple, stripped-down covers of “Love is a Battlefield” by Pat Benetar, Gnarls Barkley’s “Crazy” and “Umbrella” by Rihanna.

“It was cool playing here,” said Jo Du Pré, lead singer of Monroe. “It was so nice and lovely. The crowd was great. Everyone is so friendly.”

Du Pré, along with guitarist Foy Jackson, played Live & Local back in November. “We did a lot of radio stations, and they were all so stuffy. We came back here because we had a good time.”

After Monroe, the crowd was treated to the tasty tunes of Sandwich Friday, a SUNY New Paltz duo of Matt Hunter and Mike Blandino, making music à la The Lonely Island. The crowd was dancing and laughing at the same time, to songs like “Goodbye Penis” and “No Pants Island.”

“The radio station should do more things like this,” said Amy Diener, 20, a second-year education major. “I came out here to enjoy some good music.”

Not Waving But Drowning, a Brooklyn-based folk/cabaret/vaudeville act, employed unusual instruments like violas and banjos. They had the crowd catcalling to “Lets Go Dancing” and “Maypole.”  They even shattered a glass. For their finale, they brought their instruments into the center of the bar, and had the crowd form around them.

“Not Waving But Drowning were my favorite,” said Jackie Stanitis, 19, an undeclared second-year student.  “I play viola in a folk band, so I appreciated the incorporation of alternative instruments. I had a great time.”

The show ended with Juice Boys, who utilized the most unexpected instrument of the night: a tuba. The baroque-y folk music had the walls echoing, as the crowd stomped along. “I had a great time,” said Devon Williamson, 20, a second-year elementary education major. “It’s fun to do something different. I love the live music, and I would definitely do it again.”

The Edge e-board hopes to make this an annual affair.

“This is something us seniors wanted to do for the station,” said Gertner. “We wanted to see this happen.”
Pieces of Me by Monroe by littlerebellion

Thu May 5 , 2011
On April 28, The Who’s Tommy, under the direction of Jack Wade, kicked off its’ 10-day run at the McKenna Theatre. The Department of Theatre Arts, with support of Campus Auxiliary Services, was pleased to present the play through special arrangements with Music Theatre International. The story takes place during the 1940s […] 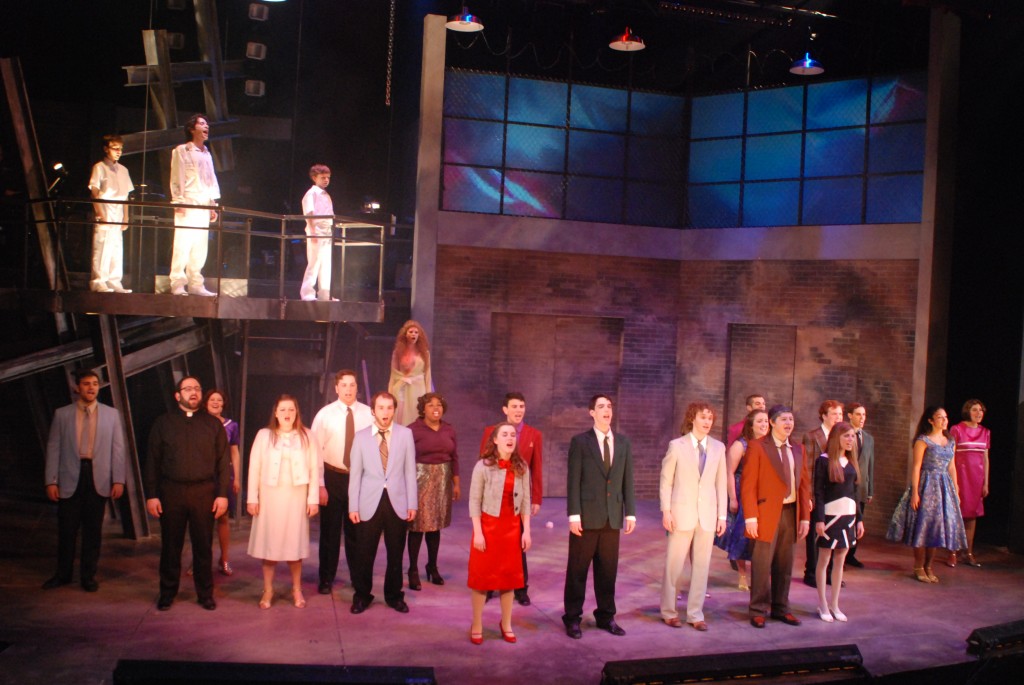