FunnyorDie.com is a Web site that features unique and hilarious videos that viewers can vote on. Viewers have the power to decide the fate of videos by voting whether it is “funny” or if it should, yes, you guessed it, “die.” This site features a combination of original and exclusive “Funny or Die” videos with user-generated content. Funny or Die, created by Gary Sanchez Productions, was created by the brilliant, comedic and sometimes disturbing minds of Will Ferrell, Chris Henchy and Adam McKay. The idea behind the birth of the site is quite simple, actually. The creators wanted to produce a comedy site with hopes “to eliminate all the junk that people have to pick through to find videos.” What easier way to accomplish their mission than by letting fans vote on the actual videos? The site is extremely easy to navigate, which is satisfying for someone looking for a quick laugh. Although the site contains some advertisements, the viewer is not bombarded with incessant ads trying to sell useless items. Another exciting aspect is that Funny or Die features countless videos by celebrities and comedians, who we all know and love.

One example of a recently posted exclusive video by the Funny or Die team stars Jordan Peele as President Obama addressing our nation’s children. This supremely funny video entitled “Skip School to Stay in School” has the production quality of a televised presidential address in which Peele not only sounds remarkably like Obama, but has his mannerisms as well. Not only does “President Obama” encourage children to skip school to watch his address, but he also tells them that their parents can be “stupid dumb-dumbs.”

If you seem to harbor an odd appreciation for the eccentric British rocker Aldous Snow, a character from “Forgetting Sarah Marshall,” then you will enjoy this short video: “The Letter ‘U’ with Aldous Snow,” which is a spoof of a children’s program similar to “Sesame Street” where Snow is the host teaching two small girls about the letter “U.” Distracted and completely uncooperative, the two girls, as well as the noncompliant letter “U” puppet that “isn’t committing” to the scene, drive the easily annoyed Snow to a point of frustration and cursing that he cannot return from.

Finally, no web video portal would be complete without a cute puppy video. The video entitled “French Bulldog Can’t Roll Over” falls just under a minute in length, but one just can’t help finding humor in this short video. In what is clearly a home video, the small white French bulldog seems to be stuck on his back and unsuccessfully rolls from side to side. It is mindless entertainment such as this that is brought to viewers by the crew at Funny or Die.

Fri Oct 9 , 2009
StumbleUpon.com was created by Garrett Camp, Geoff Smith, Justin LaFrance and Eric Boyd. It is a for profit site in which users submit links to pictures, blogs, videos, articles or sites they find interesting. Users access these sites by clicking the “stumble” button on the top of their screens. StumbleUpon […] 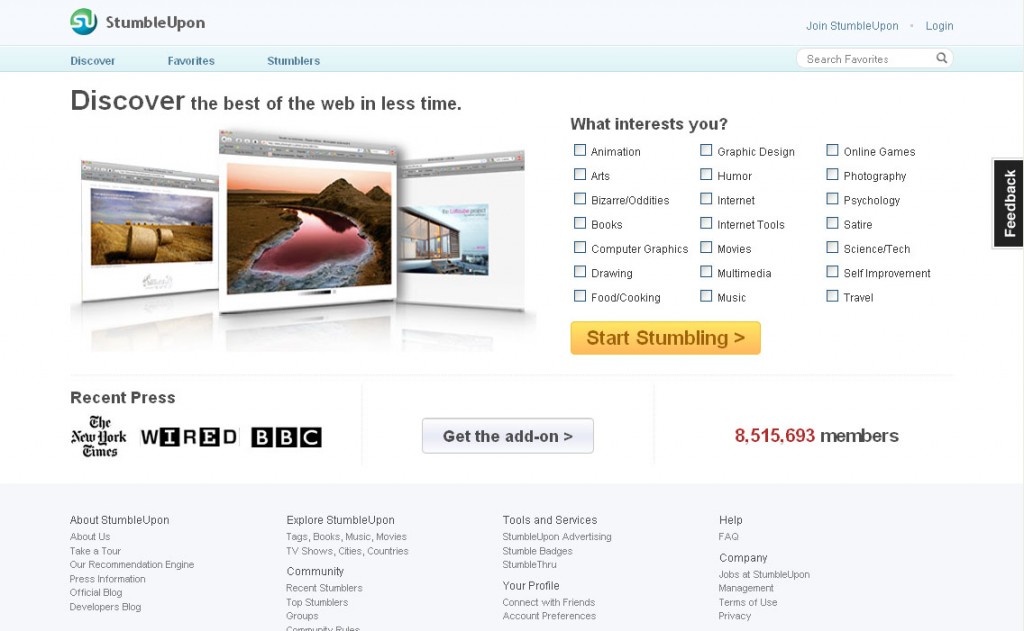