Whenever I take my long curly hair out from underneath my backwards hat at the dinner table, by request of my grandfather, he always imparts a piece of advice:

“One day you’re going to have to stop living in LaLa Land and face real life.”

Thanksgiving and Christmas are always so pleasant.

But recently I began considering this notion of keeping your head in Utopia while living in Inferno.

I, like most semi-educated, mildly enthusiastic, and over-opinionated college students, have faith in my moral compass.  Since we all live in a real world though, let’s get real.

Morals?  I party until the bars close and swear like a sailor.

I’m in college, it’s accepted, and because I’m making strides to one day “better” society, society in turn doesn’t ostracize its average college student for his flaws.

Why can’t society apply this same logic to legislation?  Just as “Truth” is unreachable, doing what is “right” in real world situations is not always plausible.

I get this same feel of arguing semantics between what is right and what is realistic when I hear the rants against Gov. Andrew Cuomo’s NYSUNY 2020 legislation.

In my LaLa Land, the idea of a 28-47 percent hike in tuition over 5 years sounds absurd and outrageous.  In a time of high unemployment and stagnant pay, a tuition hike that outpaces inflation (currently at 2.2 percent annually) is simply unacceptable.

In my grandfather’s real world, the plan makes perfect sense, and while obviously not perfect, addresses key issues that have hampered the growth of SUNY over the past two decades.

The first issue is the feigned fury over the annual 5 percent increase in tuition.  Over the past 20 years, SUNY tuition has increased annually at a 6.7 percent rate with illogical and sporadic spikes, sometimes as high as 40 percent .

NYSUNY 2020 will establish a more reliable system of aid for the students whom this nominal (in terms of nationwide college education costs) increase might affect.  At least one third of the new tuition dollars are to be allotted for financial aid purposes.

The second key issue raised in regards to NYSUNY 2020 is state use of tuition dollars.

For years, money from the random hikes would often never see a SUNY campus, but go instead to Albany deficits. Student costs were going up, while state aid for the schools were going down.  In response, this proposal has a “maintenance of effort” assurance that SUNY’s state allotted funds will not be cut.

Last semester, a massive walkout was held at most SUNY campuses, protesting the cutting of state aid, and consequently cutting student programs and essential courses.  A cap on budget cuts means the student body was heard, and concessions were made to comfort our concerns.

Lastly, the most profound ethical complaint with the program is simple: is making education a competition right? The NYSUNY 2020 will institute an incentive program, based on each school’s academic success that year.

Isn’t America’s entire education system of standardized tests one big competition?  Against myself, my classmates, every student in America or just those at SUNY schools, everyone strives to be the best.

Just as in other avenues of college and post-graduate life, the program will spur healthy competition.

While maintaining an aid floor at each university’s current level, $140 million of investment capital will be divided amongst the most deserving schools over the five year plan. If this plan continues on its “rational” path, the disparity between the aid amounts will not create a catastrophic disadvantage for any school, rather an unexpected and positive boost for schools who perform well.  If schools abide by the guidelines of the budget plan, which call for them to assess how the funds are being used annually, then the extra funds in performance based aid will be surplus, not money already allotted and counted on.

I gave in and cut my hair recently.  It’s sick, but Pa said it so many times that at the mirror moment, standing there looking shockingly clean cut, I could feel the loss of my youthful, innocent hope to do what is right.

I now have no problem settling for life’s best, most realistic option.

Pa used to tell me, “Not even God’s perfect; he made you didn’t he.”

I’d like to see God make a decision affecting this much money and come away unscathed by those still living in LaLa Land.

As the SUNY budget is becoming an increasingly important issue to students here in New Paltz, one option being considered by the community is that of privatizing the college. The renovation of the school’s appearance has led to a debate about the benefits and potential problems with privatization of public universities.  Bianca Caracciolo reports.

Thu Nov 17 , 2011
Ustream live coverage by Roberto X. Cruz   Recently, multiple racial epithets have been found on the SUNY New Paltz Campus. [For the news brief, click here.] Jonathan Espinosa, a third-year Black studies and sociology major, was walking through the Lecture Center with his friend when his friend noticed a […] 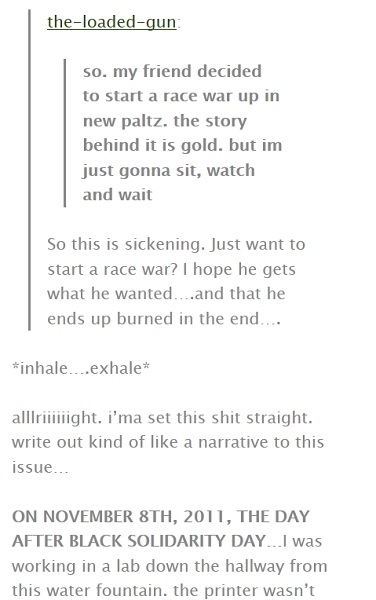