Imagine waking up every day consumed with the one thought, one goal, one destination. Such an obsession consumed sculptor Harvey Fite, as he spent 37 years working on his life’s work, Opus 40.

Fite’s piece, which spreads out over six acres of land, is compiled of finely fitted stones, curved ramps, fountains out of rock, and terraces that are surrounded by pools and trees.

In some sections, Opus 40 reaches down to the quarry floor, 15 feet below ground level, and in others it rises over 40 feet above the ground.

Architectural Digest describes Fite’s work as “one of the largest and most beguiling works of art on the entire continent.”

Fite, a sculptor and college professor, spent more than eight hours a day laboring on his sculpture. It is made entirely of mortar-less bluestone from the abandoned quarry on which it stands. His children would recount years later that the project engulfed Fite’s thoughts and aspirations in his life.

“He was going to devote his life to sculpture,” said Tad Richards, Fite’s step-son. “He figured if he had stone and wood, what else would he need? So he bought this big pile of rocks in the middle of a forest.”

Fite built the house his family would soon live in, and at the same time began to fulfill his dream of individually building a vast work of art.

“When I first saw it in the ‘40s, there were piles of rubble stone everywhere. He basically just took those things and incorporated them into the terracing. It went through stages,” said Peter Jones, a childhood friend of Fite’s sons.

Fite’s life was surrounded by art. In the 1940’s, Fite spent most of his time at home in two different worlds, according to Richards. He was part of Woodstock’s artist colony and part of the local community of High Woods in their hometown of Saugerties. Jones said that Fite’s work soon became the most profound piece of work created between all of his friends and colleagues.

“We didn’t realize as kids how big of a deal it was because everyone was doing something,” said Jones.

While working on his masterpiece, Fite decided to name it Opus 40. He planned on dedicating 40 years of his life to complete this giant work of art.

Harvey Fite came out of a poor, rural Texas upbringing. He was stricken by the artistic bug and found an appreciation for the finer things in life. Not objects of wealth, but of culture, according to Richards.

Fite came east to study at St.Stephen’s Divinity School, which is now Bard College. He left soon after to become a professional actor. While he acted, a love for another art boiled inside of him, the art of sculpture.

Everything else in Fite’s life stemmed naturally from there. He soon met his wife, Barbara Fairbanks, who was the daughter of a painter, Frank P. Fairbanks. The couple lived on the property of Opus 40, and joined their worlds and artistic minds together.

As Fite continued to work on Opus 40, life around him moved on while his two step-sons grew up, and the local art world of Woodstock and Saugerties was flourishing. All through this, Fite stayed dedicated to his piece.

Fite’s personality was extremely self-sufficient. He was dedicated to his work on Opus 40, but he also allowed himself to have a life outside of that, according to his two sons.

“He could do everything himself. Every form of building and home repair — and of course he worked on Opus 40 by himself,” said Richards. “But he was never grumpy or surly. He was always polite, and when he was in company, very social. He could play the guitar, and he was a great storyteller.”

Although Fite was consumed with constant thoughts of his art, he was also still available to his family.

“He was always very accessible. But during his work time, he wasn’t, you didn’t interrupt him then,” said Richards.

As the different sculptures began to take shape, life on the property of Opus 40 continued as a normal family life would.

Fite’s step-sons Tad and Jon have childhood memories of the stone rubble everywhere, and deconstructed walls which were riddled into their young fantastical minds.

“My brother Tad and I loved to play in the jumbled piles of bluestone, which we thought of as caves. We were very disapproving of Harvey destroying our caves to build the walls of what became Opus 40,” said Jon Richards.

Later in his life, Fite began to teach about sculpture at Bard College. When his days were over at the university, he would continue his work on his own sculpture at his home.

Another important piece of Fite’s work was his monolith that he added in the 1960’s. Fite decided not to carve the monolith, and he removed the other figurative sculptures he had created.

After 37 years that Fite worked on his piece, he tragically fell to his death when he drove his lawn mower into one of the ditches in the quarry.

Fite never completed 40 years of work on his masterpiece like he had planned. However, many artists believe that their work is never done.

“It was an ongoing thing; I think he basically finished it. He took it to where it was viewed as complete. If he lived longer, I think he would have only made subtle changes to things,” said Jones.

To this day, Opus 40 sits untouched on the property in Saugerties, NY. Tad Richards currently lives on the property and upkeeps it with his wife Patricia. Opus 40 is maintained by a not-for-profit corporation responsible for its maintenance and presenting arts programs.

Opus 40 continues to amaze new generations who discover it.

“When a work is in progress, you don’t see how it is until after the fact, and when a person is gone, you see something that wasn’t there before and you couldn’t imagine how anyone else could have done it,” said Jones.

Fri Sep 25 , 2009
Many upper division language courses at SUNY New Paltz have been cancelled due to this year’s budget cuts. Most language classes are now only offered in two different levels and some have been canceled entirely. This year the budget cuts have led to the cancellation of Arabic, Latin and Russian. […] 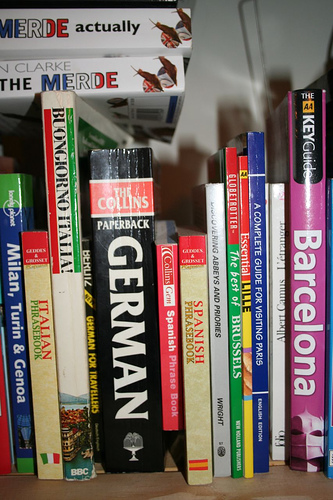