Andrew Lipkowitz is a Dec. 2008 graduate of SUNY New Paltz’s journalism program. Since graduating, he has applied to over 100 jobs, from journalism to public relations, marketing, advertising and even secretarial positions. Only recently did he find a part-time job at an insurance company.

In New York State, the unemployment rate is 7.1 percent while the national unemployment is at 8.5 percent. For recent and future graduates, facing the job market for the first time during the economic recession may be intimidating, requiring them to reevaluate goals and take different jobs.

Lipkowitz is one of many graduates who strung together a list of credentials during college that he hoped would put him above others. He had an internship at the Legislative Gazette, Albany’s student-run government newspaper. He was also a news editor at the college’s newspaper, The New Paltz Oracle. Now, working at Brokers Facilities Corporation part-time, he is still trying to look for a better job.

“This isn’t what I would have liked to be doing, but I’m trying to keep an open mind, since it’s better than bagging groceries,” he said. “Right now, I’m happy to be making money and working close to home, so I can save most of what I make.”

Two weeks ago, Lipkowitz was feeling grim about the job market and the world of journalism. His morale was low and he felt as though no employer would want to hire him. Now, he’s happy just to have a job, but remains unsure about journalism.

Journalism is a field that is struggling and grasping for a business model that will create revenue and allow newspapers to continue.

“I’m not very optimistic about getting a job in that field,” Lipkowitz said. “It would be nice, but I feel like the industry is just shrinking and getting a decent entry level job as a journalist is nearly impossible.”

According to The State of News Media, since 2001 nearly one in five journalism positions are gone.

At SUNY New Paltz, the Career Resource Center helps students utilize their resources, from networking to job searching. They help students fill out applications, create résumés and find internships. They relocated their office and have had a 50 percent increase in student traffic. They have also added drop-in advisory hours, prep workshops and hold many job fairs on campus to help students.

Christine Daly, career counselor for the school of business, reminds students that it is a job to find a job. She advises students to stay positive during this time and broaden their scope when searching for a job. “Tell everyone you know you’re looking for a job, look in other places, be persistent and follow up on leads.”

Josh Gran is a graduate of SUNY New Paltz and was an adjunct English professor while attending graduate school. He got his current job, which he started in September 2008, as a teacher at Monroe-Woodbury High School through a job fair on the New Paltz campus.  Gran would have preferred to continue teaching at the college level, but chose to teach high school for financial reasons.

“The aid you can get through college resource centers are great, but when you’re graduating it might not be so good to think that you’re so in demand,” Gran said. “Sometimes you have to take what you get.”

While Gran is pessimistic about the current career outlook, he sees some hope for college graduates. “You’re in college. You’ve got a leg up on most people. You are on the top of the résumé pile, but it’s a big pile,” he said.

Lipkowitz ultimately plans to follow another career path. “I have decided for sure I want to pursue a post-graduate degree, and I’m still trying to decide what that will be,” he said. He added that he’s leaning towards either a law degree, his MBA or MPA.

The New York Times recently published an article titled, “The Recession May Be a Good Time to Go Back to School,” a guide to the pros and cons to consider when contemplating graduate school. These include the costs, whether it will further your career, and suggestions on what to study.

Dana Sagona graduated a semester early from New Paltz, taking time to apply for jobs, take the GREs and try to find a graduate school. She also studied in the journalism department, but after an internship in the field, decided not to pursue it further. She is taking a relaxed approach towards her future, particularly about going to graduate school.

She only applied to one graduate school: the Library and Information Science program at the University of Washington in Seattle and is waiting to hear back. It is the only place she could really see herself spending a considerable amount of money on graduate school.

“I want to go to grad school but it’s really expensive and not something to hastily pursue just because you’re worried about finding a job without a grad degree,” she said. “Grad school is serious, you’re focusing on one program and if you don’t like it, transferring may not be as easy as it was in undergrad, so you don’t want to make the wrong choice.”

Lipkowitz echoed these thoughts. “Since it’s such a huge investment of time and money, I want to know for sure what I want to do after graduation before I make a decision about school,” he said. “I’ve been strongly considering law school, but I want to work as a legal assistant at a law firm before I commit to that option.”

Despite the situation many graduates may face, there are plenty of alternatives including further education and different job plans.

Sagona and Lipkowitz have different advice to give to those about to graduate.

Lipkowitz advises students to start out where they can. “Treat finding a job like it is your job, and don’t be picky about what kind of job you do or where you work, at least not at first,” he said.

Sagona however, urges students not to take a path they’re not interested in and encourages people to take time to explore.

“The economy shouldn’t deter anyone from doing what they want to do, and it shouldn’t pressure you into doing something you don’t want to do,” she said. “Things will pick up and there is a job out there for you, somewhere.”

Thu Apr 16 , 2009
The limited availability of housing on the New Paltz campus has left students with two options: live on campus for four years or move off campus. Transfer students do not even currently have the option of living on campus because there is simply no room for them. Plans for new […] 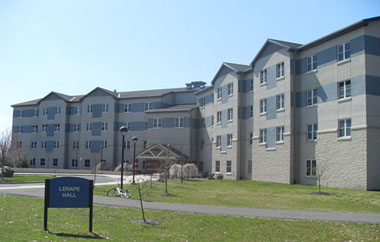