Lehren began his journalism career as a sports reporter for his local daily newspaper. Now he works as an investigative reporter for the New York Times. He was the lead reporter in the famous release of the Wikileaks files including Afghanistan and Iraq war logs as well as diplomatic cables and Guantanamo detainee dossiers.

He described it as “an incredible experience.”

The level of secrecy was something he had never encountered before. The New York Times released small bits of information to make sure that other publications picked up on the fact that they were on the case. Everything was confidential. He wasn’t allowed to talk about his work to anyone. Lehren and his team were even told to separate when walking to the editor’s office in his own newspaper’s newsroom.

The first set of documents that came out were the Afghanistan war logs. They contained names of informants, response times minute by minute, descriptions of battles and exact times of how long it took backup to arrive. Some of this information was not to be made public.

Lehren said he and his team worked diligently to make a one day package of stories of how many people died in the war for the New York Times.

The most significant stories associated with Wikileaks for him were Chinese cyber warfare and roles of ISI drones in Afghanistan. ISI stands for Inter-Services Intelligence, Pakistan’s premier intelligence agency. ISI had been flying small reconnaissance planes commonly known as drones in Afghanistan as well as Iran to aid the Taliban.

One question that was asked during the interview was if Lehren had faced any great ethical dilemmas when working with the diplomatic cables and Wikileaks files. Lehren explained that they had to verify everything not to violate any libel laws and face jail time. A bigger ethical dilemma for him was his work with NBC in hidden camera work. He thinks of it as a tool that should only be used as a last resort. One suggestion Lehren had for up-and-coming international investigative journalists is to study a foreign language. His knowledge of both Spanish and German was a useful tool that helped him in the highly competitive profession. He stressed that it is a dangerous business, especially in certain countries.

Another tip he had for journalists new on the scene is to look for stories that hide in plain sight. One story he discovered was on the recycling of lead car batteries. In the United States, recycling of lead batteries is taken very seriously and held at a high standard. Most of the used batteries, though, are sent to Mexico, where conditions are poor and contamination is more than likely. Some of the lead is recycled and put right back into batteries that are sold back to the United States. He found this story idea after speaking to a colleague of his in Mexico City and reading Mexican documents.

Lehren stressed for students to take advantage of the Freedom of Information Act that allows the public full or partial access to government documents that are previously unreleased. Surprisingly, only one percent of all FOIAs are filed by journalists. He encourages the next generation to use this useful tool.

In the case of the Judge Rotenburg Center, investigative journalism shed light on a surprising discovery. It was a college in Massachusetts where special education students were sent. Nobody had examined that students from New York state made up half of their population. Other states had barred students from going there but nobody knew why. It turns out that electroshock therapy was performed routinely as punishment to many who attended the college.

Journalism has some high stakes. Running on four or five hours of sleep, being under extreme pressure to meet deadlines and drilling down to focus completely on relevant information are some of the things that Lehren knows very well.

For Lehren, the biggest challenge of writing a story is forgetting what brought him there. It is so easy to get caught up in the tantalizing elements in research, he said. Above all else it comes down to breaking things down and not assuming too much knowledge, the reporter told the crowd.

Lehren earned his appointment to the 2012 James H. Ottaway Sr. Professor of Journalism for his groundbreaking coverage of the Wikileaks release. For the spring 2012 semester, Lehren is teaching a seminar on enterprise and investigative reporting. The talk, coordinated by SUNY New Paltz associate professor Lisa Phillips, was attended by a packed crowd including Jim and Mary Ottaway.

The Ottaway Professorship is named for the founder of Ottaway Newspapers Inc., now the Dow Jones Local Media Group whose flagship newspaper is the Times Herald-Record in Middletown.

“SUNY New Paltz is extremely fortunate that this spring our students will have an opportunity to learn from someone of Mr. Lehren’s experience and quality,” said President Christian.

Thu Feb 23 , 2012
How do you decide if your date will be a short fling or something more serious? Would you marry the life of the party? Do pheromones have a hidden role in attracting a potential partner? These are some of the questions about human mate selection and strategies that psychology graduate students Ari […] 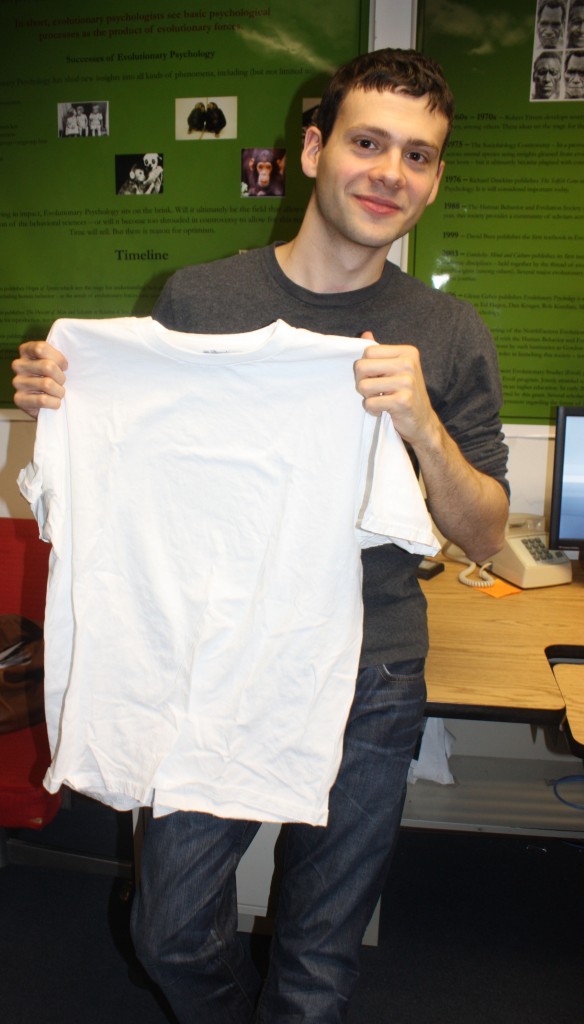