Jared Peer, a senior at SUNY New Paltz, leads a group of prospective students through the sculpture hall, telling them animated stories about his own experiences in the fine arts building As the tour comes to an end, he eagerly asks if anyone has questions.

“What is your major?” a parent asks.

“I am an art education and sculpture major with a minor in art history,” Peer said.

“That’s a lot,” the parents said. “How long will it take you to graduate?”

“Four and a half years.” Peer came to SUNY New Paltz as an art education major. He has a background in woodworking from his father and grandfather. Peer discovered the fine arts program after taking a perspective drawing class in his first semester. He then enrolled in a sculpture class and loved it so much he declared sculpture as a second major.

Having two majors feels essential to him – but not to the New York State Tuition Assistance Program (TAP). The program only gives assistance to students taking at least 12 credits that fulfill their primary major requirements or other college requirements, such a General Education credits.

Peer had been getting grants through TAP every year. But the first semester of his senior year, he focused on his second major and minor. His schedule no longer met TAP requirements and he lost the aid he’d come to depend on.

Special accounts coordinator TAP certifying official, Geralyn Torrone said that for some students TAP can offer up to $3,250. If students are not taking 12 credits in the key requirements, they become ineligible. “The state is very black and white about it,” she said. “You either get the award or you don’t.”

Students who declare more than one major and a minor run the risk of losing TAP. “There is software in the works that may prevent this issue by sending out red flags while students register for classes,” Torrone said.

Since he is not eligible for TAP this semester, Peer has had to take out a subsidized student loan to continue his education. Unlike grants and tuition assistance, student loans have to be paid off after graduation.

Peer used to receive an average of $10,000 in grants, including TAP. This year he is only receiving $5,185 in grant money and had to take out a $5,000 subsidized federal loan. Since it is a subsidized loan, the government will pay the interest while Peer is in school.

“I’ll admit, I did cry over it,” Peer said. “I worked a lot to make sure loans wouldn’t be a problem, but I had no choice for this semester.”

Peer is enrolled in 10 credits in his primary major, art education, and an additional three credits between his secondary major and minor.

He has avoided asking his family for help. “I see college as my own undertaking. I don’t have to go to college or get this degree, but I want to. So, in my eyes I should be taking full responsibility for tuition and rent.”

With the grant money, a subsidized student loan and what he averages over the intercessions, Peer is still below the living wage. According to the living wage calculator for Ulster County, Peer needs to make $11.21 an hour in order to maintain a normal standard of living, but he only makes $120  working 8.5 hours per week with his on-campus job.

Fortunately, his housing situation has gotten better since last year. This semester he and his roommates found a four bedroom apartment that is $600 per person, including utilities. Last year the apartment he lived in was $625 a month, and it did not include electricity or the $50 a month Wi-Fi.

“I’d be on the phone with my dad theory crafting how much we think next month’s electricity would be based off of the previous four months,” Peer said. “It was hard to build in that cushion.”

Peer is still frugal with his other expenses including groceries. On average he spends between $60 and $80 every other week on groceries. Peer usually hitches a ride with his roommates to the local food store Tops to get groceries since he has no source of transportation.

Peer said the only way he can get things done is if he write them down.

In order to stay organized Peer has three different to-do -lists that are color coated. “I often say that my perfect room would be one that has walls that are whiteboard, chalkboard and corkboard with a bed somewhere in the middle,” he jokes.

During his hours as a hall monitor, Peer has to help other students use the equipment. If no other students show up he uses that time to work on his own projects and assignments.

The smell of paint fills Peer’s work area in the sculpture building. His workshop area, usually neat and clean with a couple of work benches, a desk and his Mac, is covered in projects and newspapers. A work bench balances a tray filled with white paint.

He squats down, balancing on the balls of his feet. He runs his rolling pin of white paint in straight and precise lines on his projects. There are three rectangular blocks surrounding his work area. He shuffles among the three, rolling the pin on each of the rectangles dimensions. Peer pauses as he checks the time and exhales slowly. “I have one hour to finish painting these before my next class starts.”

Candee and Peer’s other housemates said he sometimes comes home between 9 and-11 p.m. because of his classes and work schedule. Other times, he doesn’t stroll in until 1 or-2 a.m. because he is tied up with assignments.

“We always tell him to let us know when he is done working, which is hard because he doesn’t always know what his hours will be,” Candee said. “The area we live in has no sidewalk and it’s poorly lit. We don’t want him to get hit by a car while walking home.”

She said that Peer says he forgets to ask and also doesn’t want to inconvenience them for a ride.

Peer said he knows when to be “stubborn” and push himself and when to take time out. Candee recalled a point last semester where he and his housemates had to take a break because of the level of stress from school were becoming too much.

“Between work and school assignments everyone was at their boiling point,” Candee said.

When things got to that boiling point, Peer and his housemates would either play the old fashioned joy-stick video games or put on a movie for a few hours. However, halfway through Peer would snap himself out of it and go back to his school work.

“He would get up and say ‘What am I doing?’” Candee mimicked. “‘I don’t have time to sit here and watch the movie, I have to get my work done.’”

Peer said at the end of the semester his artwork will be critiqued, determining whether or not he can continue in the BFA program for sculpture.

“He is super busy with his projects,” Erica Ascher, his housemate, said. “He is going to find out whether or not passes or fails the BFA program and whether or not he can move forward. If he fails he will only get a BFA in art education.”

He plans to continue his education after he graduates from SUNY New Paltz in the fall of 2017. He has a five year plan that is drawn out on his whiteboard at home.

Peer plans on applying to graduate school for an MFA or MA in electronic art or media in the spring semester. His dream school is MIT: “My big, big, big dream is to attend MIT and study art culture and technology, but the acceptance rate is very low. It’s tough to get in.”

He also wants to apply to the Peace Corps or Americorps and put his family background in woodworking to practice. He wants to give back to the community by volunteering and using the skills he has learned from his father, grandfather and classes.

Peer said his one piece of advice would be coming to grips with your situation. “If you haven’t come to grips with everything going on and you’re just trying to do it, you’re going to miss or forget things.” He said that knowing yourself and how you work is key.

A Closer Look At The Not-So Average College Student 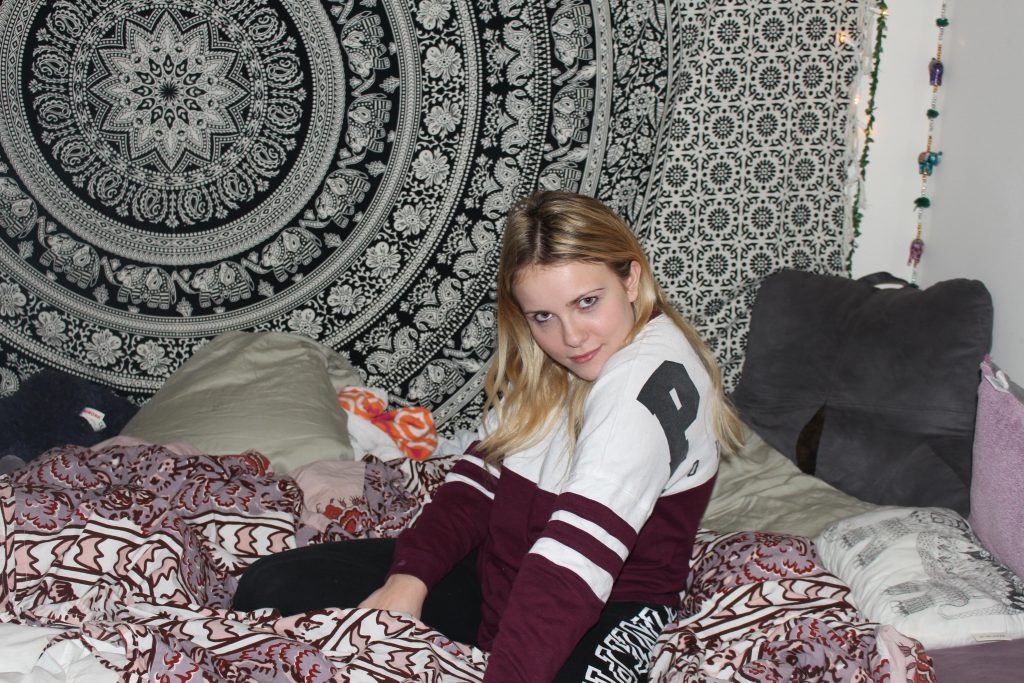