There is a laminated sign that hangs in the rear of the Convenient Deli in New Paltz. What used to read “Overnight Shift” has been scribbled out with a black marker and replaced with “Overwatch Shift,” a video game reference. Beneath the black zig-zag is a list of tasks for the employee who works the 11:00 p.m. to 7:00 a.m. shift.

The tasks on the list aren’t necessarily difficult or challenging. Most of the time, the employee is receiving orders or prepping food for the next day. The only real qualification for the job is that the employee be a night owl.

At 10:55 p.m. Mike Falsetta steps through the entrance of the deli, which sets off a pair of brass bells that hang from the door. Outside it is a cold and damp November evening, and flood lights pour onto a near-empty parking lot. Most of tonight’s customers will be students and residents who walk in from the immediate area.

He removes a pile of newspapers from their display and dumps them onto the front counter. Then he and a coworker separate the “filler”—ads and coupons— from the front page, which is stuffed into a bag and returned to the distributor for credit. A perfume sample falls from a copy of The New York Times.

Falsetta rubs the perfume on his wrist and neck. “Oh my god,” he says to the coworker, “this one is a double,” and flips over the sample.

He peers down at The New York Times. “I wish I didn’t do that,” he says. “Now I’m going to smell like Tom Cruise for the rest of the night.”

He ties off the bag and stuffs it behind the counter. It is 11:45 p.m., and the deli hasn’t been visited by any customers. Falsetta leans against the bain-marie and folds his arms. “I’m thinking of moving to Florida with my girlfriend,” he says. “I just don’t have a job lined up yet.”

The value of a college degree

Falsetta studied literature in college. Back in May 2016, he graduated from the State University of New York in New Paltz with a bachelor’s degree in English. He enjoyed his education, but it wasn’t always clear to him what he would do for long-term employment. So after graduation he kept his apartment in New Paltz and signed up for 40 hours a week at the Convenient Deli.

Falsetta is not the only college graduate working a job that doesn’t require a degree. In 2014, researchers from the Federal Reserve Bank of New York published a report that showed 44 percent of recent grads are “underemployed.” Furthermore, researchers found roughly 1 in 3 of the underemployed are holding down “good non-college jobs,” or work that pays roughly $45,000 a year.

Although he does not want his income published, if he worked full time for a year at the deli Falsetta would bring home well below $45,000.

Finally, researchers also point out that it is historically common for recent graduates to experience high rates of “unemployment and underemployment… because college graduates generally require some time to transition into the labor market.” But does this describe Falsetta? Is he just in a transition?

Three months ago, Falsetta began training to become a professional wrestler. This meant joining gyms and picking up the appropriate gear. He is not training to compete for medals in the Olympics. He has a different dream in mind. Falsetta wants to be a star on World Wrestling Entertainment, or WWE.

Every weekend he packs his 2003 Ford Focus and drives to Gleason’s Gym in Brooklyn. The gym is a magnet for aspiring athletes like Falsetta. Tucked inside Gleason’s is the World of Unpredictable Wrestling, a facility run by WWE Hall of Famer Johnny Rodz. In the realm of professional wrestling, Gleason’s is where stars are born.

And Falsetta wants a piece of the action. At Convenient Deli he is simply the guy who works the overnight shift. But at Gleason’s he becomes “Rollins.”

“Seth Rollins is one of the top guys right now,” Falsetta says. “He’s very good at what he does, and he’s one of my role models. When I started wrestling in Brooklyn, I had a blonde streak in my hair, and when he started wrestling half of his long hair was blonde. There were six Mikes already in the gym and they were like ‘you need a nickname.’”

The hair was a dead giveaway. “They saw my blonde hair and they were like, ‘Rollins, that’s what we are going to call you,’” he says. “To be nicknamed after my favorite superstar, it meant the world.”

But training at Gleason’s Gym isn’t necessarily a ticket into WWE. Like any sport, wrestlers must start at the bottom and work their way onto the mainstage. And this is where Florida enters the picture. Falsetta’s girlfriend has a cousin who is an audio engineer at Full Sail University, the home of NXT Wrestling. So she introduced him to her cousin over an email.

NXT is like the minor leagues of wrestling. It’s a subgroup of WWE and is where new performers hone their craft before they are invited into the big leagues. Fortunately for Falsetta, his contact at Full Sail has connections inside of NXT, which he hopes will help him land a job.

“I’m thinking of moving to Florida with my girlfriend. I just don’t have a job lined up yet.” – Mike Falsetta

Professional wrestling is a bit of an odd career choice for Falsetta. After all, he has never been a serious athlete.

In elementary school he played tee-ball on a town league. On one occasion, he crouched down to field a ground ball. The fingers of his glove rested on the baseball diamond, ready to stop the missile. A stray stone sent the ball flying towards a surprised Falsetta who caught it with his teeth. He tasted blood and brought his free hand to his lips. His teeth were still there, but his upper lip was split open.

His mother ran from the sidelines and picked him up. She brought him to a local hospital where she and her wounded athlete sat in the waiting room. On the far wall, Falsetta spied something he hadn’t seen before. On the television wrestlers leapt, dove and taunted one another under the cover of stage lighting. His mother thought wrestling was too violent and had him sit with his back to the television. He only saw the costumed men for a moment but became hooked on the action.

He was 12 years old when he saw wrestling again. But even then it was the less violent version of wrestling called Smackdown, and it was only when his two younger brothers weren’t in the room. He continued to watch wrestling until college when is attention became consumed with class work and part time jobs to pay the rent. By then wrestling was a distant thought.

Towards the end of his sophomore year a friend invited Falsetta to watch a wrestling promotion. He resisted. Prior to the invitation, he had already attempted to get back into the sport.

“Whatever promo they were trying to shoot it was absolutely disgusting,” he says. “I thought it was stupid. They were talking about how their hair gave them super powers. And I was like, nope. Not dealing with that.”

His friend persisted. There was a new generation of wrestlers in WWE, including Seth Rollins.

“I’m watching it and I’m like, these guys are good. Their character, their look, the way they wrestled in the ring. Everything was spot on,” he explains.

Falsetta says when he graduated from college, he didn’t have a plan in mind for long-term employment. Yes, he would continue to work at Convenient Deli to pay the rent. But what about long-term employment? What would he do then? He wasn’t necessarily going to follow a career that utilized his education.

It was precisely these questions that led Falsetta to a career in professional wrestling. Working the overnight shift at the Convenient Deli allowed him to meet all of his expenses. And it also freed up his days to workout at the gym. He found himself at a juncture where he could pursue any career of his choosing. But in that moment he opted to pursue a passion that had been building since that day in the hospital waiting room.

Back in the deli, Falsetta is again leaning against the bain-marie. His hair is dyed a loud shade of purple, and he is dressed in a t-shirt and jeans. A pair of red Converse sneakers stick out from beneath pant cuffs that aren’t quite long enough to reach his shoes. His clothes sit close to his body, and his moderate build belies his 6-foot frame.

Soon his coworkers will leave, and he will be left alone with a mixed cast of college students and overnight delivery drivers. He has just shared his plans to go to Florida and meetup with his girlfriend. Wrestling hasn’t even entered the conversation, and he talks in an amused way about the costumed performers who entertain tourists in Disney World.

He pauses for the moment, and looks out over the deli. His expression is that of someone mulling over a plan. Finally, he settles on a thought. “Maybe I will be a wizard for the rest of my life,” he says. “I think I would like that.”

Mon Dec 19 , 2016
By Holly Lipka It’s 4:45 p.m. on a Wednesday at The Gilded Otter. The large west-facing windows create a beautiful background for the diners as the sun sets behind the Shawangunk Ridge. It’s a relaxed evening before the dinner rush, with only a few people sitting at the wooden […] 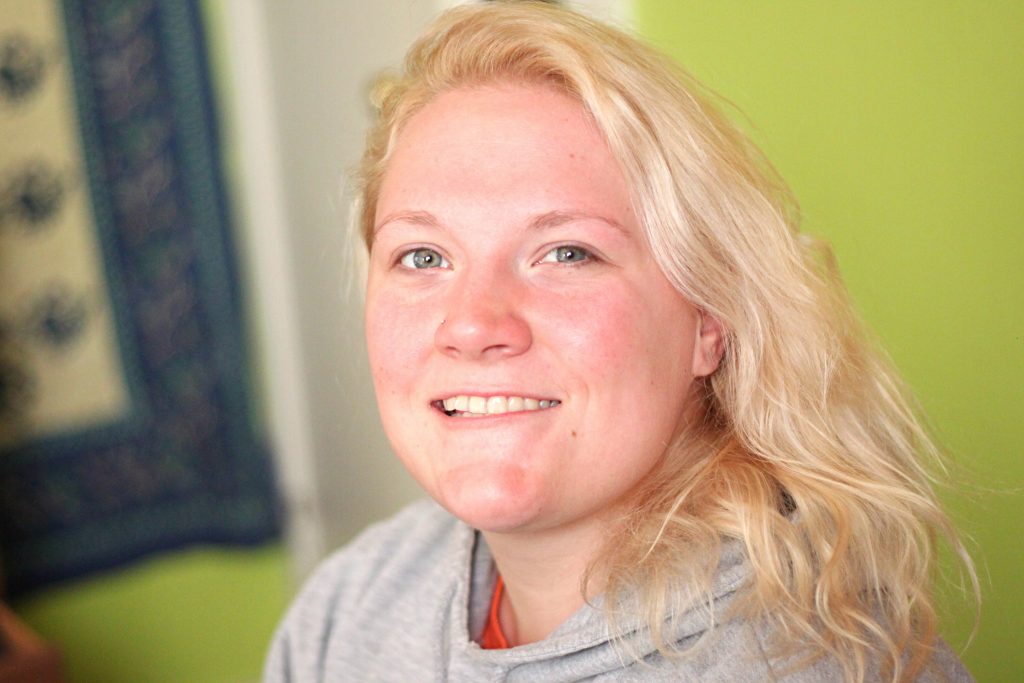