Unenthusiastic students shuffled in and out of the SUNY New Paltz polling station the afternoon of Nov. 8 in SUB 209, in what appeared to be a halfhearted and anticlimactic affair. First-time voters seemed to be treating their civic duty of voting as a chore. People stood in line at the polling station as if they were sitting in a doctor’s office or dreadfully waiting in line at the grocery store. It appeared that the most invigorating aspect for voters was the cupcake table that greeted them as they exited the polling station, which allowed some of them to smile in alleviation.

Kate Polinsky, a fourth-year visual arts major, described the voting environment as “not super enthusiastic,” believing people are simply voting because they feel that they have to. Polinsky said she voted today because it is such a substantial election that will have an enormous impact on the future for the next four years. As an independent voter, Polinsky doesn’t necessarily back anyone on the ballot because they’re all flawed, and none of their ideas exclusively appeal to her. However, she voted for Gary Johnson considering she disliked him the least out all of the candidates.

“I felt like I was powerful and that I had a voice,” she said. “I just missed the last presidential election so I’m glad that I was able to vote in this one. I feel like my vote matters more for this one because I don’t think anyone had a better chance to win the last one besides Obama.”

Mon Nov 14 , 2016
By Danielle Grossi On the final day to vote for the 2016 presidential election, students and faculty of SUNY New Paltz had the opportunity to vote on campus in the multipurpose room located in the Student Union Building. The crowd was a manageable size, and members of the campus were […] 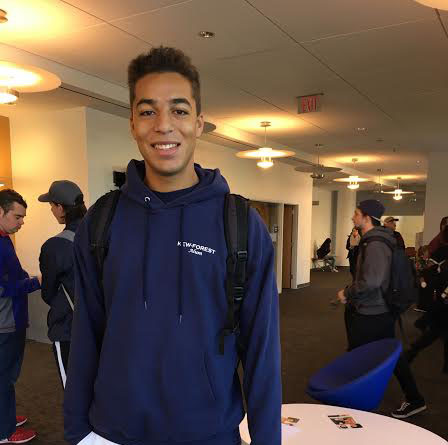