In a cluttered room on the third floor of the Student Union, the walls are lined with cans of chicken noodle soup, jars of Jiffy peanut butter along with a number of non-perishable food items. In what was once just an office, on-campus Pastor Dianna Smith has done away with her desktop computer to make room for the charitable donations left for students visiting SUNY New Paltz’s food pantry.

New Paltz students are provided with the opportunity to visit the food pantry from 1 to 3 p.m. every Wednesday in SU 322.

“There has been a significant rise in on campus students using the food pantry this quarter,” Smith said.

In the summer of 2012, a group of students who voiced their concerns about hunger and a lack of nutrition throughout the campus community approached Smith.

Smith, along with the New Paltz Student Christian Center’s (SCC) board of directors, founded the first ever on campus food pantry and opened its doors to students on Oct. 17, 2012. The pantry was originally supplied with donations from New Paltz faculty, staff and local churches but has since become a member of the Northeast Regional Food Bank.

The pantry became a member of the food bank in Oct. 2013, and placed its first order on Nov. 1, 2013. Smith said the food bank stresses having nutritious food options for the people who come to see them, and that “their philosophy carries over to what we are able to provide students with here.” She feels more confident about the students overall well-being when she can place orders to the food bank and provide them to the pantry’s visitors.

In addition to food items, Smith said the pantry was also able to distribute gloves, hats and scarves through donations of the New Paltz staff.

Smith said she is grateful for her opportunity to provide for students in need, and that directing the food pantry is a rewarding experience for her.

Thu Apr 24 , 2014
With an array of talented artists on campus, Zach McGrath takes a look at some students work this semester. Made by Zach McGrath. 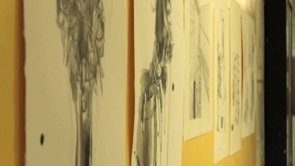