Some college students continue attending services and stay dedicated to God while attending SUNY New Paltz and feel they are now responsible for their own faith.

“It’s a bit harder [to attend services] because my parents aren’t forcing me to go but luckily I’ve been able to push myself,” said fourth-year secondary education major Kathleen Lane. “I think SUNY New Paltz has made my faith stronger since it’s all up to me now.”

The spring 2011 National Survey for Student Engagement (NSSE) shows that out of 410 first-year students, 7 percent said they always participate in activities to enhance their spirituality during the school year at SUNY New Paltz and out of 433 fourth-year students, 6 percent said the same. Whereas a Pew Forum on Religion & Public Life shows that the national average among Americans ages 18-29, one-in-four say they are currently affiliated with any particular religion.

Although the numbers on campus seem low in comparison to the national average, the spiritual dedication among students is vast. Students attending services regularly find it helps them maintain a positive outlook and keep their priorities in line, even if they originally started going because of their parents’ expectations.

“When I was a freshman I thought about how my mom would be upset if I stopped going to church once I got to college,” said Erica DeLibero, 23, a second-year graduate student studying literacy education. “Once I started attending Catholic Campus Ministry, I found my motivation to keep practicing my faith as I was surrounded by so many people with the same beliefs as me. Also I realized that I need mass to get me through the week—it helped me get through college.”

Many students feel that religion and God helps them stay together throughout college. Nicole Coscio, a fourth-year psychology major, reverted back to religion particularly when facing struggles.

“Some life challenges have caused the shift back into my faith. I always face heart breaks that caused me to turn to negative activities,” Coscio said. “My religion is structured so well that it keeps me grounded and focused on what is really important in my life. I feel that when everything is going wrong, the Catholic church is the one consistent body in my life.”

CCM has been running for 10 years and is dedicated to encouraging the catholic faith among students through weekly meetings, monthly student mass at St. Joseph’s church, retreats, parish involvement and community service, said Hank Grimsland, the campus catholic minister.

CCM’s main event each year is a mission trip to the Dominican Republic in the spring called “Alternative Spring Break,” where they build chapels and restore houses. Grimsland said this event is powerful in meaning to those participating because they do not only get to visit a different country but provide aid while there.

“I’m expected to go on a mission trip to the Dominican Republic and Haiti in May after I graduate,” Coscio said. “I can foresee it already that it will change my life for the better.”

Other clubs on campus work in collaboration with CCM in order to foster a welcoming environment. For example Hillel, a Jewish club on campus, participates in many events with CCM, Grimsland said. According to Grimsland, they hold annual inter-faith dinners and various events such as apple picking in the fall.  Coscio also said CCM currently shares an office with Hillel, making collaboration very easy.

Rose Faber, a fourth-year Women’s studies major, and president of Hillel, said there are many interfaith events and activities going on around campus and there is not much tension.

Although SUNY New Paltz has many clubs creating a platform for students to maintain their faith and have social interactions with those of the same view, some students feel the liberal atmosphere is not welcoming toward their beliefs.

Carina Secchitaho, a psychology alumna, said she believes the SUNY New Paltz community is open and accepting of all people and beliefs, but feels marginalized in her classes due to the negative connotations attached to religion as a whole. Even though this may be a problem it does not stop students like Coscio from practicing their religion and keeping faith in God.

“I feel that no matter how liberal or conservative a school is you should stay true to your faith,” Coscio said. “Sometimes I find it a struggle professing my faith publicly in fear of ridicule but at the same time who cares? I know in my heart I don’t ridicule others for their faith or traditions and if someone wants to do that to me then it’s their problem not mine.”

Thu Dec 8 , 2011
SUNY New Paltz students marched through campus holding handmade signs with slogans such as “My body, my choice,” “Consent makes me wet” and “My dress does not mean yes” on Sunday, Dec. 4 during the first Walk of No Shame. The walk originated from a group assignment urging activism against […] 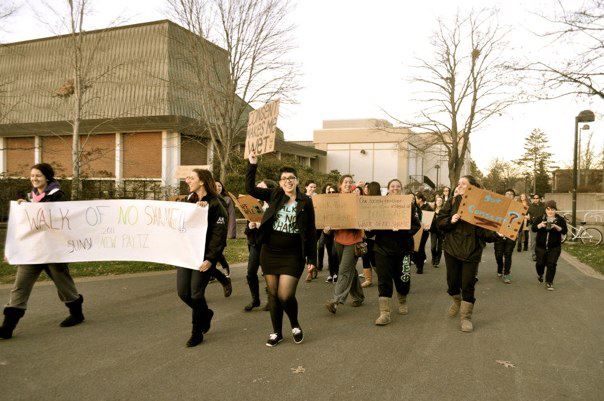