During the annual celebration of Communication and Media Week, students and faculty welcomed Pulitzer Prize-winning New York Times columnist Dan Barry to the State University of New York at New Paltz for a discussion about his career and the changing media industry.

Barry said he “bears witness” to a situation that the average citizen may not find themselves involved in and would otherwise be unaware of his work as a journalist.

Barry provided a collection of anecdotes during his lecture at the College Terrace. He began with a story about a state trooper in northern Kansas who pulled him over and asked Barry, who had a New Jersey driver’s license, what he was doing there.

According to Barry, this officer prompted him to ponder his own circumstances.

“After he left, it dawned on me: you don’t really realize or think about what you do for a living,” he said. “And I thought about it, what the hell do I do? And I’ve been doing it for 30 years. What I’m doing is bearing witness.”

In his writing, Barry explored both the terrorist attacks of Sept. 11, 2001 and the aftermath of Hurricane Katrina. He said in his work, he wants to focus on the human element and thinks it’s important to honor those he interviews.

Barry also discussed principles of journalism, such as the struggle to remain objective in chaotic situations.

When he was surveying the damage to New Orleans, La., post-Katrina, he came across a body. Over the next few weeks, it sat in the middle of the road covered by a tarp. Barry said remaining objective in the face of tragedy is a challenge.

“We can talk about objectivity and all that kind of stuff, but if I were able to describe my emotions at this point I would say, pissed off!,” he said. “Can’t help it, America. It’s like the Marines – you don’t leave your dead. They’re all over the damn place because we can’t figure it out. We can’t figure it out in America.”

His column, “About New York,” ran in the Times until 2006. He now writes a national news column called “This Land,” which is printed in the New York Times every Monday.

Barry credits his childhood experience as an influence on his career choice.

“A mother who is telling stories and a father who’s raging against the system,” he said. “It’s almost predestined what I’m going to be.”

Barry also looked to the future by discussing the integral bond between images and words in the new media age. As an example, he showed a multimedia supplement to an article he wrote about former burlesque dancers that he said added a new element to the story.

“[We are] marrying words and images as we enter this new age,” he said.

Reflections from the Factory

Sun May 2 , 2010
He stood in front of the photographs and spoke in a monotone voice, never removing his sunglasses. He wore a black button-down shirt and his fingers were laced with silver rings. His graying beard reached the middle of his chest. He was the photographer responsible for the silver color of […] 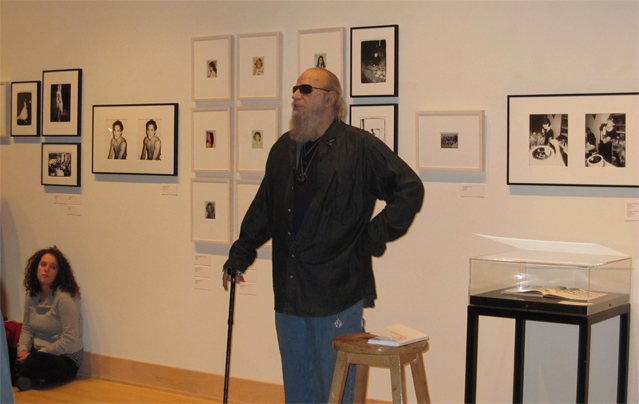