So here I am – two more weeks until I’m completely finished with college.

After years of late nights in the library and countless hours spent buried under books, all I can think is: What now?

I am well aware that this is a question most college students acknowledge as graduation approaches, but I can’t get it out of my head.

I am a media management major and journalism minor and I want to write for a living. I read The New York Times every day and I worship the ground Maureen Dowd walks on.

How do I get there?

I know all the cliché answers: “pay your dues” and “never stop writing.”

I understand that I am not the best candidate for a full-time New York Times columnist, but there must be more to it than dues and clips. I’m OK with working for success, but I have a serious problem with the issues plaguing today’s journalism industry.

Newspapers are going under left and right, with many others hanging on by threads. The industry is undergoing massive layoffs in an attempt to do more with less.

I am an intern at the Poughkeepsie Journal. Before the semester, I was under the impression that if I proved myself to be skilled, respectful and competent, I might walk away with a job. Once the internship began, I discovered the Journal had recently undergone a series of layoffs – the prospect of a job seemed less likely.

How is it that a medium designed to keep the public safe and informed – a medium that my editor, John Nelson, considers “essential to democracy,” is struggling this much?

Facebook, a private company with 850 employees, made over $50 million last year. The Washington Post Company, a news company with about 20,000 employees including subsidiaries made about $65 million last year. Sure the Post made more, but The Washington Post has been gaining credibility since the late 1800s – Facebook is a novelty Web site that allows users to keep in touch with high school friends they never really liked.

Like Facebook and most Web-based media, newspapers’ income derives predominantly from advertising. The current transition from print to the Web has destroyed some newspapers and stalled many others. But there is no more time left for floundering – surviving as a Web-based medium is possible. If Facebook can afford to comfortably pay each employee over $50,000 (before taxes) a year, why can’t local newspapers hire new reporters?

I understand that America is not exactly the most economically stable country in the world. I also understand that plenty of people don’t get their dream job right out of college. But as money in the news industry becomes more and more sparse, hopes of landing my dream job are beginning to fade.

In an article titled “Sorry, Senators: No Newspaper is Worth Saving in its Entirety,” Advertising Age columnist Simon Dumenco suggests newspapers shift to a nonprofit business model. That is to say – ditch the idea of large revenues over expenditures.

Dumenco suggests that newspapers ditch puff stories and focus on serious reporting, which I agree with. Dumenco also writes that “if public dollars do end up getting (indirectly) deployed in the form of tax relief to papers reconfigured as nonprofits, they absolutely shouldn’t be keeping home sections or horoscopes or even sports sections afloat.”

I’ve heard this idea before, and it’s a feasible one in terms of the survival of for-profit independent newspapers. A nonprofit model coupled with section cuts, implies more money and more focus within the business. But it also means fewer jobs.

Am I going to write for a living or not?

I have been trying to make sense of this issue for months. Is there any feasible way that a local newspaper would be interested in hiring an inexperienced reporter fresh out of college?

I have clips, I have the chops and I have desire. But why would a publication take a chance on me when there are seasoned veterans lined up before me?

I’m horrified of what my future might hold. I plan on spending the next six months looking for writing gigs – even freelance – and studying for the GREs.

Although many professional journalists do not have master’s degrees and John Barry, the music writer at the Poughkeepsie Journal, considers graduate school a “cop out,” it might be the safest alternative in regard to the struggling medium and my struggling wallet. If I go to graduate school I’ll be able to defer my loans while “paying my dues” and continuing to pump out content.

One day, when I’m a real grown-up, I’ll be a professional writer.

Are Students Safe on Campus?

Thu Dec 3 , 2009
“Do you know?” Campus fliers and advertisements with this campaign have been spread across the SUNY New Paltz campus. The campaign is a response to sexual assault by Resident Life officials and University Police. In the month of September alone there were two cases of sexual assault – one on […] 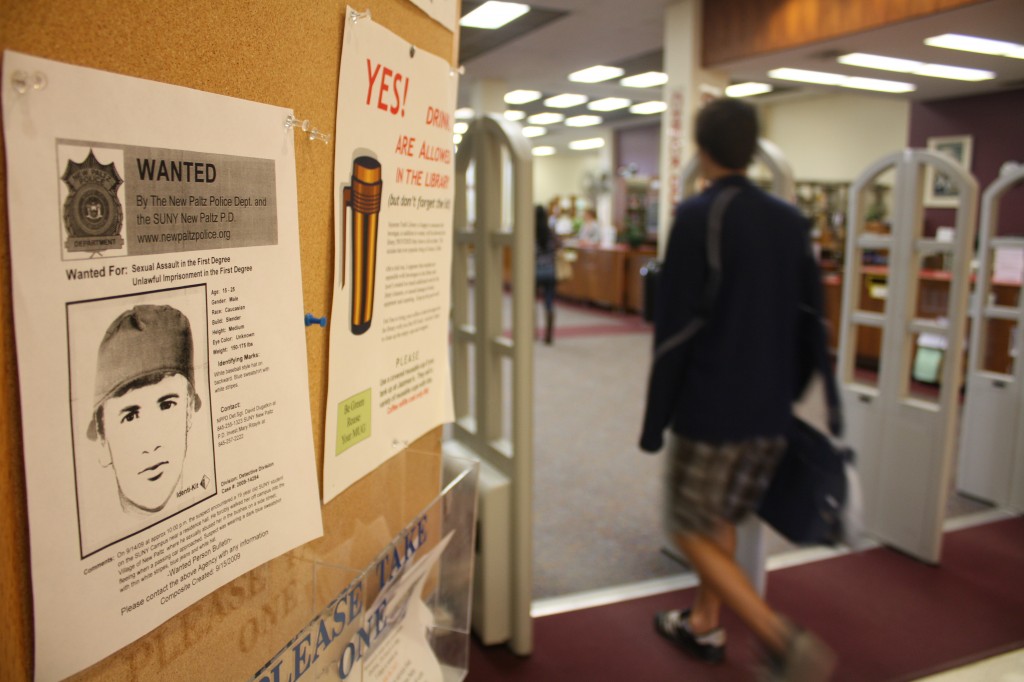