“Do you know?” Campus fliers and advertisements with this campaign have been spread across the SUNY New Paltz campus. The campaign is a response to sexual assault by Resident Life officials and University Police.

In the month of September alone there were two cases of sexual assault – one on campus and an attempted case that started on campus and continued into town.

Corinna Caracci, the director of Residence Life, has developed a sexual assault committee in reaction to these incidents. The design of the committee is to utilize campus services for education, awareness and prevention of such incidents.

“I really want to step it up a notch. We’ve had things in the past, but really we need more,” said Caracci. “Really taking everything we’ve already done and bringing it to one place that could really monitor it and really saturate the market out there, saturate the residence halls with information and education.”

The “Do you know?” campaign is a part of Caracci’s plans. Posters in the bathrooms and residence halls that advertise against abuse, harassment and sexual assault. Each poster includes phone numbers that students can call for a range of on-campus services. These services are being used as the backbone of the campaign.

Visually, the most predominate program is the emergency blue light system across campus, which is intended to provide immediate contact to the University Police. There are approximately 60 blue lights across campus.

“Within every 50 feet you should be able to see one,” said Caracci. “At this point when I do walk on rounds with students and staff to look and see where the blue lights should be, and there is really not one where we’re like, oh, there’s not one there.”

Students, however, have a different take on this emergency system.

“I know about the call boxes but I feel like they would help more if they were in remote places,” said third-year art education student Colleen McGowan.

McGowan is not the only female student on campus that has been taking precautions. Jasenka Hrustunanovic, 21, is a resident assistant in Capen hall who also voiced the need for caution. In the months of September and October she held two programs for residents with the University Police.

One of Hrustunanovic’s programs was a introduction to Rape Aggression Defense (R.A.D.) classes that are offered on campus, with Officer Johnny Coxum. These classes, provided by the University Police, teach women defense techniques.

“If I have no choice but to walk alone I have my pepper spray, and I only walk when I can’t reach campus escort,” said Hrustunanovic when discussing awareness of her own safety.

The campus escort, also sponsored by the University Police, gives students free rides around campus from 9 p.m. to 2 a.m. during the fall and spring class sessions.

The campus has also provided a range of counseling through the Psychological Counseling Center, and peer counseling at Oasis and Haven.

The intention of Caracci’s campaign is to bring these services together to make safety on the campus. The hope is that an aware campus will make for a safe campus.

Thu Dec 3 , 2009
Four hours of work in the Foreign Language Department in the morning, four hours of class in the afternoon, three hours of reading at night. Add on two hours to study French and Arabic, and a possible sorority meeting before bed. Look hectic? Seem stressful? This is a typical Thursday […] 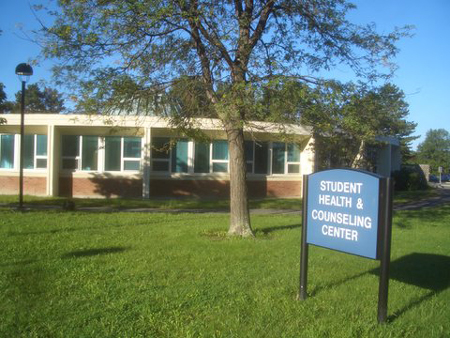