The team was so inadequate when it came to lethally injecting Broom that they needed to take a “break” after two hours of failed efforts, said Broom’s attorney Adele Shank.

If it sounds cruel and unusual, that’s because it’s torture.

Broom’s lawyers say that his first execution attempt was cruel and unusual punishment. They say executing him now would result in losing evidence for a broader lawsuit challenging the constitutionality of Ohio’s lethal injection procedure.

One, punishment is cruel and unusual when it degrades human dignity by its severity.

It’s true that capital punishment has evolved since crucifixion, impalement and boiling to death.

But, let’s be serious. The idea itself is hypocritical.

The evolution of capital punishment?

There’s no evolution to be had. It’s primal and inhumane. It’s an assault on humanity—to decide which prisoners live on in jail and which ones die by whichever prescribed method seems to tip-toe around the label “cruel and unusual.”

How did lethal injection do it anyway?

Those best qualified to carry out a lethal injection are medical professionals, but to execute is in direct conflict with ethical values. When speaking with The New York Times, Dr. Jonathan I. Groner, a professor of medicine at Ohio State University, termed it the Hipprocratic paradox.

Responsibility for lethal injections falls on the shoulders of execution teams. These teams receive training in injecting and IV use but still might not be prepared for obese prisoners or prisoners whose veins have been destroyed by drug use. Their inadequacy tortures prisoners, like Romell Broom, for up to two hours: waiting to be killed.

More bothersome than staff quality, is that components of the lethal injection cocktail are considered inhumane when euthanizing animals.

According to the American Veterinary Medical Association, paralyzing agents like pancuronium bromide, used in lethal injections, are inhumane because of their potential for masking pain. Yet in Tennessee and Texas where pancuronium bromide is banned for use on animals, it is still used to lethally inject prisoners.

Two, a punishment is cruel and unusual when inflicted in an arbitrary fashion.

While death penalty sentencing isn’t wholly arbitrary, there’s enough arbitrary factors contributing to sentencing that it has become a problem.

The Death Penalty Information Center, reported that in states that reviewed the relationship between race and capital punishment, that 96 percent of the states show a pattern of discrimination based on the race of defendants, victims or both.

Statistics have proven too frequently that sentencing standards fail to guide jurors proficiently in decisions of capital punishment. Jurors fall back on prejudice notions, conscious or not, to determine which criminals are the worst and which victims are most deserving of sympathy.

Three, a punishment is cruel and unusual if clearly and totally rejected throughout society.

If there ever were such a thing as humanity in the evolution of the death penalty, I guess we’ve done it.

We have evolved from people who took part in executions as if it were sport. And have transformed to be a culture that would prefer to watch those we deem perpetrators die silently paralyzed in what appears to be a pleasantly comatose state.

That doesn’t make much sense.

The only evolutionary step left for the death penalty is abolition.

And the rest of our global community has taken that step.

According to Amnesty International, more than two-thirds of the countries in the world, 137 nations, have abolished the death penalty in law or in practice. This includes nations like France, Canada and Great Britain, to name a few.

Capital punishment is all but totally rejected throughout society.

Four, punishment is cruel and unusual if it’s patently unnecessary.

As if those points weren’t enough, there are more cost effective options that promote a sense of humanity and community, rather than promoting division and discrimination.

In July 2008, California’s Commission for the Fair Administration of Justice said that their current justice system cost $137 million per year, but it would cost only $11.5 million for a system without the death penalty.

According to the commission, there are additional hearings and appeals to ensure that each inmate is entitled to a fair trial. In California, death row inmates cost the state $90,000 per inmate each year. In 2008, they had a death row population of 670 inmates, costing the state $63.3 million each year.

Another study from the Death Penalty Information Center found that death penalty cases cost an average of $10 million or more annually than life sentences.

Couldn’t that money be better spent on crime prevention or mental health treatment? Or education? Or rehabilitation?

Couldn’t it be spent better on anything other than the botched execution of Romell Broom?

Sure, you can’t apply Justice Brennan’s concepts absolutely to capital punishment. But you can certainly use it as a Litmus test, and that’s telling enough.

It’s cruel and unusual or it’s not. There’s no half-way or in between on this issue.

Do we really want to be a society where we sentence people to punishment that’s ¾ cruel and unusual?

Wed Nov 18 , 2009
Oil. This is the substance we as a nation are addicted to. We’ve even started a war over it. Josh Tickell does an amazing job at illustrating this in his documentary “Fuel.” The documentary has won various film awards but most notably, one at the Sundance Film Festival for the […] 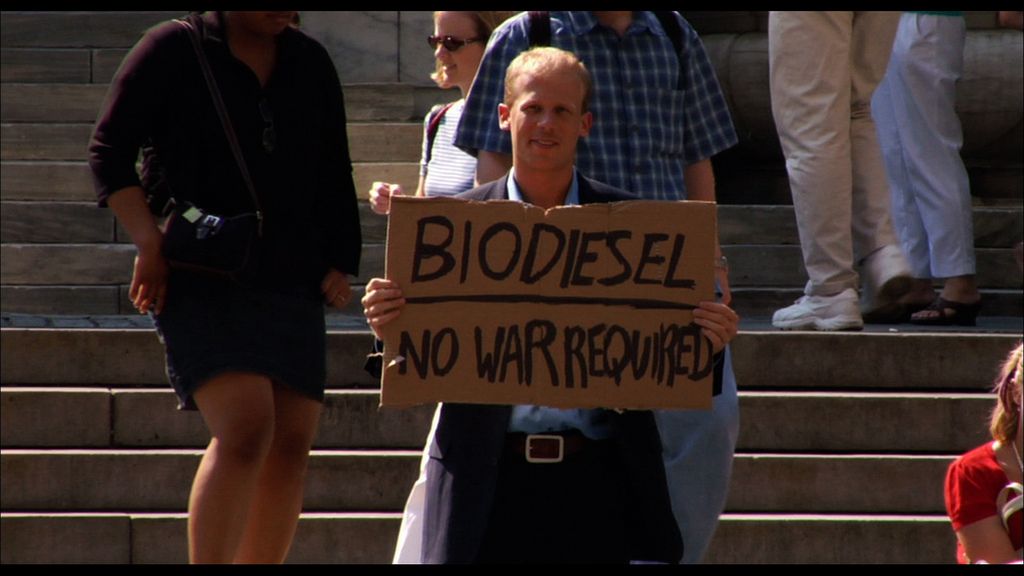