Edited and packaged by Lara Morales

“Regardless of the pandemic, I would have entered a virtual horse show simply for the fun of it.”

Kristy Doyle wasn’t expecting to show this year because her mare had just given birth to a foal. However, when virtual horse shows were created in response to the COVID-19 quarantine, she jumped at the chance to enter both her horses in the class.

“I love having the chance to still show and add a little humor with foal shenanigans in the background,” Doyle said.

As a result of the COVID-19 pandemic, virtual horse shows have emerged across the country in an attempt to make up for what the community lost when regular season horse shows were canceled.

When the coronavirus hit the U.S. in early March, one of the things the horse show community feared for was their competitions—something many of them rely on for financial income and social community.

The FEI World Cup Finals were canceled on March 13—the same day USEF announced a suspension for all USEF-owned events for 30 days.

Due to large crowds and inability to maintain social distancing guidelines, the U.S. Centers for Disease Control and Prevention (CDC) recommended that USEF cancel all of its events until April 13. This suspension was later extended to May 3.

In addition, USEF stated in their press release that “for those competitions that choose to run and can do so in accordance with the CDC, State, and local recommendations, there will be no accumulation or points, scores, money won, qualifications, or rankings toward any USEF award programs, USEF owned events, or selection to a US team during this time period.”

With the loss of a major part of the spring show season, equestrians looked for a new way to find community support and show off what they had been working on all winter. Thus, the virtual horse show was born.

All across the Internet, virtual horse shows have popped up in an attempt to fill the void caused by the cancelation of nearly all horse shows throughout the country.

The Virtual Horse Show group on Facebook was created on March 19 by Charlie Cole, the owner of Highpoint Performance Horses, and currently has over 17,000 members.

“I have discussed doing online training stuff in the past but we have always been so busy with our training, showing, breeding and barrel horses that it was never the right timing,” Cole said. “When COVID hit, I had the thought to have a virtual horse show. I told my good friend Angela Fox my idea, and she liked it. So she and I started the page, The Virtual Horse Show, that afternoon. I asked her to sketch a showmanship pattern and the next day, The Virtual Horse Show had its first class up and running! It took off like crazy!”

To enter, riders perform a pattern set by Cole and upload a video of it to the Facebook group. Each class has an entry fee of $20 and is judged by Cole. Most classes even have prizes for those who place—from monetary prizes to belt buckles and headstalls.

The Virtual Horse Show is open to all breeds of horses and offers many classes such as trail, horsemanship, hunter hack and even a bloopers class.

Cole emphasized that this is also a time to focus on training your horses and getting in extra practice before the show season eventually picks back up.

“I think the most important thing is to try to be positive, try to do the right thing by not letting it spread, and to take care of your family and your horses and to stay focused on that,” Cole said.

The Virtual Horse Show has expanded across borders and received submissions from all over the world, like Lena Wolff from Germany.

“The Virtual Horse Show is an amazing idea to show how good you have trained your horses,” Wolff said. “I think it’s a little bit harder for the European participant because we have a little different [idea] between how the horses are ‘ready’ to show than the Americans but I think it’s super nice to see how other judges—judges you don’t even know—judge you and your horse.”

Another online horse show to emerge during the COVID-19 quarantine is hosted by State Line Tack through their Facebook page.

Their online horse show, called the “Seclusion Showdown,” started its first of four sessions on March 26 and ran until April 1.

This free online horse show was created to “give all riders a place to show during this unique time when most are on Stay At Home orders,” said Frankie Sunderland, social media manager for State Line Tack. “We wanted to give everyone a free outlet to compete digitally. To do this we are trying to put together sessions that are inclusive of as many breeds/disciplines as possible.”

For the first session, State Line received over 3,500 entries. One judge placed all 10 in-hand classes from first to fifth place, and every rider that placed was sent a custom ribbon. The winner of each class also received an extra prize.

As regulations for quarantine became more strict, State Line adjusted their rules for the Seclusion Showdown to only allow photo entries instead of videos. These photos could have been taken at any time.

“While we understand that some of you may have your horses at home and are able to complete videos for pattern entry classes, we know that most do not have this luxury,” State Line said in a released statement. “We do not want to encourage riders to leave the safety of their homes in order to film videos for our online show. We also want to make sure that we are not increasing the volume of horse related injuries during a time when our healthcare system is already overwhelmed.”

One exhibitor from the Seclusion Shutdown, Elise Slayton of Pittsburgh, PA, was happy for a chance to brush off the dust on her old show horse, George, and submit a video for the showmanship class.

“Since George has had a long history of lameness and behavioral issues, I took him out of ‘retirement’ to enter the class because it was low risk, and didn’t come with any expectations,” Slayton said. “It was something that he and I could do together, since we both have been out of the game for so long. Regardless of the pandemic, I would have entered a virtual horse show simply for the fun of it.”

Slayton said the free Seclusion Showdown intrigued her because it didn’t have any of the costs of a regular show; there were no trailering, entrance, trainer or stall fees.

As COVID-19 causes an economic crisis to the U.S., these virtual horse shows are a way for the horse community to get together with minimal-to-no cost. Despite having in-person shows canceled and being required to stay at home, the horse community has found its ways to support each other in an uncertain and unprecedented time.

Both The Virtual Horse Show and Seclusion Showdown are still open for entries, and can be entered through their respective Facebook pages.

I have ridden and shown horses my entire life. With stricter guidelines, this quarantine has been hard because I haven’t been able to get out and ride. But talking to equestrians who have participated in these shows and the people who run them has been wonderful. It’s inspiring to see the community come together and support each other when this is usually such an individual sport. Even with something as simple as posting videos to a Facebook group, it allows equestrians to come together and get their mind off of what is going on in the world today.

Rachel Muller is a fourth-year journalism major and international relations minor from Rochester, New York. She is set to graduate in December 2020 and enjoys writing about news, the environment and travel.

Safe Shelter is Not Always a Home

Mon Dec 7 , 2020
Two disabled homeless women struggle to survive and search for affordable housing, in Kingston, during a global pandemic. 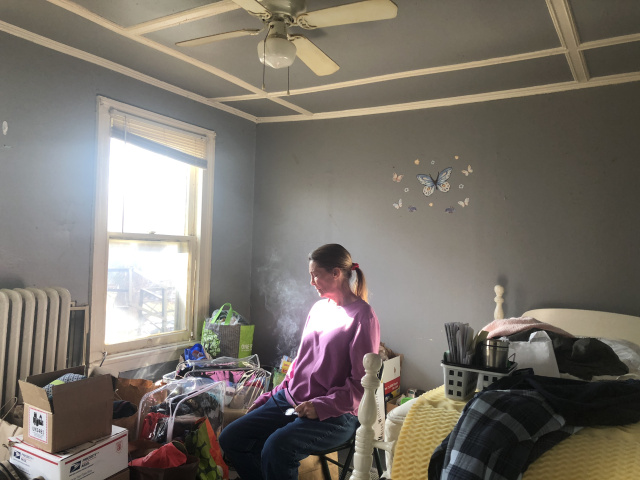