Erika Perilla Molina sits in the SUNY New Paltz library as she tries to study for an international politics exam and write two papers that are due by the end of the week. She’s been sitting at the same table for at least three hours, but thankfully it’s the table with the outlet. She doesn’t have food, water or even a pack of gum. But she does have her cell phone, her laptop and with a strong Wi-Fi connection there’s no wonder why she hasn’t even cracked her books open to study.

“I don’t consider myself to have a problem,” said Molina, an undeclared second-year SUNY New Paltz student. “But if I had to think about it then I am addicted to social media.”

Social media addiction has become recognized and acknowledged only recently. Addiction is when someone becomes dependent on a substance or a thing to the point that their daily lives are interrupted. This can be done by alcohol, drugs, sex, or in this case, social media and the Internet.

Internet and social media addicts suffer from lack of social skills, the ability to be vulnerable or control their emotional states, bad self-care, and intimacy issues, according to Hilarie Cash, cofounder of Internet/Computer addiction services and the reSTART Internet Addiction Program.

Cash explained that such an addict has trouble developing confidence and doesn’t notice that they lack even the simple skills of vacuuming the living room or taking a shower.

“The research is clear that the more they spend online, the more depressed and anxious they get,” Cash said.

While Molina is weighing her options about what major she should take and what classes interest her the most, her brain is currently attracted to Snapchat and Facebook. Believe it or not, a majority of people studying in the library have their phones out or an extra tab on their laptop open for their social media feeds.

According to a Pew Research Center study, Facebook remains the most popular social media site, with 62 percent of the American adult population using Facebook and more than half of those adults logging onto the site daily.

But does daily Facebook use constitute as an addiction?

Dr. Larry Rosen, a research psychologist who specializes in the psychology of technology, says not necessarily; there’s a distinction between addiction and obsession.

According to Rosen, social media use is a combination of addiction and obsession. Addiction is an act of pleasure stimulated by chemical responses in the brain, while an obsession is purely psychological.

“I think people check Facebook all the time as a need to know, so on the surface it looks like an obsession, so you are checking to reduce your anxiety. That way you don’t miss out on your need to be in the loop or your need to know,” Rosen said. “Chemicals in your brain build up where you feel anxious and the anxiety says to you check Facebook, Instagram, and you do it to get rid of the chemicals to reduce the anxiety.”

Most likely social media and Internet addiction begins with an obsession, but it can be different for each individual, according to Rosen.

The American Academy of Pediatrics calls “Facebook depression” a common reaction to people using social media more often than they should which makes functioning without it difficult.

This is a familiar reality for Molina.

“I’m always on social media no matter where I am, whether I’m in class, eating, or even in the bathroom. I go on social media a lot but honestly it depends on the day. I used to love and always use Facebook and if my laptop dies I need to find an outlet and charge it or even my phone because I’m bored so I go on Facebook,” Molina said. 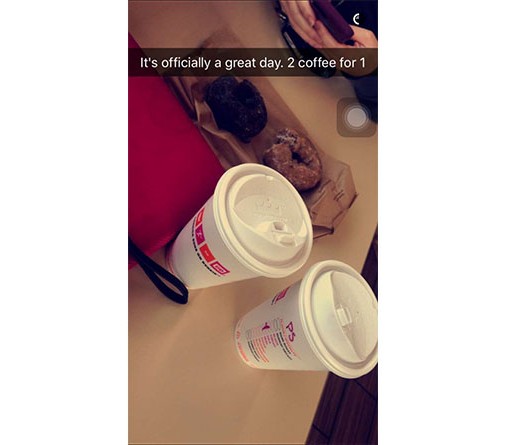 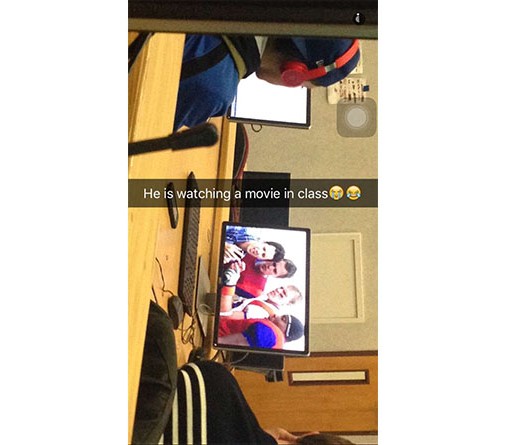 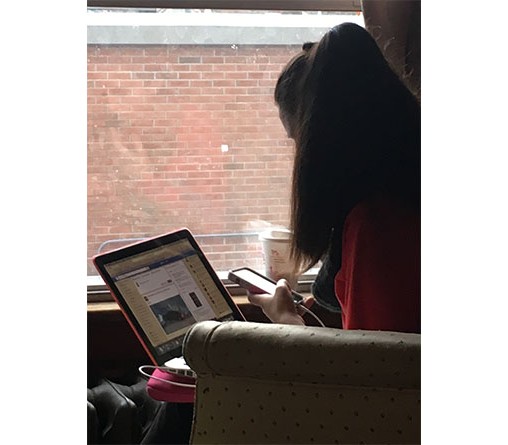 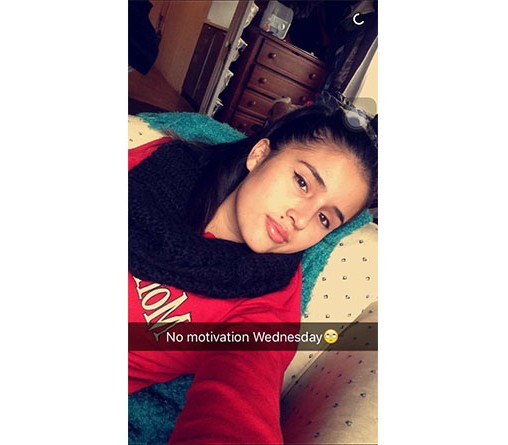 Molina is one of the many social media users that make up more than half of the population. According to a study done by the American Academy of Pediatrics, using social media is the most common hobby among young adults with 22 percent of teenagers logging on at least 10 times a day.

Molina can be seen either stalking people on Facebook or taking snaps on Snapchat. Her Snap story is always 100 seconds long with five seconds for each snap. But Molina emphasizes that she makes sure it’s something interesting she’s snapping.

“The other day in class this kid was watching a movie while the teacher was lecturing, like a full movie on his laptop and I was like ‘I gotta Snap this.’ So I took a video snap of it and posted it,” Molina said.

However, not all social media addicts enjoy posting all day.

Missy Waters, a fourth-year student at SUNY New Paltz, frequents fitness and health sites more often than she does posts, but she still spends all of her spare time distracted by social media.

“I would say Instagram and Facebook are my favorite,” said Waters. “My favorite on Instagram, that I like a lot, is for fitness because there’s cool recipes and workouts, and I can also see what my friends are doing from high school and back home.” “We take them away from media long enough so their brains can go back to social normalcy,” said Cash. “If you take the drug away, the brain brings back receptors to chemically balance out, which takes about three weeks.”

By that time Internet and social media addicts are aware of their problems and commit to not re-engaging in unhealthy usage; counselors are provided who support them and educate their loved ones. They even encourage their patients to go out into the world and develop a new identity, according to Cash.

But such facilities for Internet and social media addiction are few and far between. reSTART is the main facility in the country, followed by programs and treatments plans provided by hospitals and outreach programs, according to Cash.

One alternative form of rehabilitation Rosen promotes is weaning yourself off of social media in intervals like slowly quitting cigarettes. First, he suggests, log off of all your accounts for 15 minutes, then the next day try for 30 minutes and continue until you don’t feel the need to be trapped in a screen.

It is possible that people choose to not spend their days on social media or even on their phones. They use social media in a minimalist manner as a way of staying updated with friends and family.

Danelle Haner is a fourth-year psychology major at SUNY New Paltz and she would rather spend her time physically doing something then attached to a screen. She doesn’t see the point in living life in a virtual reality.

She said that staying away from social media makes her more aware of school, work, and herself.

“I’m more physical and spiritual with life that I don’t have the care for what everyone else is doing,” Haner said.

As she watches people around her become more engrossed in social media, Haner prefers enjoying the outdoors and being a part of yoga groups.

“I understand it helps with networking and communication but there needs to be a balance,” said Haner.

According to Cash, behaviors that are classified as Internet addiction, however, are considered normal behavior that doesn’t need to be addressed. Because it’s become such a prevalent part of everyday life, children learn from parents who don’t realize the bad example they are setting, she said.

But just like every addiction, acceptance and recognition of a problem are the first step to understanding the problem and changing your lifestyle.

When it comes to social media addiction in the digital age, we may just be a society in denial.

Mon Dec 7 , 2015
In Howard Good’s Being Digital class, students were asked to visually interpret E.E. Cummings poem ‘pity this busy monster, manunkind’. This video uses subtle images to represent the “progress” of modern technology and how it is increasingly disrupting lives through consumerism and entertainment. Filmed and edited by Liz Gaschler and […] 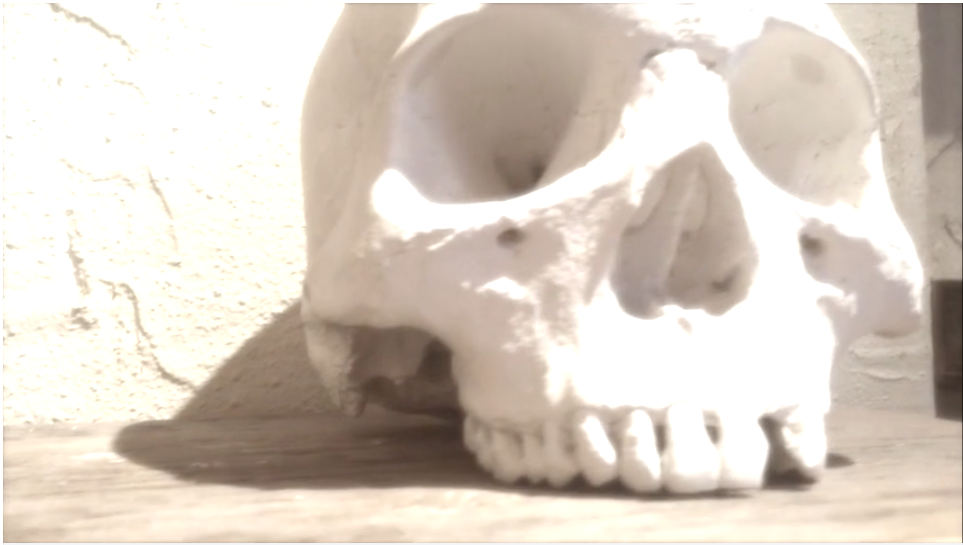