Legendary New York City rapper Nas built his reputation as a chronicler of inner-city street life. He is now scheduled to perform in SUNY New Paltz’s Elting Gym on May 7 as part of the school’s annual Rock Against Racism festival.

Student organizers from SUNY New Paltz’s chapter of NORML/SSDP (National Organization for the Reform of Marijuana Laws/Students for Sensible Drug Policy) originally planned for Nas to perform on the Old Main Quad, which is where the rest of the Rock Against Racism event will be held. However, a decision made by David L. Rooney, the Vice President of Student Affairs, has moved the Nas performance to the Elting Gym.

Members of NORML/SSDP managed to collect over 1,000 signatures from students of the University, petitioning against the executive decision to move Nas into the gym. The biggest reason for the opposition to Nas performing indoors is a concern over how many students will be able to attend the concert.  President of NORML/SSDP Marc Pottak says that an indoor Nas set will prevent a large number of students from attending, as opposed to a larger, more open outdoor concert.

Nas is expected to draw a large crowd.  Hailing from the neighborhood of Queensbridge, New York, Nas helped reestablish the East Coast hip hop scene’s credibility in the mid-1990s when West Coast hip hop was receiving most of the attention.  His debut 1994 album, “Illmatic,” captured what life was like in the inner city for a young, impoverished teenager, and it went on to receive critical acclaim from publications such as Rolling Stone.  Nas went on to release eight more studio albums over the course of the years, four of which charted number one on the Billboard 200, and seven of which achieving Platinum certification from the Recording Industry Association of America.

Michael Patterson, director of Student Activities and Union Services, said that due to the large amount of students expected to see Nas perform, safety would be an issue if the concert will be held outside.

“There was just a sense that there was no way we could make the event a safe event,” Patterson said.

Patterson and Pottak both gave estimates that it would cost around $10,000 to insure an event of this expected magnitude.  This charge would add to the already-high amount that it cost to book Nas: $50,000.  Other costs of Rock Against Racism such  as sound, stage, and security brings the event up to  $77,000 without the additional insurance, an amount raised by the Student Association.  The Student Association’s maximum budget is $80,000.

“The fact that he’s gonna bring a bunch of people is not because he cost so much to book, but because he’s an icon,” said Pottak.

Pottak thinks that the school wants to have Nas perform inside the gym due to financial reasons.  He disagrees with the fact that the school is charging outsiders to come to the concert because he believes that Rock Against Racism should be free for everybody.

The New Paltz Oracle stated that only 1,500 students may be able to see Nas due to Elting gym’s capacity.  However, Patterson said that the number is closer to 2,100 after being adjusted for any staff and security that must be present during the show.  Because of the stage, sound systems, and vendors such as the Red Bull tent that will be present on the quad, Patterson says he estimates that the number of students that would be able to fit in the quad will only be slightly higher.

Last year, NORML/SSDP had rapper KRS-One play during Rock Against Racism in the Old Main Quad without major incident. KRS-One is similar to Nas, as he is a critically acclaimed rapper; however, he is not as popular, and didn’t attract the large amount of students Nas is predicted to draw.

Patterson noted that KRS-One only cost $7,500 to book.  He said, “naturally the cost of an artist is going to be a predictor of how famous they are.”

Patterson said that previous concerts such as the Gym Class Heroes and the Reel Big Fish/Talib Kweli shows did not sell out, attracting around 1,000 students.

Pottak said that Nas’s camp did not have an opinion or say as to where Nas would be playing.

It appears that Nas will remain scheduled to perform in Elting Gym despite the efforts of NORML/SSDP’s petition.

Tickets are currently available at the Student Association Business Office in the Student Union room 428. The performance is free for students with a New Paltz ID.  Others who wish to obtain tickets can do so an hour before Nas’s performance at 8 p.m. for $10 each if tickets remain.

Habitat for Humanity Revived on Campus

Thu May 5 , 2011
The Habitat for Humanity Club on the SUNY New Paltz campus was revived during the fall 2010 semester. Communication among members of the original club faltered, causing Habitat for Humanity to become inactive at SUNY New Paltz.  Upon returning to school, Kevin Harvey, third-year public relations major, realized that the club had […] 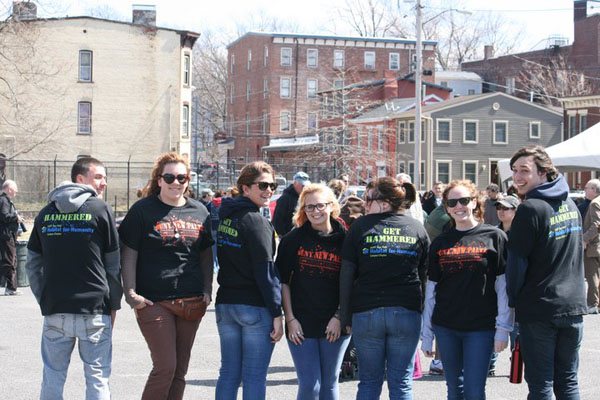