For more coverage, please see After the Rising and SUNY New Paltz One Billion Rising

It was 2:55 p.m. when 20-year-old Renee Petrillo walked into the Student Union Atrium filled with 70 cheering faculty members and students. They stood in a circle, facing the empty middle of the room.

“What’s happening?” she asked a few students who were standing by the glass doors, playing with their iPhones.

They told her about V-Day, a global movement to bring awareness to violence against women. On the holiday’s 15th anniversary, SUNY New Paltz was among several colleges in 203 countries that joined in One Billion Rising, a campaign to end violence towards women using a choreographed flash mob dance to the song, “Break The Chain,” written by Debbie Allen.

Petrillo immediately decided to stay, wondering what all the fuss was about.

At 2:58 p.m. the crowd roared with cheers when approximately 90 students and faculty members wearing red, pink and black shirts walked down the Student Union steps and into the middle of the room, awaiting instructions.

A woman wearing a black shirt yelled out, “Be quiet.” The room went silent.

The sounds of coffee machines could be heard from the nearby Seattle’s Best a few feet from the room.

Organizer Corinna Caracci welcomed the crowd, while students wrapped around the grey circular computer kiosk, awaiting their cue. They then faced the view of Route 32 through the glass walls.

The audience immediately took out their phones and video cameras, capturing every step of the routine. A few of the dancers forgot parts of the choreography, but immediately turned to Caracci, who was modeling the dance on top of the computer kiosk.

Brett Shindel was one those dancers.

“I knew half the choreography,” he admitted. “It’s okay though, I kept going anyway.”

Shindel, like many of the dancers, attended the choreography practices held at the Athletic and Wellness Center and residence halls across campus earlier that week. He practiced twice before the event.

The 21-year-old had his eyes on the instructors during the dance. The leaders were smiling and moving their bodies to the music. Three students in the crowd tried to emulate the dance but failed when the group took steps from left to right.

The dancers finished their routine by holding their pointer fingers to the sky. They then sprung into their own unique freestyle movements. Dancers ran into the crowds stealing viewers away from their friends to join in on the dancing action.

A blonde dancer grabbed a man standing by the stairs. “Dance with me,” she yelled and yanked him away from his friends and they danced in the middle of the room with other audience members.

President Donald Christian attended the event, but wasn’t up for dancing given his “bad knees.” He said he was proud of the students for standing up for such an important cause.

The crowd clapped and cheered once the music stopped. The dancers then walked away from the dance floor and left the room, continuing about their day.

Petrillo, still in the same spot as she was when she walked in, was surprised by the event. Although she didn’t know about the movement, she was glad she stayed to see the dance. “It looks like everyone was having fun,” she said. “That’s all that really counts, right?”

The fun continued on 3 Veterans Drive where the whole town rose to the occasion by dancing in the street.

Shh, We Know Your Secret! A look into the Tell-All New Paltz Secrets Facebook Page

Sat Feb 23 , 2013
According to #407, someone’s hiding a cat in Bouton Hall while #24 had sex with their RA six times. These, and many more campus confessions, can be found at New Paltz Secrets, a Facebook page created on December 20, 2012 that has found a popular, if controversial, niche among the […] 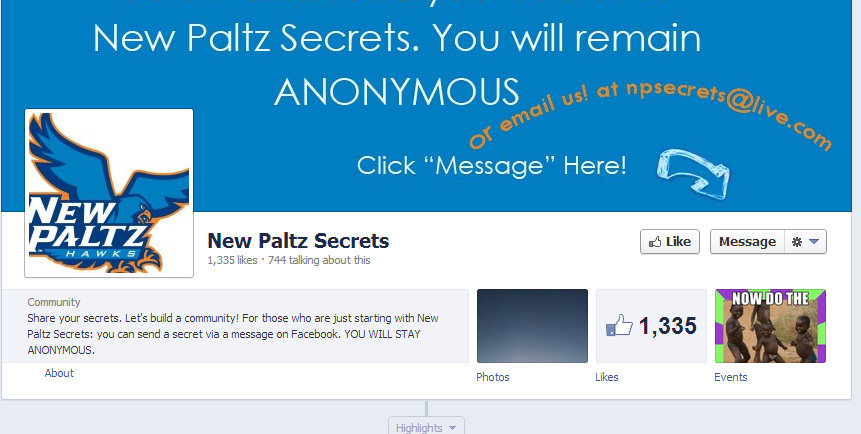