After getting off to a rocky start, Head Coach James Seward of the SUNY New Paltz Women’s Basketball team announced the team’s successful end of the 2009-10 season.

“We played the best basketball of the season the last three weeks and I couldn’t be happier,” Seward said. “We had team goals to win the SUNY Athletic Championship, get an NCAA bid and win it all, but our main goal was to improve as a team as the season progressed and we did just that.”

The Hawks had a tough month in January, winning only five of 12 games. Kristen Caban, fourth-year shooting guard, said, “That whole month was probably our lowest point as a team. We just couldn’t get it together and no matter what, we couldn’t find a way to win.”

They finished the month losing five of the last six games, but they hadn’t lost all hope.

One of the team goals was to go undefeated at home, Caban said. The Hawks finished the season going 10-3 on its home court and won its last six home games.

“It feels good to win with your home fans behind you,” Caban said.

Coming into the season, some of the players set individual goals for themselves. However, fourth-year guard Maggie Farrell said the players and coaches focused more on working together throughout the season.

“As long as we are successful as a team, my individual goals don’t matter,” she said.

Farrell led the team in points and rebounds, averaging 10.8 points per game and 5.4 rebounds a game. She also received all-conference honors along with teammate Nicole Sarcone.  Farrell’s high points of the season included two game-winning shots, one of which was in the beginning of the season against nationally ranked Tufts University.

“That was definitely a great win for us as a team,” Farrell said. “As for hitting the game-winning shot, that was just an added bonus.”

Seward has already begun to gear up his team. Second-year guard Zoe Cohen is a member of the team and is already considering ways to improve and pick up where the graduating players left off.

“I have to be a better listener,” said Cohen. “Also, the more time I spend in the gym working on my shot the better I’ll be.  Next year can’t come fast enough.”

Fri Apr 2 , 2010
Motivation is what drives the SUNY New Paltz Swim Club to continue carrying the legacy left behind by alumna Melissa Goldman. But without swim meets and competition, what keeps its members eager to return? Since Swim Club began in 2005, the noncompetitive club sport has had a solid 10 to […] 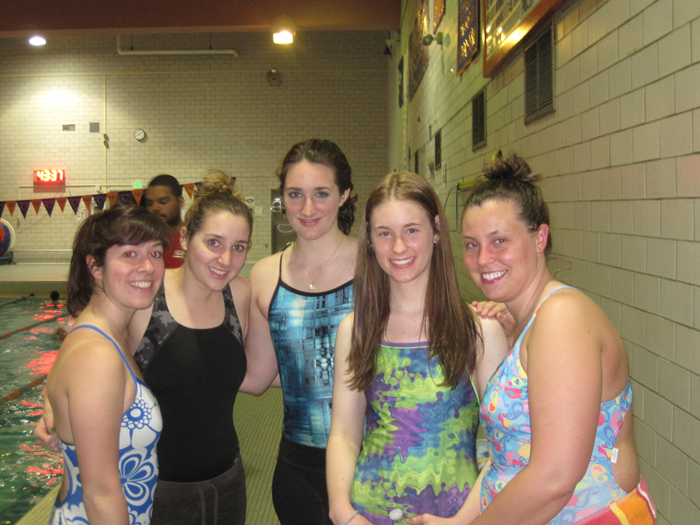