It’s almost 1 a.m. on a Friday and Mike Christianson is just waking up from a much needed nap. He hops into his ‘90s Chevy Lumina Minivan sporting a picture of a donkey with a line through it and heads into town. His mission: help people who shouldn’t be driving get home safe. His motto: don’t be a jackass.

Thursday through Saturday Christianson and his fiance Angela Siegel operate Safe Rider in New Paltz, providing reliable transportation free of charge to their patrons from 11 p.m. until well after 4 a.m.

Christianson, 35, has been driving for Safe Rider since 1994, bringing intoxicated people to their doorsteps free of charge. Mike became involved in Safe Rider because his cousin Richie died in an alcohol-related accident in 1987. Richie and his friend were racing around in his Chevy Camaro, which went over the crest of a hill, and into a tree.

“The main focus is to get people home safe,” said Christianson. “It’s to prevent people from drinking and driving or walking home and getting hit by a car. In the time since Safe Rider was created it has probably saved the lives of around 1,000 people, not to mention prevented DWIs and car crashes.”

Christianson and Siegel purchased Safe Rider about a month ago from previous owners John and Maggie Male for $56,000. Along with New Paltz, they also work in Newburgh, Marlboro, Wallkill and Walden seven days a week, making sure students and adults get home in one piece.

Because they’re not an official taxi service, Safe Rider is not allowed to take calls from anyone other than bartenders of participating establishments, or pick any person up who hails to them on the street. Because of this, they claim that they do not have to be held to the same requirements as regular services, such as taxi or livery plates, specific insurance and Class E driver licenses.

Patrons are welcomed to tip, but the money that keeps his vehicles running and his drivers paid (a meager $25 a night) comes from participating bars. The cost can be $70-$100 a week depending how many nights a bar will use Safe Rider’s services.

Some taxi services that operate in New Paltz feel that because Safe Rider is receiving payment in exchange for rides, they should still be considered a car for hire and be held to the same requirements as every other company. According to the New York State Department of Motor Vehicle’s Web site, “A passenger car used to give rides for hire must be registered as a taxi or livery.”

Joseph C. DiBlanca has been running Autos by Joseph in Highland and New Paltz for 20 years. He also owns Joey’s Taxi which has been operating for two years. He maintains his multi-faceted business by doing research and making sure he’s in compliance with the law. His drivers sport $25,000 Toyota Prius Hybrids with $40,000 insurance premiums and legal plates. His motto: We care about the environment as much as our passengers.

“I think Safe Rider is a great service, but I feel that they should be held to the standards that I am, at the minimum,” said DiBlanca.

However, Safe Rider is still running the way it always has because Christianson has a letter from 1995 which exempts Safe Rider from taxi service requirements due to its charitable cause. The letter, signed by then Director of Intermodal Operations of the New York State Department of Transportation, Paul D. Reinert, was handed to the New Paltz Police. As long as Safe Rider does not re-negotiate its contract with the bars and continues to operate the way has in the past, the letter is still viable.

When asked which service he preferred between Joey’s and Safe Rider, Brian Tanenbaum, a 24-year-old SUNY New Paltz graduate, was caught in the middle.

“They’re two different services,” he said. “You can call Joey’s anytime and they’ll pick you up from anywhere for a reasonable price. Safe Rider will only pick you up from the bar three nights a week to bring you home, but it’s free.”

At the end of the night, when it’s 4 a.m. and the bars are closed, Christianson travels to New Jersey where he drives a truck transporting organic waste, which will be turned into mulch, until 3-4 p.m. Siegel works at a sign-making company during the day.

“There won’t be a profit from this for a long time,” he said. “But it’s not all about the money, it’s about people. It’s about caring and doing the right thing.”

Trying to Close the Curtain on Iraq

Fri Mar 20 , 2009
When two planes crashed into the World Trade Center on Sept. 11, 2001, America was forever changed. America invaded Iraq and the president soon declared “Mission Accomplished.” But over five years later our troops are still there and the mission remains unfinished. No weapons of mass destruction were found, but […] 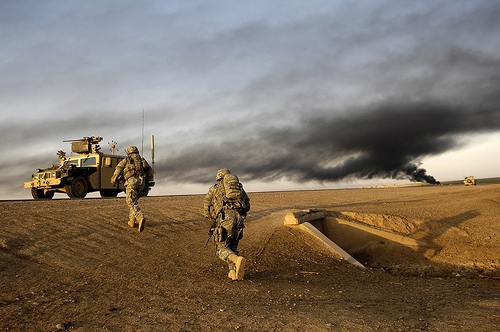