Local farms are recognized as a staple for the Hudson Valley. Since the region is often associated with the taste of freshly picked September apples and cider stands, many say that the local farms in region produce food with a flavor and richness that packaged produce simply can’t offer.

The Hudson Valley is commonly referred to as a flourishing “food hive,” and the past decade has experienced a tidal wave of interest in fresh, locally grown food. Under the homegrown influence, consumers have become increasingly attracted to putting a face and story behind their food.

While the data suggests that farms in the region are on a decline, the future of the Valley’s farms is actually quite bright. As farmers become more inclined to think creatively and diversify their marketing methods, the farming frustrations lie more in the extensive regulations rather than profit loss.
A quick walk around New Paltz can demonstrate how the local trend has impacted the green-conscious town. Many of the popular restaurants — Mudd Puddle Cafe, Kharma Road, Rock da Pasta — endorse the campaign by only purchasing local and natural ingredients from neighboring farms.

In the 2011 report released by the Glynwood Center, a nonprofit organization nestled in the town of Cold Spring and devoted to the preservation of farms in the Northeast, it is revealed there are 659,394 acres of farmland in the Hudson Valley and 3,988 farms. Out of the total land mass of the region, the farmland represents a significant 17.35 percent — a 4 percent increase in the number of farms since 2002.

After a few decades of decline, farms are again on the rise in the state of New York.

According to fourth-generation farmer Tim Dressel of Dressel Farms on Route 208 in New Paltz, the state of local farmers in today’s Hudson Valley is much less troubled than people think.

“People have misconceptions when it comes to the state of local farms,” Dressel said.

The fear for the survival of farms began in the early 1990s. Between 1987 and 1997, the Valley lost 96,000 acres of farmland as farmers sold their land for housing at a large price.

“That time in the ’90s made people think farms weren’t profitable,” Dressel said. “Honestly, my grandfather could have sold the farm and retired 10 times over during that time.”

For Pete Taliaferro, however, the prices of land due to the recession were a blessing when he bought the land for his first farm in 1995.

As a first-generation farmer, the biggest obstacle he said he faced was the expense of getting his foot in the door.
“I joke with my wife that we are land-rich and cash-poor,” Taliaferro said. “For second or third-generation farmers, the success comes from the backs of those before them but I had to build mine from the ground up.”

Over the past five years, Taliaferro said the profit has gotten better for farmers in the Valley.

Focusing his efforts on retail sale rather than wholesale, the region offers lucrative aspects that keep the farmers in progression such as unique soils, access to the city market and desirable export sales.

According to Dressel, diversification and agritourism are the saving graces for Hudson Valley farms. Whether it is apples or strawberries or fresh-grown vegetables, embracing a wide variety of products has been the reason for the survival of many farms in the region.

Where Hudson Valley farms used to thrive on one concentration, they now have adapted to a list of demands to include operations such as: pick-your-own, selling to city green markets and distributing along the East Coast. Farms such as Dressel, Apple Hill and Wilklow have embraced the diversity and expanded their businesses to include a pick-your-own option.

Some farmers have even gone as far as to become certified in manufacturing alcohol through Governor Cuomo’s Farm Brewery License. Since the legislation’s approval in 2011, the number of New York’s farm-based beverage licenses for distilleries, wineries, breweries and cideries has risen 72 percent. This number not only provides a significant boost for the agricultural industry, but attracts tourism to the region.

Dressel says that after a 15-month process, he received his N.Y. State cidery license, using the farms famous apples for year-round hard Kettleborough ciders. Though he keeps this separate from the farm’s business, he predicts the revenue gained from the cider will help keep the apple farm’s profits up.

The backbreaking profession, however, comes with its fair share of frustrations.

According to the same Glynwood report, the past decade has seen a 25 percent increase in production costs for farmers with a subsequent two-thirds of the Valley’s farmers reporting a loss in profit since 2002. Dressel argues there is a lot of “unnecessary fear mongering in regard to farming” and the frustrations lie in the increase of regulations rather than a decline in profits.

With a diversified system of marketing, Dressel says the farm is subject to stricter regulations including: inspections, increased labor costs and training guidelines.

“Federal regulation and labor costs have been a big problem,” Dressel said. “They’ve been around forever, but seem magnified now.”

When his grandfather took over the farm in the late ‘50s, Dressel said “the concept of regulating farm conduct was unheard of.” But by opening themselves up to distributors and expanding their sales beyond the Valley, farms have become semi-commercialized and ultimately subjected to greater regulations.

“It’s a growing pain for farms,” Dressel said. As expansion for smaller-scale farms hoping to thrive is inevitable, Dressel says there is no way around the extra expenses and time.

With any bureaucratic plan, there comes a cut in profits and extra expenses. For smaller farms such as Taliaferro, the greatest expenses derive from the fuel prices, workers compensation and seeds.

And for the local farmers, their busiest seasons mean no down time. Taliaferro says creating a windfall in the business is rare and an increase in growth sales often does not lead to a greater profit for the farmers.

Despite the wavering data, Taliaferro says there is reason to be hopeful for the Hudson Valley farming and the future will see a continued strength in its agriculture.

“We have been really lucky,” Dressel said. “During September, we usually have more customers than we can deal with.”

Thu Apr 17 , 2014
Michelle Walsh, owner of the Mudd Puddle Cafe, got into her car in a panic and headed over to the Rite Aid on Main Street one Friday morning to purchase a pay-back money card for the coffee shop’s electric bill. Little did she know, she was about to fall […] 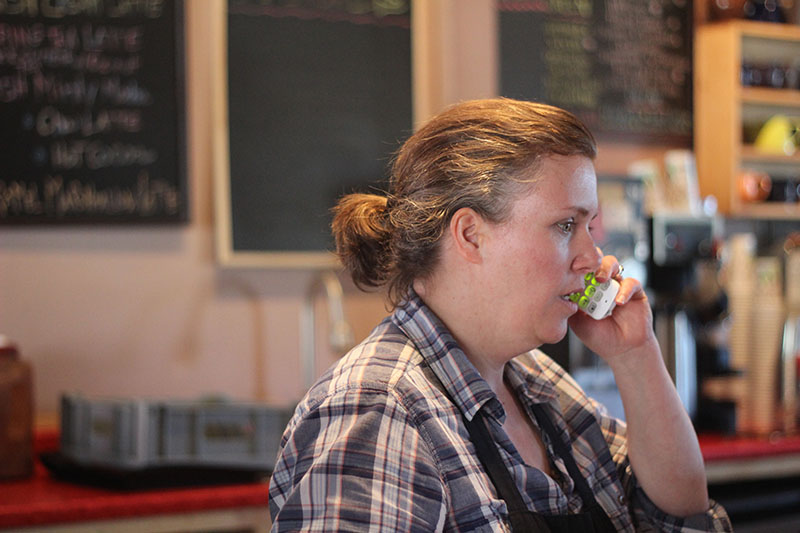