It’s a world where you can perform magic spells, fight dragons and create potions. Mingle with humans, elves, Halflings, dwarves and Orcs, while preparing for battles.

No, it isn’t Harry Potter or Lord of the Rings.

“It’s basically improv acting that meets character building,” according to Lauren Coluccio, president and gamemaster of New Paltz LARP. “It is a way for me to allow creative diversity within character building.”

Contrary to popular belief, LARPing is not just for Dungeon and Dragon ‘nerds.’ Here at SUNY New Paltz, students don’t LARP as a form of escape because it’s just a game that is intricate but imaginative.

“We aren’t super, super into it like the predisposed notion of LARPers,” said Coluccio. “People don’t wear a cape 24/7 while picturing themselves in a fantasy land.”

Coluccio, a fourth-year Spanish major, formed New Paltz LARP at the beginning of the 2009 fall semester. As gamemaster, Coluccio is the organizer, arbitrator, and moderator for New Paltz LARP. She is the mastermind behind the fantasy-stricken stories and developing plotlines that she writes up herself.

“Coming up with a LARP plot is like coming up with a lesson plan,” said Coluccio. “It’s difficult to start, the way a paper is hard to come up with, but once you get started, it’s easier for details to take shape.”

Coluccio’s character, elf Ch’taia (pronounced CHA – TA YA,) leads the ‘Crusaders of the Crown,’ to fight for their King. LARPers are given a set of rules for character building and follow the “Kingdom of Kasinthia Handbook,” a guide written by Coluccio that outlines all the kingdoms, races, religions, NPC’s (non-player characters,) technicalities and magic.  As the game progresses, it becomes an incessantly-developing story.

“Depending on the day, after the usual solid ten people sign in, there is usually a beast that infiltrated the kingdom that we would have to go slay,” said Coluccio. “Or it could be an assassin that enters the royal palace that we’d have to fight off.”

In terms of territory, campus becomes their kingdom, Kasinthia. The Engineering building becomes the Academy of Magic, the library becomes the Royal Palace of King Aldo, the SUB becomes the Union of Races and Bliss Hall becomes the local whorehouse.

What sets apart their kingdom from the 15 official recognized kingdoms is that they are composed of mixed-raced citizens that either grew up in Kasinthia or emigrated from other places, similar to the United States, according to Coluccio.

“It almost feels like a play that is unscripted,” said Lamonica. “I like being in character, a paradigm shifting that is fun to think in that stance that I normally wouldn’t.”

Weapons called boffers are also a huge deal within LARP-ing. In the detailed and lengthy handbook, these weapons have to follow safety regulations. They are to be made completely of PVC pipe, foam, and duct tape. Lamonica reveals that even if the weapons are soft, if hit really hard, it can actually hurt.

“I threw up once after a battle while being a dragon which is a NPC (non playable character),” said Lamonica. “As I was falling, they were all wailing on me and on top of the exhaustion, I got hit in the head pretty hard.”

Weapons aside, costumes aren’t emphasized within LARPing here at New Paltz. According to Vice President of New Paltz LARP, Melissa Thorsen, who goes by the nick name Betty, people have a preconceived thought that costumes are mandatory when they are just simply encouraged. They do not have to be lush velvet capes, just earth-toned clothing that has a mere similar resemblance to ‘Lord of the Rings’.

“Because of budget reasons, its usually tough for people to always be in costume,” said Thorsen. “We don’t want people to spend $300 on a costume when we definitely don’t need it.”

Coluccio and Thorsen recall one of the battles taking place on the Quad, where one half of the Quad was HvZ (Human vs. Zombies, an extreme version of tag) and the other half was LARPers.

“There was a crazy amount of people, 40 human and zombies on one side of the Quad and 15 of us LARPers battling on the other side,” said Coluccio. “All of a sudden, so many students were videotaping and taking pictures of what was going on.”

“It’s officially the nerdiest the Quad has ever been,” said Thorsen.

Coluccio believes that many may be intimidated from joining because they have never done it before, they might not have a costume or weapons, or they’re afraid to act out their characters. Magic and battle royale aside, it really is all about just giving it a chance, learning as you go.

“If we can get up to twenty people in LARP, that’s still ten against ten so when we train or battle, it would be a lot more fulfilling,” said Coluccio. “The more people there are, the more inclined you will be to chime in, making it easier to role play.”

For just an hour and a half a week, LARPers are in the kingdom of Kasinthia, an alternate reality, a fantasyland. It is more than just playing pretend for adults, it’s a mix of creativity, improv and adventure.

“People really get into it,” said Lamonica. “It’s creative, engaging and fun. It’s totally worth it as long as there is no internal bleeding.”

Inspiring Experiences of a Journalist

Sun Feb 20 , 2011
In the days of Twitter and Facebook, media consumers are becoming media producers and professional journalists are finding themselves scooped by citizen journalists. So saysJohn Larson, a veteran broadcast journalist and SUNY New Paltz’s 10th James H. Ottaway Sr. Professor of Journalism, in an interview with Interim President Donald P. […] 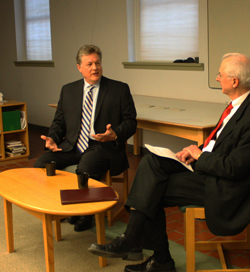