On Thursday, Jan. 29 a sprinkler line burst in Coykendall Science Building, causing water to rush down from the ceiling in the foyer at the west entrance of the building and out the doors.

There was “minimal damage that was done to the sheetrock in the foyer space. Also, no other damages occurred throughout the building,” said Gary Buckman, director of Facilities Operations and Maintenance.

The cause of the pipe burst was a sprinkler line that had become damaged due to the combination of the recent drop in temperatures and cold air hitting the pipes. Facilities crew members responded by securing the entrance, insulating the line and quickly salting the stairs to keep the water from freezing. No classes were cancelled during the time of the incident, however, students were directed to use an alternate entrance to the building.

Tue Feb 17 , 2015
By Alex Prawdzik Students and faculty were introduced to the 2015 James H. Ottaway Sr. Visiting Professorship, Alissa Quart, during a question and answer talk with President Donald P. Christian.  Alissa shared her insight about journalism and the use of media while also discussing highlights from her career, which includes being […] 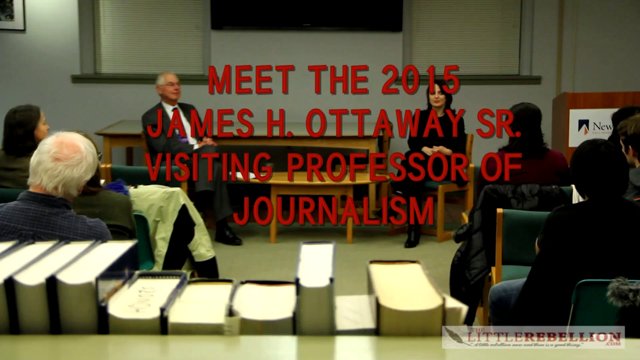