The development of the $56 million residential complex Park Point New Paltz has been at a standstill since June 2014 due to two lawsuits: Rochester, New York-based real estate and management company Wilmorite Management Group, LLC is suing the Town of New Paltz for its planning board’s denial of site plans. The New Paltz Town Board is suing the Ulster County Industrial Development Agency for implementing a Payment in Lieu of Taxes (PILOT). Relations between SUNY New Paltz and the Town of New Paltz are currently sour. 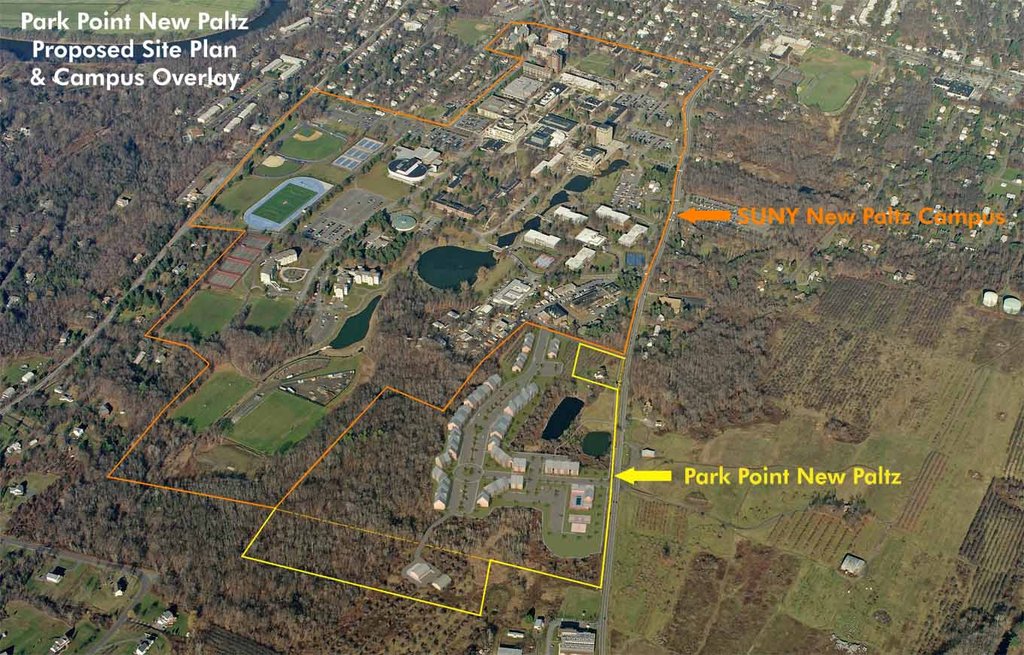 Park Point, the 732-bed, 13-building private development proposed for a 50-acre parcel of land next to campus on Route 32 South, has polarized the community. Proponents say it will provide much-needed housing to alleviate the crunch on and off campus. Much of the opposition to it revolves around the 25-year tax break approved by the county. The outcomes of the lawsuits will determine whether the development will be built. Park Point would close the gap between SUNY New Paltz and other SUNY schools in the amount of housing that can be provided to students. There is a 14 percent lag, currently leaving SUNY New Paltz short of 920 beds to accommodate students, Christian said.

Local town board members are not in opposition to the private development, but are strongly opposed to the PILOT. Park Point has been approved for the category 5 PILOT issued by the Ulster County Industrial Development Agency (UCIDA), granting Wilmorite a tax break of an estimated $20.2 million over a 25-year period of the agreement, which has town board members furious and SUNY New Paltz administrators on the defensive.

Under the PILOT agreement, Wilmorite will pay $552,000 per year in town, county and school taxes on 696 units of student housing. The 30 faculty housing units would pay the full assessment established by the town assessor. Town officials have always asserted that Park Point should pay full taxes, which amount to an estimated $1.2 million per year. But Wilmorite and college officials argue that even with the PILOT, Park Point would be paying much more in taxes per unit than the average apartment in town.

According to the New Paltz town assessor’s office, a comparison of the property tax assessment of existing apartment communities in New Paltz to that of Park Point, with and without the PILOT, reveals a big gap.

“Park Point should not have to pay a considerable amount of taxes in comparison to other housing complexes in town,” Christian asserted. But Town Board Supervisor Susan Zimet disagrees. “Park Point is building the project, is getting all the profit for the project, all the tax breaks for it, and isn’t paying any of the taxes…leaving the residents to pick up all the costs for the extra police, fire department and rescue,” she said. “You’re asking the town taxpayers who are already overburdened to pick up taxes to pay services for a private developer who is going to reap all the profit: Not fair.”

As for student representatives, attitudes towards the development of Park Point are varied.

Manuel Tejeda, former president of SUNY New Paltz Student Association (SA) from 2013-2014 and current senator, said the student body is not in favor of Park Point if the PILOT is in effect. According to Tejeda, after SA evaluated the project and understood the environmental impact, and how it would affect the town in regards to commercialization and traffic concerns, they were on board, but because of the implementation of the PILOT and concerns from town board members, SA withdrew its support. “We were in support of Park Point, but only if it paid its share of taxes and abided by the conditions presented by the town. It has been a long time coming leading up to the development of Park Point, and these issues needed to be addressed,” Tejeda said. President Christian does not anticipate a resolution soon. Thomas Daniels, Wilmorite’s attorney in the case, said the lawsuit between Wilmorite and the Town of New Paltz Planning Board has not been dealt with in the courts and is awaiting a decision by the appointed judge, Michael Melkonian, acting justice of the New York Supreme Court 3rd Judicial District from Rensselaer County.

Regarding the lawsuit between the Town of New Paltz and the Ulster County IDA, the case is at a temporary halt and Wilmorite has not responded to the case pleadings. Both are being handled in Ulster County Supreme Court. Park Point will remain in the hands of the attorneys and courts until either a settlement or a decision can be reached.

The Park Point project is a proposed residential development on the SUNY New Paltz campus. Currently in development with private company Wilmorite, the complex is inteded to provide housing for 700 students and approximately 30 faculty and staff members, according to SUNY New Paltz officials. The project would be built on 50 acres of land owned by the university that is located near the south entrance of campus and is adjacent to the University Police Department. February 2014 update: In the hands of the Industrial Development Agency.


New Paltz Village Mayor Jason West attended the Nov. 19 Town of New Paltz Public Hearing and said he was not in support of the Park Point project due to tax exemptions.

Vice President of Student Affairs Ray Schwarz said the top priority of college administrators is to ensure the safetey of their students.

Check out the coverage by The New Paltz Oracle  regarding the public hearings, actions taken by campus officials and more.

The Park Point New Paltz website is also up and running, providing information on site plans, renderings and additional documents.