What is A24, by definition? According to Variety, they’re a “distribution, financing and production company” named after an Italian highway. But ask film enthusiasts this same question and you get a completely different answer.

“They’re not trying to be for everyone,” says 25-year-old SUNY New Paltz graduate Dan Ducey. “I genuinely never know where it’s going or how weird the story’s going to get.”

“They produce movies that are about topics we need to address as a society,” is 26-year-old SUNY Ulster graduate Jean Pierre-Blandon’s take.

“They have a certain quality about them,” said 20-year-old Bard College student Lena Hono. “It’s almost indescribable. Their plotlines aren’t necessarily about a situation people can immediately relate to, but they ultimately earn the viewer’s sympathy.”

Cool indeed. What do all of these A24 fans have in common? They’re young, and A24 has certainly cemented its place as a young, fresh faced and feisty company willing to go places the big studios won’t. It’s quite rare that the name of a studio becomes an adjective. You don’t hear, “that movie had such a Warner Bros. feel to it,” or “your outfit has such Paramount Pictures vibes!” But it’s quite often that young people, film fans or not, use A24 in that exact sense.

A24 is only eight years old, having been unveiled in 2012. It was created by John Hodges, Daniel Katz and David Fenkel. All three had quite a bit of experience in the film world before this venture. This doesn’t mean the dismount was flawless, however. As Katz told GQ, “None of us really knew what we were doing.”

Rather than go into the nitty gritty of the business of A24, it’s important to go into what makes their movies unique. They truly have a movie for every taste, and no two movies are the same.

A24’s horror films are a particularly hot topic of conversation in the film world. Yet they have to compete with the Blumhouse studio, which exclusively produces horror films.

However, A24 once again takes the cake in terms of a following. “Blumhouse” is hardly synonymous with a specific aesthetic. Robert Eggers and Ari Aster are two of A24’s most beloved horror directors. According to Screenrant, Aster’s debut feature film “Hereditary” made “$79 million worldwide on a budget of $9 million.” An indie movie to be certain, but no less financially successful for it.

“‘Hereditary’ was the first movie that really showed that horror can be an in-depth analysis of generational trauma while keeping it in a fresh presentation,” said Pierre-Blandon on his favorite A24 flick. “Some people don’t even call it a horror movie, but I disagree.”

“I’m not saying A24 invented arthouse horror,” writes Hoai-Tran Bui for Slashfilm, “But A24 is tapping into something – and it’s a move away from the jump scares we often see at the multiplex.”

And therein lies one of the many beauties of A24; their movies tend to flout genre. “The Death of Dick Long,” directed by Daniel Scheinert, is a comedy. However, as Ducey said, “it scratches all the comedy itches while simultaneously luring me in with mystery and drama.”

A24 is also popular amongst young people for their merchandise and marketing strategies. Their entire aesthetic is cool and aloof. It’s ironic how much effort it takes to appear that effortless, but they have it down to a science.

One notable marketing campaign was for “Ex Machina” in 2014, written and directed by Alex Garland. The marketing team created a fake tinder account to promote the movie and landed A24 in some hot water for using a photo of actress Alicia Vikander. “Tinder was yelling at us,” cofounder Fenkel told GQ. “They kept shutting us down.” Those kinds of offbeat risk taking actions earn A24 their spot as a spunky new studio.

In terms of their merchandise, A24 might be construed as overpriced. But one could argue that overpriced translates to more desirable in some cases, and A24’s merch shop has been making film students broke since it launched. But for those who aren’t necessarily willing to spend $50 on a snapback hat, the shop also offers free posters that anyone can print out.

A24 doesn’t just do movies. They’re also behind some TV shows such as “Ramy” and “At Home with Amy Sedaris.” The former in particular is well loved and was nominated for three Emmys this year.

Just because A24 is an indie name doesn’t mean their projects aren’t critically acclaimed.

“Moonlight,” written and directed by Barry Jenkins, won Best Picture at the Academy Awards in 2016. That film is beloved by both A24 fans and respected critics alike. “The movie walks a perfect line,” says Warren, “of art film and popular release.” He recalls seeing “Moonlight” in a packed theatre. “What a magical way to experience what was one of the greatest movies of the decade.”

Blandon uses “Moonlight” as an example of the studio “allowing creators to make movies about the LGBQ POC (person of color) experience. When else was a movie about a gay Black kid done? It’s movies like that we need to see.”

A24 films will continue to retain that magic during quarantine. Their most anticipated new horror flick, “Saint Maud,” has yet to be released in the states. The future of A24 is anything but uncertain, however. Their loyal fans will stick with them, COVID and all.

“I worked for David Laub, who works on acquisitions for A24,” Warren said. “He showed us ‘First Cow’ right before spring break. He said all of Kelly Reichardt’s movies capped off at $1 million and A24 was trying to push past that. He told us to watch the numbers over break.”

Not quite. “First Cow” has already gathered four Gotham Awards nominations. Even a pandemic can’t take A24 down.

Gillian Hamilton explores the benefits and stipulations that come alongside tiny home living through a Q&A with researcher Dr. Maria Saxon.

Jessica Barr dives into the dangers of cyberstalking and how to handle it.

Taylor Dowd provides insight on hunger relief organizations in New Paltz and Ulster and how they’re managing during the pandemic.

Emma Cariello is a senior at SUNY New Paltz majoring in journalism with a double minor in film and creative writing. Her short stories have been published in three online publications and one anthology.

6 thoughts on “A24: How A Young Film Studio Attracts Young Movie Buffs”

Industry Group Seeks To Save Venues Hit Hard By Pandemic

Fri Dec 4 , 2020
The National Independent Venues Association is trying to build support as concert halls that lack federal funding are on the brink of closing. Edited by Nick Califra Picture this—you’re sitting in a padded seat in the middle of a theater, silent except for the sound of people around you flipping […] 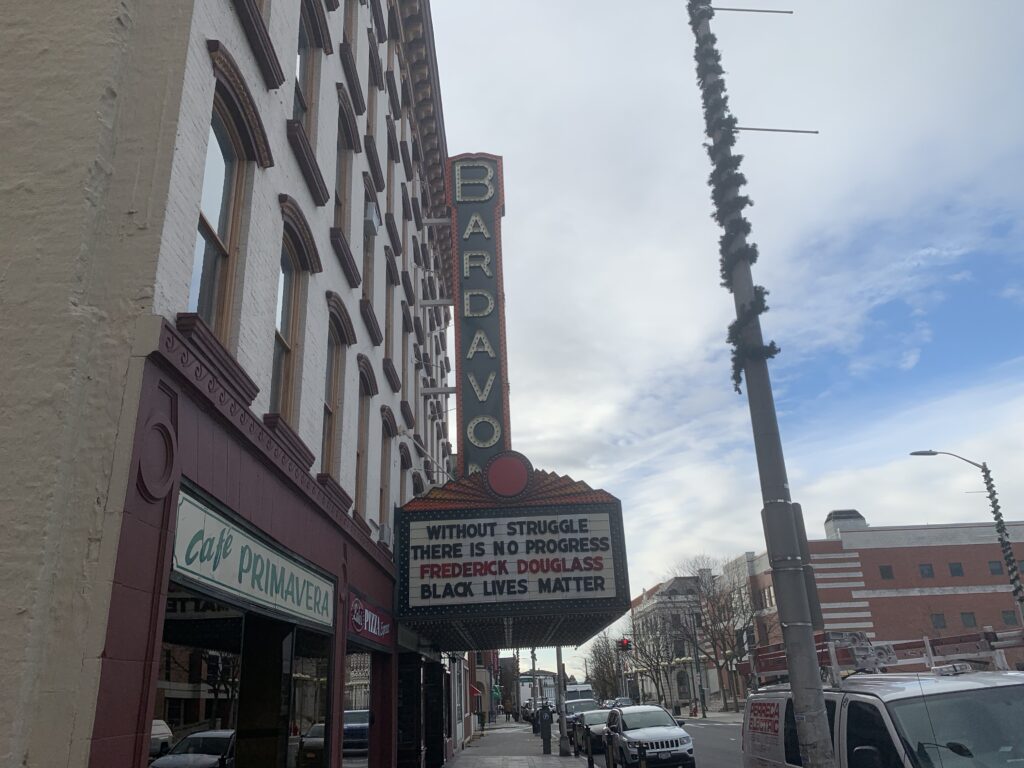