Republished with permission from the Legislative Gazette.

Among the numerous issues faced this year, the unjust treatment of people who are Black and Black indigenous people of color (BIPOC) by law enforcement has been heavily discussed. While demands for police reform have spanned decades, this year has resulted in Americans being more fired up than ever to use their right to vote in order for their needs and wants to be heard. America has become divided on the proposal of defunding the police; the upcoming election will determine the management of police in our communities and the treatment of targeted groups moving forward.

Queens is the largest geographic borough in New York City and maintains a relatively large economy due to major industries such as construction, transportation and retail trade. Urban and rural areas are sprinkled throughout the borough.

In January 2020 Melinda Katz became the District Attorney for Queens County, opening up the seat for Queens Borough President (QBP); City Councilman Donovan Richards (D) and Joann Ariola (R) have deemed themselves fit for the job. Their campaigns actually share a lot of similarities; they both agree on better transportation, better jobs and affordable housing and supporting small businesses.

Ariola and Richards hold different viewpoints on the prison occupying Rikers Island; this seems to be their most divisive issue. Both candidates failed to respond to a request to be interviewed in regard to their campaigns.

Richards has resided between Southeast Queens and the Rockaways for the majority of his life. Since 2013, he has served as the representative for District 31 on the New York City Council. A longtime advocate for criminal justice reform, Richards is the chair of various New York City council committees including the Committee on Public Safety.

Ariola currently resides in Howard Beach, Queens, and is a wife, mother, grandmother and healthcare worker. She has previously worked at the Queens District Attorney’s Office, Queens Criminal Court, and the NYC Council as both the chief of staff and press secretary for Queens and Brooklyn. Despite the current negative consensus regarding police officers, Ariola has been extremely vocal in supporting them.

There are 1,184,884 active voters in Queens: 766,213 Democrats, 126,670 Republicans and 253,716 voters not affiliated with a political party. In the previous QBP General Election, Democrat Katz received the majority of the votes, with the Republican runner-up William Kregler receiving only a fraction. The democratic leaning ideology in Queens has been showcased in recent months when residents took to the streets to protest the racially motivated injustices members of the Black community and POC in general have faced.

Ariola’s campaign is seeking to maintain the prison on Rikers Island. She has been adamantly supportive of the New York Police Department as they continue to be scrutinized for their nefarious actions these past months. On Oct.7, 2020 Ariola posted to her Instagram account criticizing the “defund the police” narrative, saying that doing so is dangerous because it will increase crime. According to a Facebook post made on Oct. 8, 2020, she believes that establishing new prisons in our neighborhoods will be too costly and bring crimes closer to our communities. Her plan is to work with both the NYPD and the Queens population to establish an environment where people can feel safe going about their daily lives.

Richards, on the other hand, is in favor of closing down the prison on Rikers Island. In an article he wrote for the Queens Daily Eagle, Richards offers a first-hand experience of losing his childhood friend to gun violence and wants to construct a new police precinct in Southeast Queens in a bid to make the streets of Queens safer. Richards believes that since it costs more than $200,000 a year to confine only one inmate at Rikers Island, it will be more cost-efficient to shut it down.

Richards’ campaign highlights how Rikers Island is a perpetrator of systemic racism, as Black and Brown people are more likely to be caught up in the cycle of being released only to be reincarcerated due to lack of resources and support following their release. Richards says this cycle occurs because Rikers fails in rehabilitating or providing vocational training to inmates during their time in prison, leaving the released to resort to the crooked actions that caused them to be convicted in the first place. He wants to invest in inmates and provide them the opportunity to flourish once they are released, which in turn will benefit their communities.

When comparing Ariola’s and Richards’ platforms on Rikers Island, Richards seems to be more in tune with what the majority of people have been vocalizing these past months. Queens being a Democratic borough is another component that works in favor of Richards. The outcome for QBP seems to be predictable. However, this year has been full of unpredictable events—at this point, anything’s game.

Mon Nov 2 , 2020
Reposted with permission from The Legislative Gazette. For the third time, Heather Collins is running under the Republican ticket with the Conservative party in Assembly District 1 against the incumbent Fred Thiele who is affiliated with the Independence Party.  The district has a majority of Democratic voters who have elected […] 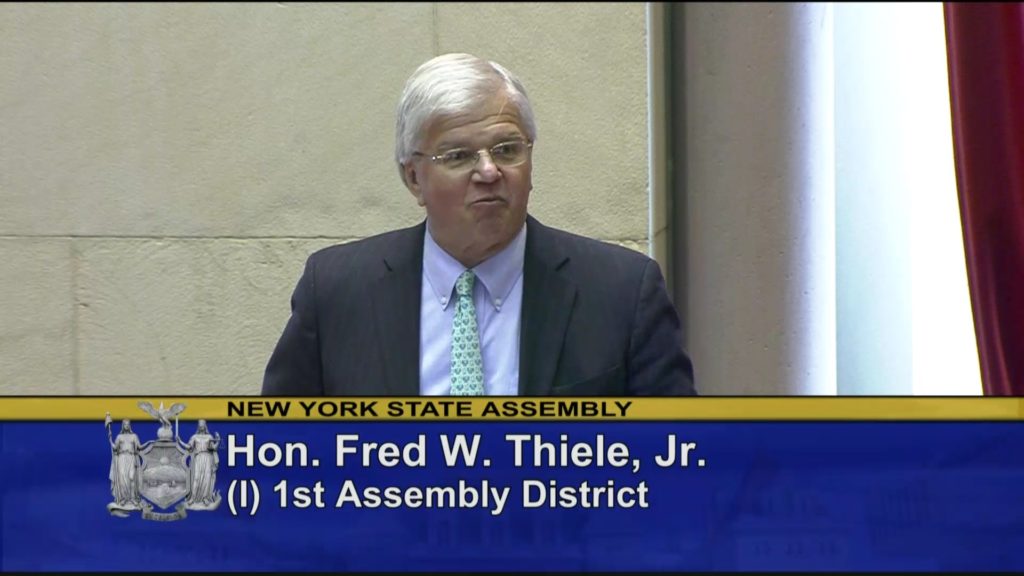