“I’ve never seen a line to get into Snugs” was a sentiment that was echoed by many who passed by the unusually busy dive bar. While the bar was fairly popular amongst locals and students, there was a clear reason that there was a huge turnout tonight: a drag show.

The drag show featured performances by members of the Haus of Peculiar, a New Paltz based troupe. In addition to performing in New Paltz, they perform across the Hudson Valley in places like Kingston and Poughkeepsie as well. The matriarch, the queen who founded the Haus of Peculiar is Victoria Indigo Precise. The haus was formally founded about a year ago.

While in the past, drag has been perceived as a niche artform within the LGBTQ+ community, there is no denying that it has creeped into the mainstream these past couple of years. “Ru Paul’s Drag Race” is currently airing its 12th season on VH1, boasting a number of celebrity guest judges including rapper Nicki Minaj, actress Whoopi Goldberg and Congresswoman Alexandria Ocasio-Cortez. “Ru Paul’s Drag Race UK” just recently aired its first season, and the fifth season of “Ru Paul’s Drag Race All Stars” is set to air in the summer of this year.

If you live under a rock and haven’t heard of Drag Race, you have almost certainly seen drag queens in popular media. In the critically acclaimed 2018 film “A Star is Born,” one of the first

scenes takes place in a drag bar, and stars one of the most successful Drag Race alums, Shangela. Queens have been featured in music videos of many pop superstars including Taylor Swift’s “You Need to Calm Down” and Lady Gaga’s “Applause” lyric video.

“Phi Phi O’Hara asked me if I was a drag queen at an event I was hosting for my school, and I told her no. She then looked at me and said, ‘I think you’d be amazing at it and you should give it a try.’ So I did,” says Figueira.

The Haus of Peculiar isn’t the only outlet for drag performers in New Paltz. Former New Paltz student Julian Naing performs drag under the name Beverly Quick, and with the help of a close friend, established an off campus drag show called the Quick Show.

“One of my best friends and another New Paltz alum, the drag queen Virgo Couture, wanted to throw an off campus drag show. So with my background in creating on campus drag shows, I helped her out and we started the Quick Show. It was mainly her dream to have a show for cisgender women to perform in drag, becasue the mainstream queens, my mother and their friends, had formed a tight gay ‘elite’ who usually book their friends for their shows,” says Naing.

Like Figueira, Naing was also exposed to drag via “Ru Paul’s Drag Race”. Due to its femininity, Naring wasn’t sure about doing drag at first. However, after being “adopted” by three drag queens who ran the drag club on campus, that changed.

“I learned how to apply makeup, how to perform and dance for others, and how to be able to create art that I imagined, with resourcefulness and confidence. My transition into drag meant creating the Beverly Quick, and always feeling a need to perform. It also meant letting go of internalized hate of my own identity and its rituals that embrace femininity and gender defiance. In doing so, I found strength in performing and understanding myself,” says Naing.

“You can see a sense of family and love for each other on this scene as well. The drag scene is just one big, happy, dysfunctional family filled with all types of people! It’s truly a beautiful thing to witness.”

Drag Race predominantly features cisgendered men dressing up and performing as women. A lot of criticism comes from the fact that outside of mainstream drag, there are much more diverse group performers out there.

The Haus of Peculiar prides itself in featuring the most diverse group of drag performers you can find in the Hudson Valley.

“Much like anything in this world, Drag Race is not perfect and it can absolutely be better, but for the most part I enjoy the show very much still. No matter how I feel about the show it has most definitely changed the world of drag and if it wasn’t around I don’t think I would have ever become a drag artist,” says Figueira.

If you want to catch some of these performers in New Paltz, the Haus of Peculiar hosts a Ru Paul’s Drag Race viewing party every Friday at McFoxlins, with doors opening at 7:30 p.m. The Quick Shows are continued by the drag club on campus, The Kings and Queens of New Paltz.

“We have a bit of everything here, and you can see many different forms of drag, it’s wonderful!” says Figuera. “You can see a sense of family and love for each other on this scene as well. The drag scene is just one big, happy, dysfunctional family filled with all types of people! It’s truly a beautiful thing to witness.”

Lara Morales is a fourth-year journalism and media management major. She is from Queens, New York. In her free time, she enjoys playing video games and listening to music.

Tue Mar 24 , 2020
By: Jared LaBrecque Ratlung Worm appeared imposing when he took to the carpet stage in the basement of the New Paltz “DIY” venue, Sanctum House, on Feb. 20— baggy camouflage pants, large Timberland boots and a thick tan jacket, all rounded off with long, flowing blond hair. He launched into […] 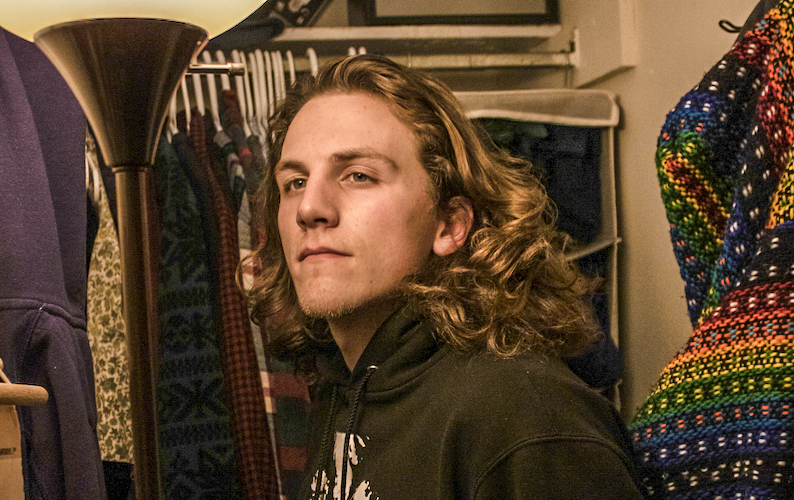