As many people are probably aware, the New Paltz region is home to some gorgeous mountain ranges. What they may not know is that these ranges attract a lot of avid rock climbers from around the globe. One such climber was so drawn to New Paltz and its climbing that he ended up planting his flag here and started a business. Hidden behind the Walgreens on Main St. is BC’s Climbing Gym, owned and operated by 37-year-old Christopher Scott. Scott is a two decades long veteran of climbing and has traveled the U.S. climbing and working at climbing locations indoors and outdoors. Climbing gyms have been expanding all across the Western world, with a consistent growth of 7-10% a year in the U.S. and 10-15% a year in Europe. Indoor climbing will also make its first appearance on the world stage in the upcoming 2020 Olympics. I took the opportunity to ask Scott some questions about himself, his gym, rock climbing and New Paltz.

How long has this gym been a part of New Paltz?

Well, that answer is a two-parter. The space originally opened as a climbing gym in 1994. It’s actually one of the oldest climbing gyms in the country. Back then it had a very different branding and model than it has now. It’s been my place for the past two years. It’s evolved quite a bit. I did a complete rebranding to turn the place into a more modern bouldering gym with modern (climbing) movement. I spent a bunch on new foam mattresses and new sexy climbing holds, which were both ludicrously expensive. I also got rid of most of the kids’ programming. I wanted to focus on adult climbers. The old place was more a Boy Scouts or after school programming kind of vibe. The weekends are still for families, but we have a rule where after 5 p.m. we are 13 and up only.

When did you start rock climbing?

I started when I was about 15 years old, so I’ve been doing this for 22 years now. I got into climbing during high school after a buddy’s dad introduced me to it. He had what we in the climbing world call a “woody,” or a small climbing wall, in a garage or behind their house. Back then I was living in the Thousand Islands area upstate, so the closest rock climbing gym was in Canada.

Do you still climb nowadays, outside of testing the routes in the gym?

In many ways for me, climbing is like a marriage: sometimes it’s hot and heavy, and sometimes I need a break and I’m sleeping on the couch. But I’ve been climbing for so long that I know what good movement feels like, and that’s what I focus on while making the paths. Every 6 weeks the entire gym is essentially a different place with new paths that have a spectrum of difficulties. I always run through the paths to make sure they’re safe for people of all sizes. Outside of that, I don’t have as much free time as you might think.

What separates BC’s from conventional gyms?

I think there are a lot of gyms out there that are in it to make money. I call some of these places the “Wal-Mart” of exercise or outdoor activities. We’re more of an indie place. This is a gym not owned by a businessman or an investor, but an actual rock climber who has been in it for a long time. A lot of other places don’t spend money on the things that are correct. The thing we spend money on is route setting and lots of it. We want new routes all the time. That’s what we really sell: climbing movement. Putting people on the best holds and giving them climbing movement that never gets stale. I would also say that you get an even better workout here. Here you get a mental and a physical workout at the same time. We always try and keep it fun and jovial here because we want the place to have character; a soul.

Why the focus on bouldering (climbing alone without any ropes or harness?)

Part of the reason is obviously the size of this space. Our ceiling isn’t very high so that limits us somewhat. The other part is that top-rope climbing [climbing while roped to a pulley and another person] can often be very time consuming. You have to get into your harness, learn how to belay properly so you don’t drop someone, and even find a partner in the first place. With bouldering, you can just hop right on and start climbing. Technology, in this case the new foam mattresses, also allow people to climb higher than they used to while still being safe. Bouldering also allows maybe eight to ten people to climb an 8 foot section of wall compared to two people who are belaying.

What made you decide to start this business in New Paltz?

Well I moved around a lot after I graduated high school. When I came to New Paltz in 2002, I was actually living in a camping area for four months before I got my first apartment. I had somehow gotten into SUNY New Paltz, which wasn’t easy to do. I wanted to be in a place where I could learn and climb at the same time. New Paltz has the Shawangunk mountain range, us climbers call it the “Gunks,” in it’s backyard so it quickly felt like home to me. After I graduated, I sort of travelled around climbing. I’ve lived and climbed in California, Texas, Colorado, Florida, and multiple places in New York. Over the course of two decades I worked at 27 different climbing gyms, often as a path setter. I lived in the deserts of Texas for a while guiding people through climbs in Hueco Tanks State Park. After living in NYC for four years working for the most profitable climbing gym in the country, I felt the need to move upstate again. I don’t want to poo-poo on the previous owner but, when this gym came up for sale I felt the previous owner hadn’t run it at a level the community deserved. So I decided to take it over and make it the best and coolest it could possibly be, and it seems the community has really bought in.

What makes your gym one of the more underground parts of New Paltz ?

You mean outside of hiding out in the back of a Walgreens parking lot? Well in some ways the invisibility that brings is kind of cool. It’s also worrisome for me if suddenly 80 people are in here. I get diminishing returns after a certain point and some people won’t want to come if it’s always full. It’s already almost at that point now. But we’re all about building community here. That’s one of the things BC stands for: Building Community. Some people also call me Big Chris, since I’m pretty tall, which is another BC. We do bouldering competitions, have better climbing, and host bouldering clinics. There’s a lot of different things that BC stands for. The Gunks is also one of the most climbed spots in the world, so people who are in the know about that often come here to train and prepare.

What are some of your favorite parts of owning this business?

It’s really dope to watch people progress and get better. They try new things and slowly figure out how to really rock climb. It’s also really great to feel like the people in the community want to see this place be successful. People have told me that I really filled a void in New Paltz. That’s definitely one of the best feelings.

Takura Sophia-Blaise (he/him) is a senior at SUNY New Paltz majoring in journalism and minoring in communications. His mother was born in Germany, his father was born in Haiti, and they met going to Columbia in Queens. Being of mixed heritage inspired him to learn as much about the world as possible.

Wed Mar 11 , 2020
By Abigail Foster In a dark room, two figures are illuminated: One is wearing a white dress shirt, a clip fastened to his crimson and black striped tie, and the other is a lot smaller, dressed in a similar uniform. The larger figure, the headmaster of a private school in […] 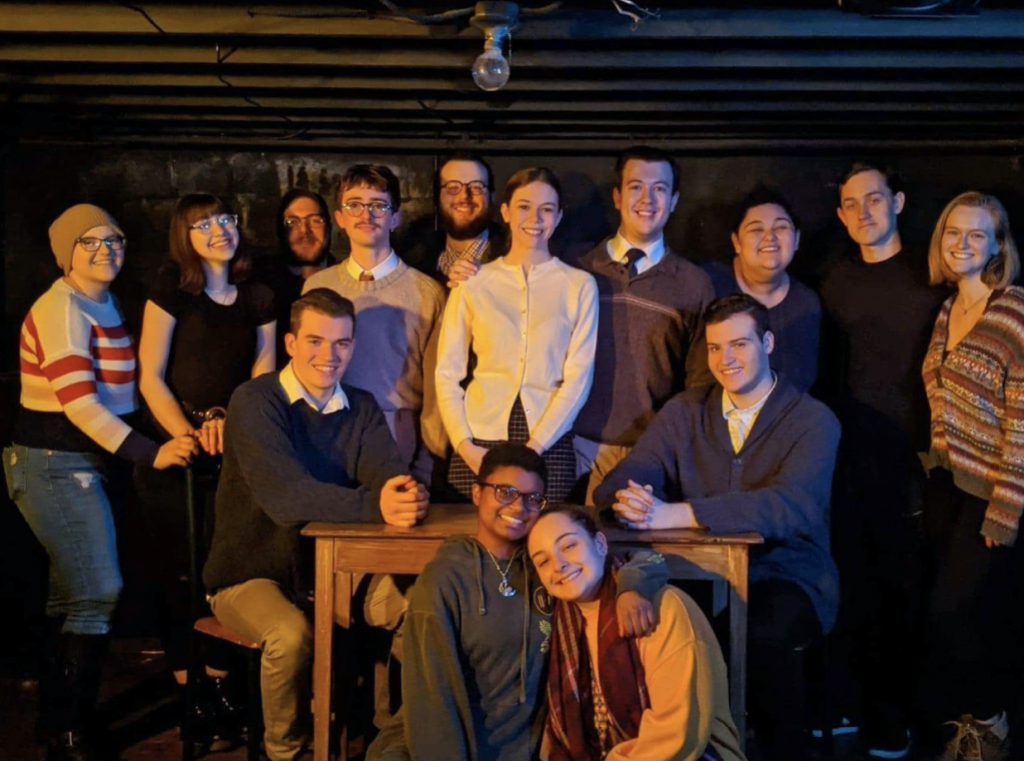