New Paltz, N.Y.– At the beginning of the 2019 school year, New Paltz made history by having the highest percentage of students of color it’s ever had for its incoming freshman class at 48 percent, a 5 percent increase from last year’s first-year enrollment rate, according to the New Paltz Institutional Research. While New Paltz is still a predominantly white school (PWI)—62 percent of the overall undergraduate student population reported as White— the face of the school is changing with “diversity” being splashed all over the front page. However, the majority of these statistics and students come from multicultural programs like EOP (Educational Opportunity Program), LACS (Latin American and Caribbean Studies), Black Studies, and, of course, the Scholar’s Mentorship Program.

The Scholar’s Mentorship Program focuses on building a safe and supportive community for multicultural students on the SUNY New Paltz campus while discussing the educational disparities of underrepresented people. Originally founded by the Black Studies Department as a networking initiative for students of color in 1988, it later incorporated the Peer Mentorship Program founded by Gweneth Lloyd of the Psychological Counseling Center on the New Paltz campus. It encompasses all the previous initiatives to be the multi-faceted program it is now that helps students of color transition to college and become mentors and leaders on campus.

With that being said, SMP has been a vital part of the New Paltz community and aided in diversifying the campus while also having the necessary tools and knowledge to retain students at a successful graduation level. Especially since dropout rates for certain racial groups are higher, despite the fact that enrollment rates are at an all-time high for people of color. Particularly, Black students, despite representing a larger share of the undergraduate and graduate population, have lower six-year completion rates, 46 percent at public institutions, 57 percent at private institutions, according to The Chronicle of Higher Education.

The graduation rate at SUNY New Paltz  (for a four-year duration) in 2014 for the total of all first-year, full-time students was 61.7 percent. In comparison, for Black or African American students, it was 53.5 percent. For SMP students in 2014, it was 58 percent. However, the graduation rate for SMP has skyrocketed (for a six-year duration) to 82 percent, according to the Scholar’s Mentorship Program Office. Thus, having programs that help with retaining students of color are essential in order for them to make it through undergrad years, and beyond. It is not simply about seeing diverse faces on campus, but helping diverse students actually succeed that makes an institution, well, diverse.

However, since the commencement of the Scholar’s Mentorship Program, there has been a serious lack of funding and physical space for students of the program to go to. The SMP office currently resides in the trailers behind Bouton Hall and has resided there for 14 years. Besides the two offices in the Faculty Office “Building” (in reality, trailers), SMP students have access to the MLK Center in the basement of Shango Hall. There they can do homework, hang out, and access computers. But, the basement often gets flooded, damaging equipment and making it unsafe, leaving students with nowhere to go. Not to mention that the program also currently has the director as the only staff member. In spite of this, SMP has grown tremendously in student intake and applications. In 2016, the class size of the first-year students was a little less than 100 students. Today, the program supports and counsels 300 first-year students.

Mark Rumnit, the director of SMP, recently announced that the SMP offices will be moving into a new space, or rather finally getting a space. In the fall of 2020, the new SMP location is expected to be open to the students and public, next to their “cousin” program, EOP, in the basement of the Student Union Building. “It’s going to provide us [with] the adequate space that we need to be successful…it’s going to give us the opportunity to support students, not only support students that make it here to this institution, but also to recruit students to come here and have some of the experiences our current students have. That’s exciting,” says Rumnit of what the new space will do for the future of SMP.

Many of the SMP students are excited for the bigger and newer space that will finally allow them somewhere to go to congregate for schoolwork, or simply to talk and share experiences. “A lot of different people have come together to build this and trying to find ways to improve. It’s great to see how established we’ve become, as well as being recognized by the campus,” says Desiree Gonzalez, an SMP graduate and former president of the Scholar’s Mentorship Program Club.

I myself am an SMP member and will have completed the program in the spring of 2020. Sadly, like the rest of the members from my class year, I will not get to experience the new space but look forward to the new prospects it brings to the future students of color and to the future of SMP. Yet, I can’t help but ask myself, why did it take so long to get here?

I recall to my freshman year, advocating to the at-the-time provost, about the massive need for space, adequate enough to hold all SMP members (especially since it has tripled in size), and four years later, it is finally in the works.While this is a massive win for the multicultural community on campus, the question still remains of how much longer will it be till the next win? Another five years? How much longer will it take to meet the needs of students of color on this campus, while we simply just get placed on brochures?

While I do not have the answer, I can only hope that the administration will start having honest conversations about where time and money is being allocated to. I can only hope they see the worth of programs like the Scholar’s Mentorship Program and how a win for students of color is, in fact, a win for everyone.

New Paltz Marches for the Future

Thu Dec 12 , 2019
NEW PALTZ— Sounds of the battle drum ring out on the sidewalks of New Paltz. The battle against climate change has begun and some community members are answering its call. On Dec. 6, a Climate Strike March took place starting outside of the Humanities building and ended with a rally […] 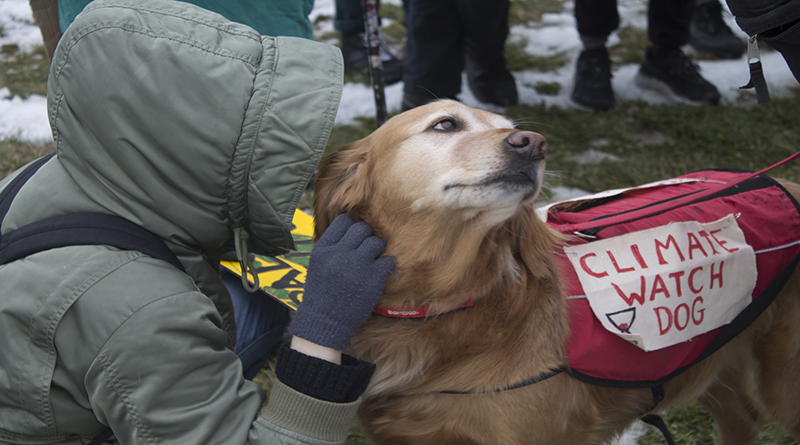