A woman in a black dress, laid out on a chair in her living room, coughing up blood. A well-dressed man crumpled into the corner of a barren home, desperate for closure. The sound of sharpening shears washes through a small bedroom while a little girl tells us how she lost her life. These are some of the tense experiences presented before those who go to the Haunted Huguenot Street tour on the weekends of October.

Every year, for over 10 years, the Historic Huguenot Society in New Paltz, New York, has been running the “Haunted Huguenot Street,” where a tour guide walks visitors through the well-preserved Victorian-era homes and reveals the stories hidden within the old walls.

“It was amazing,” said Genevieve Casagrande, a flight attendant for Delta Airlines who was visiting the area specifically to experience the event.
Casagrande attended the event with a couple of friends that she had been visiting, and at several points was brought into the performance herself. The actors at various points asked questions of the crowd, and Genevieve was quick to respond to many. She had nothing but praise for the writer of each of these scenes.

“It was so creepy; the writers did an amazing job,” she said toward the end of the tour. For the past three years, Amber Neilson, the arts and interpretation manager of the Historic Society and SUNY New Paltz alumna has been taking the helm with organizing the event, doing in-depth research using her access to the Huguenot Street archive, as well as the Library of Congress to find out previous residents mysterious causes of death. There was no scientific method to which stories were chosen. “I wanted to pick the stories that stood out the most. Ones that made waves over the town.”

This year, she picked stories involving the “fashionable disease” that was known as consumption, suspicious deaths at wells and a brief story about the suspicious “Man in Black,” that has been a legend in the town of New Paltz for years.

Neilson uses this information to write scripts for each spot along the tour. These scripts are used by the actors, volunteers and students from the SUNY New Paltz department of theatre arts to fully embody different characters from the history of Huguenot Street. The Huguenot Historic Society pulls talent from several different sources to create this experience.

“We have a mix of people that help us out,” Neilson explained. “Some are volunteers, some are students at SUNY New Paltz, and sometimes we even bring in actors to fill in certain roles.”

Those who go to SUNY New Paltz might recognize the faces of Shannon Colfer, Courtney Williams, and Lucas Anderson, each of whom offer talented performances as Spirits who come back to tell their stories. 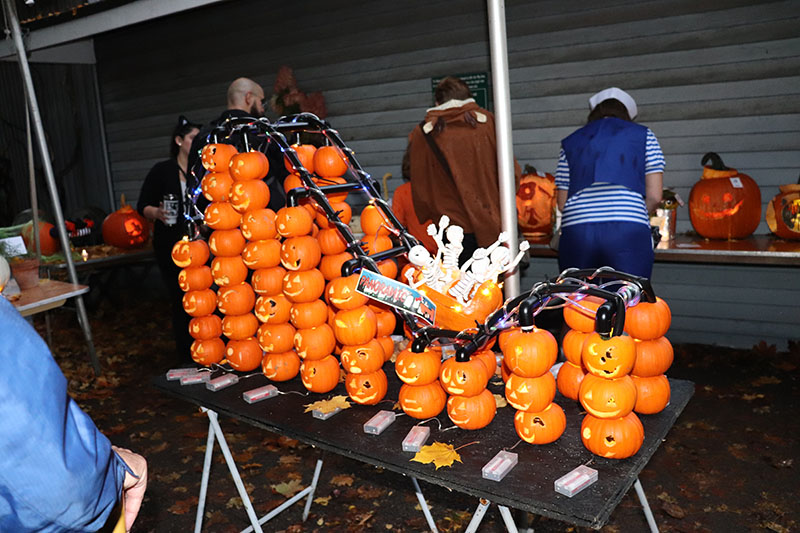