KINGSTON – NY Farm Animal Save, a group of animal rights activists, gathered outside Charles River Laboratories in Kingston to protest the inhumane treatment of animals undergoing tests on Sunday, Sept. 9.

Despite receiving many honks of support from passing cars, one pickup truck driver stuck the middle finger up at the crowd, and followed it with a rev of the engine and a black cloud of exhaust being cast onto the protesters.

The disapproval of passing individuals isn’t new to Miriam Chisholm of Kingston, founder of NY Farm Animal Save. “Someone threw a banana peel at us once,” she said.

Chisholm founded the group in 2013 while living in New York City. Up until March 2018, the organization held monthly vigils in protest of live animal markets. When she moved to Kingston, she focused her efforts on local issues and began vigils outside Charles River Laboratories.

NY Farm Animal Save’s website references an article from the Journal of American Medical Association which states that treatments developed for animals rarely translates to humans. However, Charles River Laboratories’ website states that human organs are very similar to animals and that animals are important to understanding disease progression.

Chisholm says that this disconnect is attributed to money.

“It always comes down to money,” Chisholm said in regard to the opposing views on animal testing. “If you follow the money you’ll see Charles River, Albany Medical College, the Center there, they get thousands, if not millions in grants from the National Institute of Health. So it really is all about money.”

Chisholm wants more people to know about alternatives to animal testing, such as microchipping, organ on a chip, simulators, and microdosing with human volunteers.

“These alternatives are out there,” she said. “They’re probably cheaper, but because they make so much money doing it [animal testing] they don’t want to stop.”

“The survival rates for major diseases are at an all time high thanks to the discovery of new drugs. Our work is an essential component of the research that has led to these discoveries and is required by the FDA,” Cianciaruso said. “Charles River has played a vital role in virtually every medical advance for humans as well as animals.”

Yet, one of the big issues surrounding animal testing activism is the misinformation held by the general public, Chisholm said. “A lot of people say, ‘Oh, they’re still testing on animals?’ and they think that’s over with, that it doesn’t happen anymore. And then people are so concerned with their own health, they’re like, ‘Well if they don’t test on animals what are we going to do? We’re going to die!’ and you try to explain to them no, there are safer, more efficient methods, and they don’t want to hear it. They’re just stuck in that tunnel.”

Another member of NY Farm Animal Save, Courtney Grahm, told people to research the products they are buying. “There’s already people who have done the work, and you just have to look for it,” she said. “It’s little things like searching where your stuff comes from that makes a big difference.”“Charles River has a deep commitment to animal welfare and we make every effort to exceed national standards for the care of the research models under our stewardship,” Cianciaruso said.

Future vigils will be announced on the organization’s Facebook page and on nyfarmanimalsave.org.

Human Interactions on the Streets of New York City

Wed Sep 26 , 2018
In 2017, photojournalism students were challenged by professor Kimberly Ruth to capture street scenes of people and their interactions within their environment. This open ended assignment yielded artistic interpretations from Melissa Aldridge. 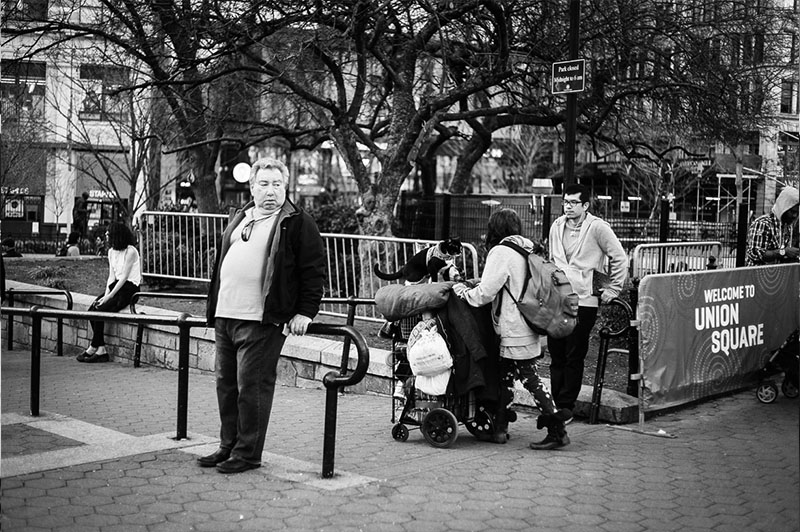