Thirty-seven-year-old New Paltz resident Joel Guerrero is currently being detained at the Hudson County Correctional Facility in New Jersey, according to the Immigration and Customs Enforcement (ICE) online detainee lookup. If Guerrero is deported, he will leave behind his wife Jessica who is six months pregnant with the couple’s first child.

Guerrero, a native of the Dominican Republic who came to the U.S. as a legal permanent resident when he was 17, is fighting a six-year deportation order and was detained in late February during a biannual check-in with U.S. ICE in Manhattan.

ICE was established 14 years ago and according to the official website of Homeland Security, is the largest investigative agency of the Department of Homeland Security (DHS) and was created “based on the recognition that global threats have become more dangerous, and a new approach was needed to ensure the security of the U.S. homeland and the American people.”

ICE is present in all 50 states and 48 foreign countries and over the past decade has improved border security by increasing their presence on the southwest border. ICE prioritizes immigration enforcement by targeting criminal aliens and those who pose a threat to the nation. Guerrero is not one of these “high-priority” immigrants.

Guerrero was a permanent green card holder until a marijuana misdemeanor in 2006 demoted him to a “temporary immigrant” and an order of removal was issued in his absence by the judge when he failed to appear at a routine check with his respective ICE officer in 2011.

According to The New York Times, the U.S. Department of Homeland Security is implementing new immigration policies under the Trump administration that includes an expansion of immigrants prioritized for deportation, the hiring of 10,000 border security agents and officers and the building of a wall along the border with Mexico. However, President Donald Trump has not stated where the funds for these initiatives will come from.

Photos taken by Department of Homeland Security and Wikimedia

Deportation from the U.S. does not happen overnight and it involves many steps, from the initial notification, to one or more hearings, to the judge’s order of removal, to the actual transport out of the country.

The Immigration and Nationality Act (INA) provides for several types of due process to be accorded to an alien facing deportation. The particular process an individual faces depends on the facts and circumstances surrounding his entry into, and stay in, the U.S. Some of the factors include whether the initial entry was legal or not, whether the individual has been convicted of a crime and the type of crime committed.

Under Voluntary Departure, the individual is held in detention pending his departure; and the departure, when it occurs, will be under safeguards — including an escort by armed, uniformed ICE officers to ensure that the individual in fact leaves the United States. By departing voluntarily instead of being formally removed, the individual escapes the possibility of being criminally charged with a federal felony for reentry after removal, should they get caught returning illegally in the future.

In a letter to top federal officials, Cantil-Sakauye voiced her opinion that immigration agents should not use courts to track down immigrants for arrest.

“Courthouses should not be used as bait in the necessary enforcement of our country’s immigration laws,” she wrote in the letter addressed to Attorney General Jeff Sessions and Homeland Security Secretary John Kelly.

This opposition had been met with little correspondence via ICE but Virginia Kice, Regional Director for Immigration and Customs Enforcement, said, “While ICE does arrest targets at courthouses, generally it’s only after investigating officers have exhausted other options.”

Cantil- Sakauye cited the enforcement policies being upheld under the Trump administration as compromising to the core value of fairness as well as undermining the judiciary’s ability to provide equal access to justice.

“Because he was registered and following the procedure of his biannual visits, he was doubly unlucky in the fact that they knew where he was whereas a lot of undocumented workers are not registered,” Miller said.

Miller explained that this cannot result in anything positive citing that cases like Guerrero’s are a major disincentive to immigrants to comply with the law and the judicial system.

“People are avoiding all contact with the justice system, even in cases that would be relatively benign to matters of immigration,” he said.“The Guerrero case is illustrative. Here is a guy who is embedded in the community, he’s married an American citizen, he’ll have a child in the community and he’s been picked up for a minor drug charge. He does not seem to be any threat to anyone and is known to be a good contributing member of society.”

Miller explained that a shift in administration has resulted in a direct change in enforcement tactics.

“The fact that someone like him could be deported shows you where the administration’s priorities are right now,” he said. “In the past, he would have not been picked up; he would have been ignored.”

According to Miller, Trump has given a fairly broad mandate to ICE to detain and expeditiously deport.

“Right now they say they aren’t going to go after specific subcategories like the ‘dreamers’ but many are being picked up in raids due to the fact they live in homes with other immigrants,” he said. “ICE agents have free reign to pursue things in a way they weren’t able to under the Obama administration.”

Tue May 9 , 2017
By Briana Bonfiglio This article first appeared in The New Paltz Oracle. As of Fall 2017, applicants to all SUNY schools are no longer required to check a box stating if they have committed a felony. This SUNY-wide policy passed thanks to SUNY New Paltz’s own “ban the box” initiative, […] 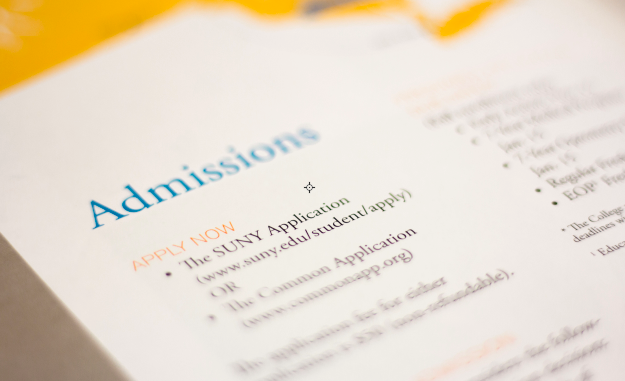