Various restaurants in New Paltz are dedicated to utilizing the farmlands surrounding the area to feed their costumers. With an ever-growing desire for people to eat and shop local, this Ulster County town and three restaurateurs in particular are answering this international call.

Lagusta Yearwood became a vegetarian at age 12 when she began to think deeply about meat. According to the entrepreneur, growing up in Phoenix, Arizona sheltered her from alternative plant-based diets. Everything changed for the now local business owner when she began attending meetings for an animal rights group with her mom.

“Everyone there was vegan,” Yearwood said. “We started eating more and more vegan products. It’s so natural to be vegan now.”

Yearwood’s commitment to veganism has spread beyond her personal life and into her businesses—all of which use organic and fair-trade ingredients whenever possible.

“When I train a new person, I always say, ‘A business makes money because they save on labor, overhead, or inventory, but we don’t save money on any of those things,’” Yearwood said.

Commissary’s! recipes for food are completely determined by their partnership with Long Season Farm, a small farm located in Aquebogue, New York, focused on providing seasonal vegetables. The farmers, Erin and Sam send Yearwood a list of their available produce weekly. Then Yearwood plans menu items around the ingredients.

“I feel like it’s the chef ideal to have a farmer that’s growing stuff just for you,” Yearwood said.

Commissary! has their main food: breakfast soup, cheese plates, beans and greens, (which Yearwood’s staff makes), and then all the specialties that Yearwood concocts. However, among their hearty food exists a plethora of drinks, ranging from every kind of coffee to exotic teas and slushies.

College student Casey Beyer is one of the many ethically treated employees at Karma Road. She started working there around eleven months ago and has loved it ever since.

“I actually enjoy coming in to work in the morning because everyone who works there is so amazing and my bosses, Seth and Jenn, are incredible,” Beyer said. “It’s a really great environment all around.”

According to Beyer the best part about work is the food. As a vegan, she enjoys being surrounded by delicious vegan food. Beyer mostly does produce shifts, which involve cleaning and prepping veggies for the shop. She said that  one of her favorite things to work with is the fresh produce the eatery provides.

Beyer’s list of favorite dishes at Karma Road is endless, however, she always recommends the baked tofu. It’s a marinated baked tofu patty with their house made walnut pesto, roasted red peppers, lettuce and “Vegenaise” on Bread Alone bread. She admits that if she’s in a decadent mood she’ll add some local sprouts and tempeh bacon.

“I love this dish because the pesto is one of my favorite extras on the menu,” Beyer said. “I usually add it to everything I get there, salads, breakfast, deli items. I eat there every shift because the food is so tasty.”

Beyer has worked in restaurants that are not vegan. She feels better at Karma Road knowing that she is contributing to a business that is not doing any harm to the planet and the creatures that inhabit it. She noticed that this vegan store makes a lot less waste compared to the other places she has worked.

“When I do produce, I prep so many vegetables each day, it’s wild, but it’s amazing because we use all of it,” Beyer said. “Every dish is plant-based, nutritious, ethical and free of harm, which I appreciate so much, as do our customers.” On-campus nutritionist for the State University of New York at New Paltz Emily Ferencik, believes that what is good for the planet is good for our bodies as well. She said healthy soil produces healthy plants and the same goes for meat and dairy products.

“When we treat our plants and animals with chemicals, pesticides, antibiotics, hormones etc. — it not only pollutes the environment and interrupts the ecosystem, but it decreases the nutritional quality of our food,” Frenecik said.

She said conscious eating is necessary for health on every level. Ferencik defines mindful eating as honoring what your body needs most on a moment-to-moment basis, while being mindful of the environment. She supports veganism and understands that it can meet nutritional needs.

However, Frenecik does not think that everyone’s constitution is suited for it. Yet, with that said, there are certainly ethical ways to operate as an omnivore like: choosing animal products from local farms, keeping animal proteins to a minimum and focusing on plant-based foods to comprise the majority of a diet.

Co-owner and executive chef of The Village TeaRoom Agnes Devereux is an ethical omnivore and she operates her business that way. It’s been 12 years since the restaurant that was once a two-family home opened its doors.

According to Devereux, when her and her family first moved here from Brooklyn, New York, 16 years ago, she was excited to live near farmlands. However, when they came to New Paltz there wasn’t any local food in the restaurants. She said you could not even buy a local apple at a store in 2004.

“I wanted to open a restaurant that used local ingredients and celebrated the seasons and cooked seasonally,” Devereux said. “It’s a big trend now, but people didn’t know what I was talking about 12 years ago.”

Devereux and her husband started off with a more casual atmosphere during the day with a counter service at lunchtime. In the evening, there remained a single prefixed menu with a vegetarian option, which soon ended and was replaced by a regular menu.

“We wanted to have a restaurant that’s run ethically,” Devereux said. “We run what’s called a triple bottom line business, which focuses on people, planet and profit.”

Devereux recycled an old building and transformed it into a restaurant. She took a lot of the original pieces from the first foundation and reused them. The shelves in the main dining area that house different alcohol are the wooden floor from the initial second story. Various doors were all salvaged from different places and the dining room floor consists of the green product, linoleum.

The restaurant sources their meat and vegetables from local farmers. Their dairy is local year round and most of their alcohol (beer, cider, vodka, bourbon, wine, etc.) is local, too. A chalkboard sandwiched in between the shelves lists their used farms and it can be found on the cover of the menu as well.

“I love food so I’m an omnivore and I embrace foods of all kinds that are real,” Devereux said. “The Hudson Valley is famous for dairy and its what this area produces. It’s the best in the country, so I embrace those ingredients.”

Sun May 7 , 2017
By Thomas Giery Pudney To read the full story, click onto our Atavist page. 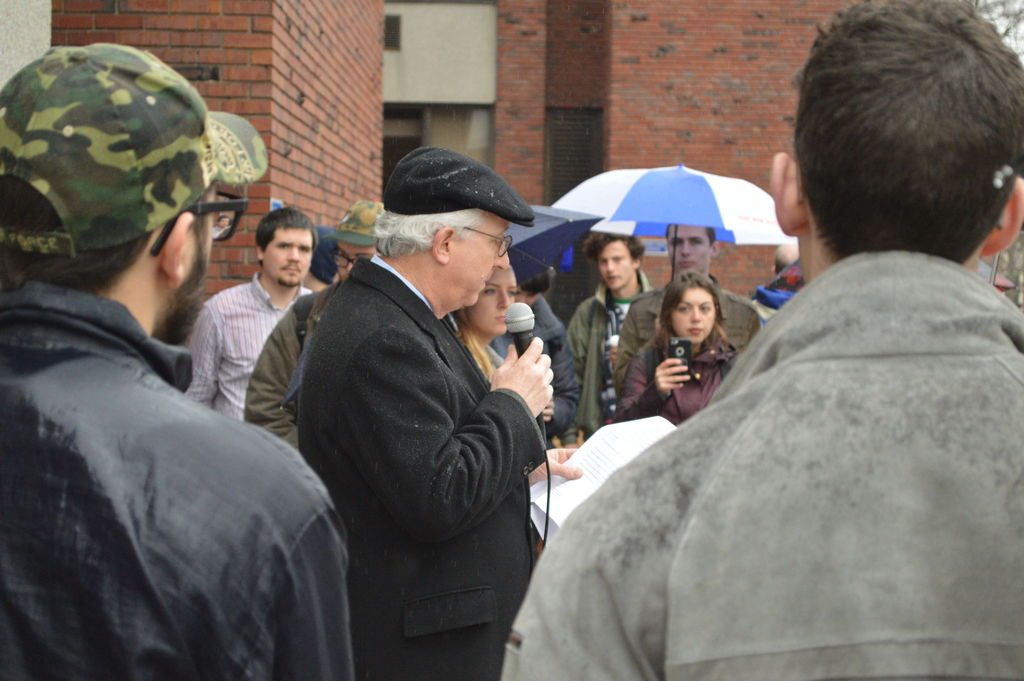