Fred Seibert is a name that may not be automatically recognized (although it should), but the companies Seibert has worked for and the projects he has approved are well-known by people of all ages, all over the world. The PowerPuff Girls, Dexter’s Laboratory, Cow and Chicken and Adventure Time are a few of the many iconic cartoons green-lit by Seibert. On the evening of March 11, Seibert held an interview and Q&A at the Norman Rockwell Museum in Stockbridge, Massachusetts discussing his career and how he got to be such a success.

Ironically enough, Seibert got his start in the jazz music industry, but not as a musician. While studying at Columbia University, Seibert became a radio DJ and a record producer. At the age of 19, Seibert was introduced to the industry of entrepreneurship. He and his partner Tom Pomposello, started their own recording company: Oblivion Records. Although the business couldn’t seem to turn a profit and subsequently closed after recording approximately half-a-dozen records, Seibert’s production of Hank Jones’ Bop Redux won a Grammy nomination.

A few years later in 1981, Seibert had made the change from college radio DJ and amateur record producer to becoming the director of on-air promotions at The Movie Channel. It was at this job that Seibert’s boss presented him with the opportunity to help launch an up-and-coming cable channel that would play music all day and all night. This was MTV: Music Television. In charge of designing the logo, Seibert wanted to create something uniquely different but the rest of the staff didn’t seem to be on the same page as him. Other designers thought Seibert was crazy, but he viewed the first MTV logo as a success. “This is rock-n-roll, we don’t play by the rules here!” Seibert exclaimed.

At MTV, Seibert was responsible for overseeing nearly every aspect of the company–programs, promotions, advertising, contests, premiums and consumer products.

But this gig wasn’t crazy or creative enough for Seibert, so in the early 1980s Seibert pioneered yet another company. This time with producing partner, Alan Goodman, at his side. The Fred/Alan company went on to work with some pretty major clients; MTV Networks, Showtime, A&E, TBS, HBO/Cinemax, The Movie Channel, Barq’s Soft Drinks and even BMG Records. Most importantly, the Fred/Alan company wasn’t a fan of burning bridges, so Seibert and Goodman were able to keep a tight-knit relationship with MTV and its subsidiaries. Because of this, the Fred/Alan company successfully relaunched Nickelodeon in 1985. Prior to the Fred/Alan overhaul, Nickelodeon was a branded network for kids that was failing miserably.

“It was a kids’ network and they weren’t even watching because kids’ thought Nickelodeon was ‘for babies,'” Seibert said. “So we rebranded the entire channel, we designed a new logo and created a new look and sound, overall.”

Then about a year or so later, Seibert pitched the idea of Nick-at-Nite–a late night TV show dedicated to oldies reruns. Nick-at-Nite was an immediate success. The Fred/Alan company is also responsible for the relaunch of VH-1 in 1991, using “The Greatest Hits of Music Video” to draw in and develop an audience. This was the first time VH-1 had turned a profit.

However, the Fred/Alan company didn’t plan to just rebrand and remarket old material, they had big plans to develop some series of their own, which is exactly what won the company three ACE awards for their HBO and Nickelodeon content. They even developed the very early stages of what we know today as Comedy Central.

Then in 1992, Seibert became president of Hanna Barbera Cartoons even though he didn’t know a single thing about cartooning. Seibert recalled the first day he walked into the Hanna Barbera studios, “I introduced myself as their president and said that I didn’t know a thing about cartoons, but I was good at my job and they [the cartoonists and creative heads behind production] were good at their’s, so we would learn from each other and make this work.”

Seibert had a simple plan: whatever worked in the past to create history’s greatest cartoons, would work for him too. So Seibert headed the “What A Cartoon!” shorts project. These short, seven-minute film clips were inspired by the great cartoonists of the 1930s and 1940s–casting memorable characters with comedic narratives and hilarious gags. Seibert hoped that one of these shorts would be a hit, maybe even lead into a full cartoon series, but other industry professionals just thought he was crazy.

“If I come up with 41 cartoons, isn’t there a chance that ONE of them will be successful?”

That “experiment” as Seibert refers to it, was one of the most successful animated projects Seibert ever headed. The “What A Cartoon!” shorts project ended up developing nearly 50 original shorts, which led to seven half-hour original cartoon series, The PowerPuff Girls, Dexter’s Labratory, Johnny Bravo, Cow & Chicken, I am Weasel, Courage the Cowardly Dog and What A Cartoon! These projects led the company to an Academy Award Nomination and two Emmy Nominations.

“After a dryspell of 15 years, we had six very successful cartoons: Powerpuff Girls, Dextor’s Labratory, Cow and Chicken…” Seibert said.

A year prior to starting Frederator Networks, in 1997, Nickelodeon asked Seibert to work for them. Using similar techniques to rejuvenate the network as he did with Hanna Barbera. Frederator gave Nickelodeon a slew of award and audience-winning cartoons, like that of The Fairly Oddparents, My Life as a Teenage Robot, Fanboy and Chum Chum. More recently, Seibert gave the okay to Cartoon Network’s Adventure Time.

The Most Popular Hanna Barbera Cartoons by Decade

Then in 1998, Frederator Networks released its own series of cartoons through Frederator Studios, the production division of Frederator. But producing original content is only half of what Seibert strives for, he’s a businessman at heart so he needs an audience to sell his cartoons to. And in 2005, that job became a lot easier with the declaration of Channel Frederator. Channel Frederator was one of the first animation channels to hit the internet, helping to ferment the widespread video revolution that is still brewing today.

Over the years, Fred Seibert has found innovative ways to make cartoons fun again and he doesn’t plan to stop anytime soon. He describes the next 10 years for Frederator Networks as “bigger, better, funnier.” Seibert also offered a critical piece of advice to anyone going into the media field, “Never stop creating,” he said. “We all have our moments of success and failure…and we have to hold ourselves accountable for them, because at the end of the day the only person we have to blame is ourselves.”

Check out the video below for a sneak preview of the exhibit and click here for more information regarding the showcase.

My name is Marisa Losciale and I’m from Merrick, New York. I’m a double major in journalism and communications with concentration in public relations. Frank Zappa is my personal hero. 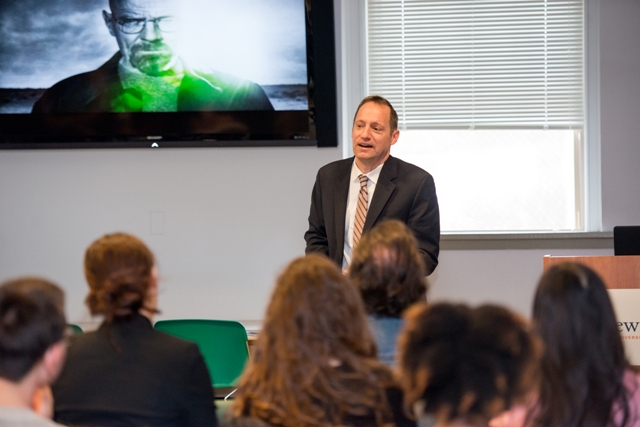