It’s 4:45 p.m. on a Wednesday at The Gilded Otter. The large west-facing windows create a beautiful background for the diners as the sun sets behind the Shawangunk Ridge. It’s a relaxed evening before the dinner rush, with only a few people sitting at the wooden wrap around bar. One middle-aged woman with blown-out blonde hair talks on the phone and takes sips red wine between sentences. An older man wearing a black leather jacket sits a few stools away, drinking a tall glass of beer and tapping away on his smartphone.

Today, Putzer is hosting. Instead of wearing all black like the servers, she’s wearing a white lace top, black pants, and tall black leather boots. She could be a Marilyn Monroe doppelgänger with her red lipstick, long lashes, and short, poofy blonde hair.

“I’m in ‘The Twilight Zone’ right now. I’ve only gotten a few hours of sleep,” she said to a server.

She reaches the hostess station and flips through the reservation book sitting on the podium to see how busy it will be tonight. Then she opens her paperback of “Game of Thrones.” She’s at the part where Bran Stark is bedridden after Jaime Lannister pushes him out of the tower window.

“Sometimes I can read 50 pages of a book in one sitting, but I probably won’t be able to tonight,” she said, glancing at the reservation book again.

Before she can flip to the next page, the phone rings.

“Gilded Otter, this is Harley,” she answers.

She picks up a black pen and scribbles a new reservation in the booklet for 6:30 p.m. tomorrow just as two women walk into the restaurant. She takes down the reservation quickly and hangs up.

“Two for dinner?” Putzer said in a perky voice.

They say yes, and she picks up two menus hanging from the hostess podium.

“I can take you right this way,” she said and leads them to a table along the windows.

She heads back and forth from the dining area to the hostess station as more people come, answers the phone in between, and chats with the other servers when there’s a few minutes of spare time.

“It’s a continuous cycle,” she said. “I answer the phone, write down the reservation, pick up menus, seat down customers and go back, read my book and answer the phone again. I try not to look at the clock and time moves faster.”

She picks up “Game of Thrones” again and slips into the land of Winterfell to escape from the chatting diners, clinking of silverware, and shrill ring of the telephone for a few minutes…at least.

“If I was really focused on saving money, I would be set to move on with my future. But then I wouldn’t be living.” – Harley Putzer

Putzer didn’t think she’d still be working at The Gilded Otter after graduating last May with a bachelor’s degree in theater and an art studio minor. She thought she’d be working with the Hudson Valley Shakespeare company on costumes, hair and makeup, or as an actress. Instead, she lives in the Village of New Paltz with two roommates and pays $595 a month in rent plus $75 for utilities. She works full-time and alternates among four different positions at the restaurant. She makes $9 an hour food running and doing expo, which is making sure the food in the kitchen is cooked right, plated perfectly, and is set to be served. She makes $8 an hour hosting and serving. Tips can be only $50 one week or $250 the next.

The face of minimum wage jobs is changing. It’s no longer just for high school teenagers tearing off ticket stubs at the movie theater or wiping down tables at their local restaurants. An increasing number of college graduates, like Putzer, are filling jobs lower and lower on the job ladder, according to a study published by the Federal Reserve Bank of New York. The study also found in 2012, 44 percent of employed college graduates under age 27 were working in a job that did not require a college degree.

Around 224,000 people nationwide with a bachelor’s degree are underemployed, more than twice as many in 2005, according to U.S. Bureau of Labor Statistics. A degree is no longer the guarantee to a good life it was once. Students like Putzer followed the advice of their parents to go to college, but are failing to successfully launch into the job market.

Working at The Gilded Otter was Putzer’s weekend job during school, giving her extra cash for art supplies and eating out. Now, it’s her main source of income. Putzer’s parents don’t give her money like they did during school. Her mom has been out of work on medical leave for months and her dad has collected unemployment for five years because of heart problems. Putzer knows they can’t help her as much and feels too guilty to ask for money. She realizes she needs to take care of herself.

She stayed in New Paltz after graduation, hoping to find a job with the Hudson Valley Shakespeare Company. She found out the audition dates were months before.

“They cast their whole season all at once and I missed that deadline,” Putzer said. “I was really upset for a while because I’m not doing anything with theater right now, but I just had to tell myself I have my entire life to get back into theater.”

She saves money by eating the restaurant’s food more often than grocery shopping. The restaurant takes $5 out of her paycheck for food and drinks every time she clocks in.

“I’ll always bring a huge thing of salad home and just eat that for a few days,” Putzer said. “Some weeks at work I get really sick of the food but sometimes it’s my only option.”

When Putzer finishes her shift at the restaurant, she likes to paint.

“It’s one of the escapes I have from my every day, boring, work routine,” Putzer said.

An unfinished painting with pastel colors leans against the unused brick fireplace. A few blobs of acrylic paint, some still perfect dollops, are scattered on a piece of paper in front of Putzer. She’s sitting cross-legged on the wooden floor and dips her paintbrush in the white paint. After brushing some outlines of what will be buildings, she dips her paintbrush in water that’s in a sexy Vixen reindeer mug.

“Don’t drink that Arya there’s paint in there,” she said to her tabby cat, who just tried to lick some of the dirty water. She adopted Arya during the summer when a post of the kitty kept showing up on the New Paltz Bartering Community Facebook page. Putzer couldn’t resist her green eyes and sweet face.

Arya meows, but skitters away and jumps onto the windowsill, behind a small aquarium that houses Putzer’s pet gecko, Hercules.

Putzer just started this painting a few days ago. She was inspired by Anderson Paak’s album artwork for “Malibu,” which features saturated colors, such as reds, blues and yellows. She started with a large yellow sun in the middle of her canvas and added pastel purples and blues. She sketches out white and cream buildings with dome tops and a lot of windows, styles inspired by Roman and Greek architecture that she loves. After painting green hedges around the soon-to-be buildings, she sits back, leaves her paintbrush to hang with sexy Vixen and stares at the piece for twenty minutes.

“I have a picture of what I want it to look like in my head, but I don’t know exactly how I’m going to get there,” she said. “But that’s what I love about painting. Somehow you do find your way.”

Hanging above a piano in the same room is a portrait of Stevie Wonder she painted her senior year of high school. He’s wearing a bright orange top, big blue headphones and large sunglasses. It was the first painting she did in her spare time and not because it was a school project. It also was the first time she blew up a printed picture onto a giant canvas. There’s also an oil painting of Munich, Germany hanging on the opposite wall. She used a variety of pinks, blues, and purples to make the buildings more colorful. Her favorite part are the turquoise windows.

Right now, Putzer is looking for a second job. She sells lithographic prints on her Etsy page for $10 and just got a gig to do holiday-themed window paintings for The L Salon in town. But she knows that won’t be enough to make the transition into New York City.

“I need to live in a place where there’s a lot of theater,” Putzer said. “It will help me keep focused and drive me to get succeed.”

Living in the city at first will be even more strenuous. She’ll need to find an affordable apartment that’s pet friendly. She knows she’ll need to work at least two jobs to pay for rent in between auditions. Rent will be much pricier than in New Paltz. She will have less time to focus on painting and less time to hang out with her pets.

“If I was really focused on saving money, I would be set to move on with my future,” Putzer said. “But then I wouldn’t be living. It’s the struggle between enjoying my life or strictly budgeting so I can take the next step. That’s the hardest part to grasp.” 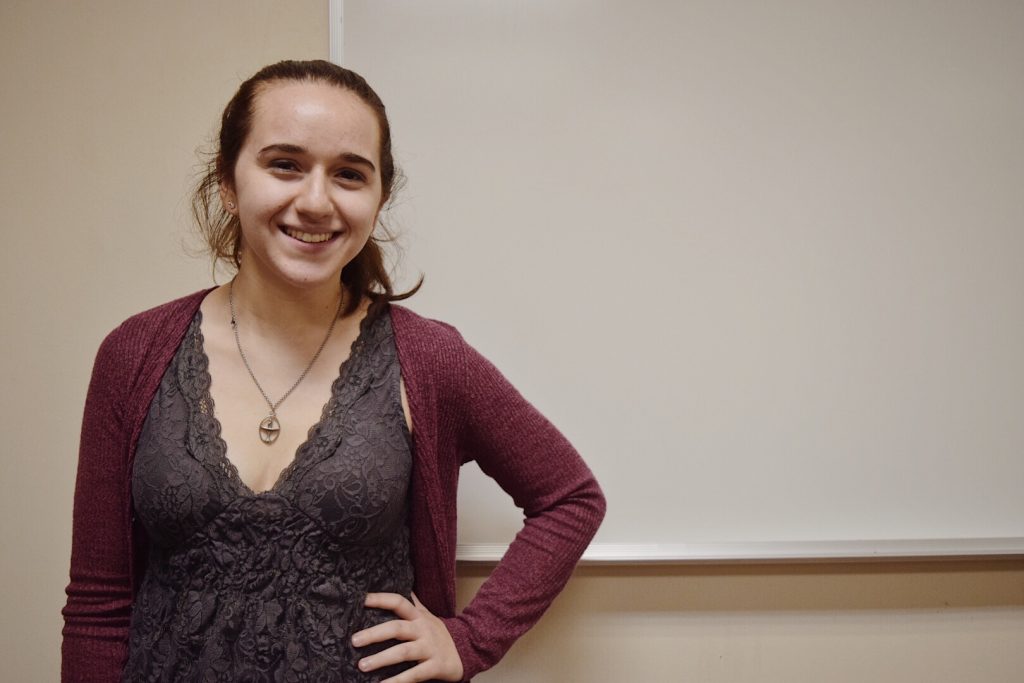