Just by looking at 23-year old Elena Kilcullen, you’d have no idea she was struggling to feed herself and her unemployed boyfriend. Kilcullen is tall and thin with a charred-burgundy, slightly overgrown pixie cut—which conveniently hides her undercut from her professional life. She also has begun a nice tattoo collection, ranging from tributes to her favorite bands to more personal ones inspired by her loved ones, but her work suits adequately hide them.

“Get you a social lawyer that can do both—professional by day, punk by night” her recent side-by-side Instagram selfie reads.

Kilcullen graduated from SUNY New Paltz in 2015, with a degree in psychology and concentration in disaster studies. She now attends Albany Law School, pursing a master’s degree in social work.

Growing up middle class, Kilcullen was awarded some privileges, like the opportunity to attend college and achieve a higher education. But just because she was afforded the opportunity, doesn’t mean she can afford the education. Although her parents helped her pay for her undergrad, alongside federal aid, she is paying for graduate school with a combination of direct and “graduate plus” loans. Direct loans are government-backed student loans with a low interest rate. Graduate plus loans are loans that allow graduate students to postpone repayment of prior loans.

Research done by Big Future, a division of College Board, shows two-thirds of full-time students receive financial aid nationwide. Approximately 57 percent of the financial aid dollars were awarded in the form of grants and scholarships, while 34 percent were in the form of federal loans. The Federal Reserve Bank of New York estimates the national outstanding student loan debt at between $902 billion and $1 trillion, according to the Federal Reserve Bank of New York.

This year, Kilcullen’s university never processed her graduate plus loans, so she doesn’t have the two thousand dollars she’d been counting on for rent, food, cable and other expenses.

“I’ve been having to compensate for all of that with a minimum wage job, which is difficult,” she said.  “I often find myself coming short on a lot of necessities.”

Store brand Spaghetti-O’s, bath tissue, pasta, and other off-brand items line the shelves of Kilcullen’s pantry, clashing with the character of the quaint one-bedroom Albany apartment she shares with her boyfriend. Books, movies and CDs line the white, wooden, built-in shelves in her living room. A flat screen T.V. stands on the far end of a cheerfully painted pale-yellow room, while a colorful tapestry works as a futon cover. The apartment is a serious upgrade from the tenement style apartment she had as an undergraduate. Her new place even has enough space for her two pets: a bearded dragon and a kitten.

“We shop at Aldi, a very inexpensive food store,” she said. “I get employee discounts for my pets needs at my job and my mom helps pay for my medical expenses when I have them. As a student I get to ride CDTA buses for free.”

At Pet Supply Plus, Kilcullen is paid $9 an hour, the New York State minimum wage. She earns $160 a week, which after taxes comes to approximately $132 a week. She was hired there a little over three months ago and uses her employee discounts as a way to save money on necessities for her pets. Her boyfriend is currently without a job and living off of unemployment.

Because she doesn’t have a car and only recently got her driver’s license, her employment options were limited to places she could get to on public transportation or on foot.

“I don’t really think anyone deserves a nine-dollar hourly wage,” she said. “It’s pocket change. No one I work with works just to get pocket change. So we all work as many hours as we can because nobody can survive off of a $100 paycheck.”

And as for her internship, “I pay for everything. I pay for transportation to and from the elementary school, I pay the tolls to get there, I pay for the courses that correspond for it,” Kilcullen explained. “It’s a giant black hole that I have to constantly throw money into so that I can pretend to be a social worker and compensate for the fact that the school district is understaffed, and in need of social workers who can care for the children that need way more attention than I can give.”

Upon graduation, Kilcullen would ideally like to go into public interest law, working specifically on prisoner’s rights cases. This means pursuing separate degrees in both social work and law.

Kilcullen’s decision to work in such a tough field comes from her experience dealing with her cousin’s custodial issues, basically working as an intermediary between the lawyers and her family, including her incarcerated cousin. Essentially translating the legalese into layman’s terms for her loved ones.  Her cousin, who suffers from mental health issues, is a former United States Marine. He went “AWOL,” or the abandonment of one’s military post without clear intent, in early 2014. Only to be found squatting in the bedroom closet of his old house, he has since been charged with murder.

“I remember walking into the house, everything was moved around in all sorts of ways. There was trash piled up to my ankles, just garbage bags upon garbage bags of trash. And that’s not even the worst of it,” Kilcullen said.

“When I got to the room he had blockaded himself in. It was painted black with white tribal-like markings on the walls, and an old antenna T.V. remained on—just static in the distance…he was hiding from something. Something, I’ll never understand, but something scared him.”

Since then, Kilcullen has made it her duty to help those less fortunate than herself.

“There’s so many people incarcerated that are being played by the system,” said Kilcullen. “Over the summer I worked a case where a prisoner wasn’t granted parole because he was fined $1 (a hefty price in prison) for not returning a book on time, but he couldn’t pay the fine because his paycheck from working in the prison hadn’t cleared yet. So I had to work to get him the money he deserved, when all along I wanted to be like ‘Here take my damn dollar, Rikers. If you need it that bad, take mine.’”

But, of course, Kilcullen couldn’t do that.

Not only would giving a client money, which is against prison policies, cost her the unpaid internship she so desperately needs, she could also use the money, no matter how little.

She and her boyfriend each pay half of the rent and for groceries. Her boyfriend is responsible for paying for Wi-Fi and she pays the electric bill. But because her income is more than his unemployment checks, she ends up covering most of the additional expenses.

We live in poverty, but I wouldn’t consider ourselves ‘victims’ of poverty.’ It just sounds really disempowering and pitiful, but it is a main cause of my stress.” – Elena Kilcullen

When it comes to pet-care, their system is pretty much the same. Splitting the cost of insurance, food and any other supplies.

At her job, she works 18 to 22 hours a week. She wishes she could work more, but her school and internship schedule prevents that. Kilcullen’s position is never static, changing with the moons.

On Mondays and Tuesdays Kilcullen works at her internship from 7 a.m. to 4 p.m. She interns at an elementary school, teaching kids on the autism spectrum and with behavioral problems.

On Wednesdays through Fridays she’s in class between 8 a.m. and 9 a.m.

“Only to rush home to eat and then head to work, where I’ll stand on linoleum tiles and under draining, fluorescent, lights until 10 p.m.,” she said.

Saturdays and Sundays she works in the afternoons, so with her only spare time in the morning, she utilizes it to plan for the upcoming week.

“My program is very stressful, but my job is my happy place,” she said. “I need to work to be able to function as a student.”

Although Kilcullen and her boyfriend struggle to meet their financial requirements, she says they somehow make it work. “We live in poverty, but I wouldn’t consider ourselves ‘victims’ of poverty,” Kilcullen said. “It just sounds really disempowering and pitiful, but it is a main cause of my stress.”

She says making ends meet every week takes a lot of mental effort. “Some weeks we’re okay, some weeks were screwed,” she said. “On the weeks we’re fucked, I wash my clothes in the sink so I don’t have to go to the laundromat. I eat cereal, pasta with butter, and peanut butter sandwiches to hold off on going food shopping for another week. It’s really exhausting. I can’t imagine having to think this way for the rest of my life.”

Mon Dec 19 , 2016
By Michael Rosen After Mario Prainito, 22, graduated with a bachelor’s degree in media programming and management, he couldn’t find a full-time job. He did get an unpaid internship in Kingston, a short commute from New Paltz. Prainito stayed in New Paltz, paying rent for the house he has been […] 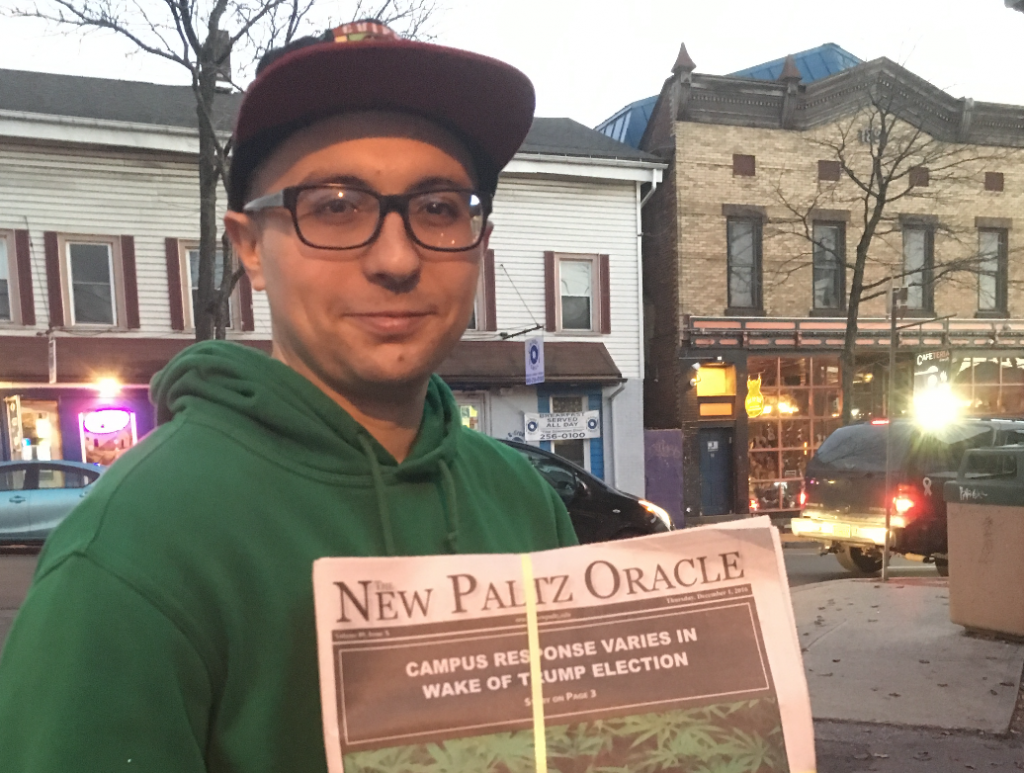