Janet Yusko never would have saw her life go from a having full-time job to seeing her father pass away and returning home to care for 82-year-old mother with dementia.

At age 55, Yusko finds herself caught in a bind. After holding high-level administrative jobs in Ulster County, she’s unemployed and looking for full-time work — a process complicated not only by her age, but her elderly mother’s need for around the clock care.

In 2014, the USDL reported 22.5 percent of displaced workers who worked more than three years in their previous job were not in the labor force.

Two years after her time as the Ulster County continuing care services director, Yusko found that she may never be able to work to her full potential again.

“I may have to work way below my education level, which is a prospect that doesn’t make me happy,” Yusko said. “However, I’ll stick to one of my beliefs — we honor this world with our labor. Sometimes it doesn’t matter how we labor.”

Yusko lives with her mother and her niece in a neighborhood of spread out and well-kept two story split level ranch houses in southern New Paltz. Her mother’s retirement funds and father’s social security money pay for the house and household expenses. Many of the community’s modernized, white vinyl-sided homes that were built several decades ago are set on Route 32 going south for miles.

It’s 8 a.m. on a weekday morning, and Yusko is woken up by her dog, Zouzou. She walks up to the upstairs floor to her mother’s room to make sure she eats breakfast. She steps into the partially renovated kitchen that features white cabinets, multicolored tile floor and the aroma of sizzling bacon filling the air of the upstairs and downstairs floors.

The mother, who has light, wavy gray hair just above her shoulders, is dressed in a black t-shirt and loose black pants. She steps out into the hallway and into the kitchen next to her room for breakfast.

On days where Yusko is not around or up in time, her mother will forget to eat or forget if she’s eaten breakfast at all, evoking a slight sense of anxiety for the mother and daughter.

Over time, Yusko learned that if she could not make herself available to her mother during breakfast time, she would just leave snacks for her mother around the two floor home.

“My mother has physically declined and the question is: Can I leave her alone for eight hours?” Yusko said. “My family doesn’t think so. I could leave her for a maximum of three hours. If I did get a full-time job, I would have to hire an aid. I never thought my life would be like this, I never thought I would be in this position.”

Yusko takes care of the cooking, cleaning, and chores around the five-bedroom house. She says her days are mentally and physically exhausting.

Yusko started her career as a publishing sales representative for Pearson, located in New York City and Atomic Dog, an online publishing company. According to Yusko, these companies turned physical textbooks into ebooks in order to lower the costs of textbooks.

Yusko left her career in the publishing industry and headed to Marywood University in Scranton, Pennsylvania. She rented out an apartment for $500, a typically inexpensive price compared to the housing market in New Paltz compared to now. She eventually received her master’s degree in social work, but the $50,000 loan that came with it was not going to be easy to pay off unless she found work.

She entered the job field as a skilled nursing social worker before in 2007. She was hired as Ulster County director of consumer affairs in 2009. On top of writing press releases to alert the public of consumer hazards, Yusko also made it her job to prevent financial abuse and make sure the community was informed of the financial options they have.

“There was a woman who came here to take care of her mother,” Yusko said. “The mother died from breast cancer and she was down to like 86 pounds. She lived on Spook Hill Road in Ellenville. The woman said to me ‘when it rains outside,’ it rains inside.’ She was living on Social Security that paid her $700 a month and she didn’t know that she was eligible for food stamps or a new roof. It was very gratifying and I was able to help a lot of people that way.”

In 2012, Yusko spent the next two years as director of continuing care services. Her organization created programs and gave presentations to help poor, elderly people about how to access the county services.

In 2014, she was unexpectedly fired. “Six months before they terminated me I asked them, ‘Is there anything I could be doing better?’ They said I was doing everything perfect,” she said. “Then six months later I was gone.

She’s been unemployed ever since. “My demographic is the hardest demographic to find work for at this age,” she said.

After Yusko was dismissed from her job, her father who was a Korean War veteran, was diagnosed with cancer in his liver, spleen and lymph nodes nearly two years later. He was “very old, an alcoholic, and wouldn’t go to the doctor,” she said.

Yusko started off 2015 trying to put her father in hospice — a home providing care for the ill — not the way any individual expected to start off the new year.

“I called the doctor’s on New Year’s Day and asked if we can put him in hospice because he had the diagnosis,” she said. “They kept him in hospice at home and he passed away 16 days later, but we were able to keep him at home. That’s the important thing.”

After her father died, her mother was left without anyone to take care of her. Due to the fact that other family members lived too far away to be caretakers, Yusko moved back home to the split-level raised ranch home and take a new responsibility in her life.

“It’s one of the of the ugliest houses in the world, but hey it’s paid for,” Yusko said.

In order to earn money to pay off her student loans and bills, Yusko works part-time helping an older man with dementia. She earns between $500 and $600 per month.

“I take him out for walks with my dog a few times a week for $25 an hour and I can pay my student loan,” she said. “My mom takes care of the groceries so I get room and board.”

For now it is Yusko’s job to find her way to keep her mother content, occupied and safe.

There’s a few times a week where Yusko has, as she put it, “be sneaky” in order for her mother to still feel she has some independence. Her mother’s loss of mental function affects her ability to control her bowel and bladder. She sometimes forgets to shower. Yusko has to silently tiptoe into her mother’s room when she’s gone, quickly gather all of her laundry and step carefully down the wooden stairs, hoping they don’t squeak on her way to the laundry room.

“A lot of it is being sneaky,” Yusko said. “It’s this thing where she wants to have agency in her life and she doesn’t realize how far she has become. I’ve had to sneak her laundry out her bedroom without her knowing it. My mom is urine, bowel and cotton at this point so doing the laundry at this point is like being a lot of work. I have to separate clothes and wash them in bleach and not tell her about this.”

With the living wage landing at $11.21 in Ulster County and the typical annual salary being $46,680 for workers in community and social service field, it’s difficult for Yusko and many other people in the county to find a job that would cover the cost of her mother’s care.

A living wage is the amount of money a citizen in any county must make in order to pay their bills, feed themselves, and get themselves through their everyday lives. Yusko is not making enough to get by without her mother’s economic support.

She is not currently looking for a full-time job because she is opting to care for her mother instead. However, according to the a survey from Genworth Financial, the annual monthly cost of an assisted living facility for Yusko’s mother would be at least $43,000 a year. The average salary in Yusko’s field — community and social services — is $46,680.

Yusko knows she can not live on the room and board her mother’s money supplies after her mother dies. It may require her to switch locations, something she has not shied from in the past.

“I’m very optimistic that things will get better,” she said. “I’m committed at this point. I’ve lived in a lot of different areas, but I would love to stay in New Paltz. I’ve lived in so many places that it’s hard to start over and build a new community. However, the economy here is not as robust as I would like, but I’m going to remain optimistic that things are going to work.”

If her mother runs the possibility of being placed in a medical facility, it could financially be very costly. The monthly cost of $3,600 would cost over $43,000 per year, making it nearly inconceivable for her mother to be cared for by outsiders. However, Yusko says that for now, her main goal is to not look for a job, but look after her mom.

“I believe that we honor this world with our labor, but all I can think right now is sometimes you work because you need the money and sometimes you work because you have a job to do,” Yusko said. “Right now I have a job to do with my mom. I’m committed to keeping her home as long as possible. I’m not naive to the fact that her care might exceed what I’m able to give. Until that time, I’ll be there.”

Mon Dec 19 , 2016
By Marisa Losciale Just by looking at 23-year old Elena Kilcullen, you’d have no idea she was struggling to feed herself and her unemployed boyfriend. Kilcullen is tall and thin with a charred-burgundy, slightly overgrown pixie cut—which conveniently hides her undercut from her professional life. She also has begun a […] 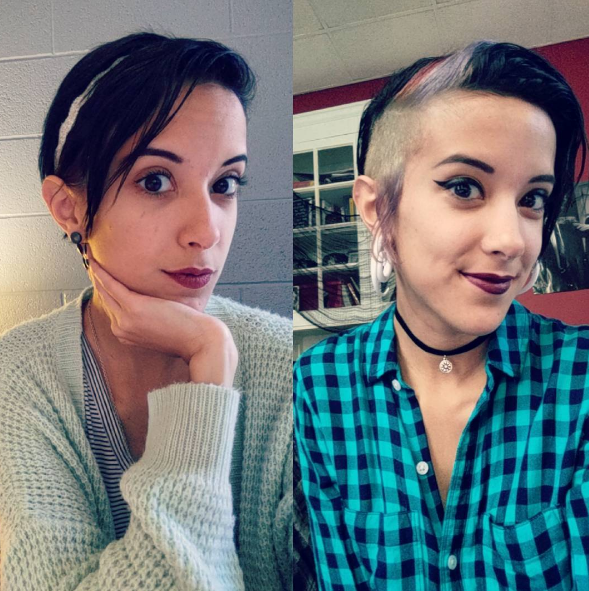