After Mario Prainito, 22, graduated with a bachelor’s degree in media programming and management, he couldn’t find a full-time job. He did get an unpaid internship in Kingston, a short commute from New Paltz.

Prainito stayed in New Paltz, paying rent for the house he has been living in the past two years.

He didn’t want to move back home to Flushing, Queens. His parents often fight, making it a very difficult environment to live in. The fighting also creates tension between Prainito and his parents.

“They do care about me, but I can feel neglected by them from time to time,” Prainito said. “It just makes it difficult to talk to them and have a normal conversation with them, and it’s really hard to be around them when they’re yelling at each other.”

Living at home would be financially easier. He wouldn’t have to pay for rent, food or other expenses until he manages to find a full-time job. But the stress of being home “isn’t worth it,” he said. Prainito would much rather be in New Paltz, struggling to get by and hoping his unpaid internship will lead to something

Unfortunately, this means working two jobs. One of those jobs pays minimum wage for 25 hours a week, and the other he has yet to get paid for.

“I work at Andy’s,” Prainito said. “It’s a Greek restaurant in town. I pretty much work on whatever they ask me to do. I mainly do deliveries, but if they need someone behind the kitchen to work I also work there. I also do the dishes as well.”

His second job entails distributing SUNY New Paltz’s student-run newspaper, The New Paltz Oracle, on Thursday afternoons. This takes around three hours to complete, and he is supposed to earn $40 for each week that he distributes the papers.

“Something was wrong with my paperwork so I have to wait to get paid,” Prainito explained. “But I should be getting paid soon and hopefully it should be a good amount of money.”

His paycheck is expected to arrive by the end of the semester, but the delay has been trying. After four months as an intern at The Chronogram, a monthly free magazine, he decided to quit.

He is only one of many facing the challenge of finding work in their field shortly after finishing school. Research by Accenture shows 51 percent of college graduates from the classes of 2014 and 2015 are working jobs that do not require a college degree.

On a recent night at Andy’s, Prainito washes dishes in the hot, humid kitchen in the back. The place just opened for business this past July, and customers walk in carrying coupons promoting the new joint.

Prainito has his headphones in. Listening to the Red Hot Chili Peppers helps him power through the work. He scrubs fast, knowing there are quite a few deliveries that need to be made.

“Be quick, you’ve got a lot of places to hit up,” his boss says as Prainito throws off his apron and gloves.

He grabs four bags of deliveries and trudges over to his car, earphones still on. The drives around New Paltz provide some fresh air from the kitchen, and a break from work as well as the stress that comes with managing his expenses. The individual deliveries don’t take long. He grabs a bag from the back of his car, knocks on the door, and greets the customer with a friendly “hello!” and a smile. He takes the money. His tips range from $5 to $10. Once the deliveries are complete, he returns and throws his apron back on, waiting for the next batch of orders that need to be delivered by returning to his dish washing duties.

This is a far cry from the type of work he did for his internship at The Chronogram. Instead of washing dishes and delivering food, he worked on their website, checking links and editing out copy errors. He also edited photos, videos and audio clips. Working in media is what Prainito strives to do, but he’d like to be paid while doing it.

“I was very happy to be doing work in my field,” he said. “But I have to make money. That’s my top priority. I have to be able to support myself and pay for all of my expenses, and the internship just kept interfering with the jobs that actually do pay me. It was tough, but I had to leave.”

His rent is $600 per month, with utilities adding around another $80. He usually spends $150 on food and an extra $100 on gas, which was even more when Prainito had to commute to Kingston. This pushes his monthly expenses to over $900. Working a minimum wage job, does not give him a lot of spare cash to save up for the future.

“All I really want is a job in my field that pays me. I’m really not asking for much more than that.” – Mario Prainito

Prainito underestimated the time commitment that having both a job and an internship required. As he began to see the amount of money he required to live in his apartment, he kept needing more and more hours at his job to pay the rent. Even without the internship, he isn’t working as much as he wants.

“I work about 25 hours a week, but I would like to get more hours,” he explained. “The more hours I work, the more money I make. Especially since I’m not with my internship anymore, I have more time to work more.”

Every Thursday afternoon, Prainito stops by the SUNY New Paltz campus and picks up the stacks of papers he has to deliver. It’s a simple job, but it consumes time and gas money that he has yet to be reimbursed for.

Not to mention all of the tricky driving and having to find scarce parking spots around the campus. Sometimes Prainito has to temporarily leave his car parked in an area where it shouldn’t be and pray he doesn’t receive a ticket, which would eat even more into his money.

It is much easier to find parking when he makes his rounds in town, although driving through New Paltz at 5 p.m. is a nightmare. Countless red lights and traffic don’t allow Prainito to finish this simple task till dinner time. Thankfully for him, he can snag quite a few free dinners at Andy’s.

“Not having to pay money to get meals sometimes is very helpful with saving money,” he said.

But Andy’s is not doing so well these days. Now that the novelty is beginning to wear off the restaurant is having trouble drawing in customers. New Paltz can be a revolving door of food places. Prainito worries it may not be long before Andy’s shuts down and he has to find another job nearby.

Prainito hopes that one day soon he will be able to find a job in his field that pays him. If anything, his experience working low wage has trained him for when that day comes. He has learned skills such as how to budget the precious few dollars he makes.

But whatever skills he may currently be learning that will help later in life does not change the fact that Prainito is struggling financially in the present. He isn’t sure how much longer he wants to stay in New Paltz, and if Andy’s shuts down then that decision may be made for him. He is just aiming for one simple thing, yet it has eluded him thus far.

“All I really want is a job in my field that pays me,” Prainito said. “I’m really not asking for much more than that.”

He would like to find a media related job in the Hudson Valley. Prainito loves the area and New York, but does not want to go back down to the city due to his family issues. This is a big disadvantage since there are many more media jobs in the city area, compared to the Hudson Valley. Prainito is beginning to search for jobs he can apply for, but worries that many employers will want more than four months of experience at an internship

“I might just have to suck it up and go home and look for an internship to gain more experience,” Prainito said. “There are more opportunities down there and it would help a lot. That way I’ll have an easier time finding work in the Hudson Valley. But I’m really hoping it doesn’t come to that.”

Making of a Costumed Wrestler

Mon Dec 19 , 2016
By Nick Tantillo There is a laminated sign that hangs in the rear of the Convenient Deli in New Paltz. What used to read “Overnight Shift” has been scribbled out with a black marker and replaced with “Overwatch Shift,” a video game reference. Beneath the black zig-zag is a list […] 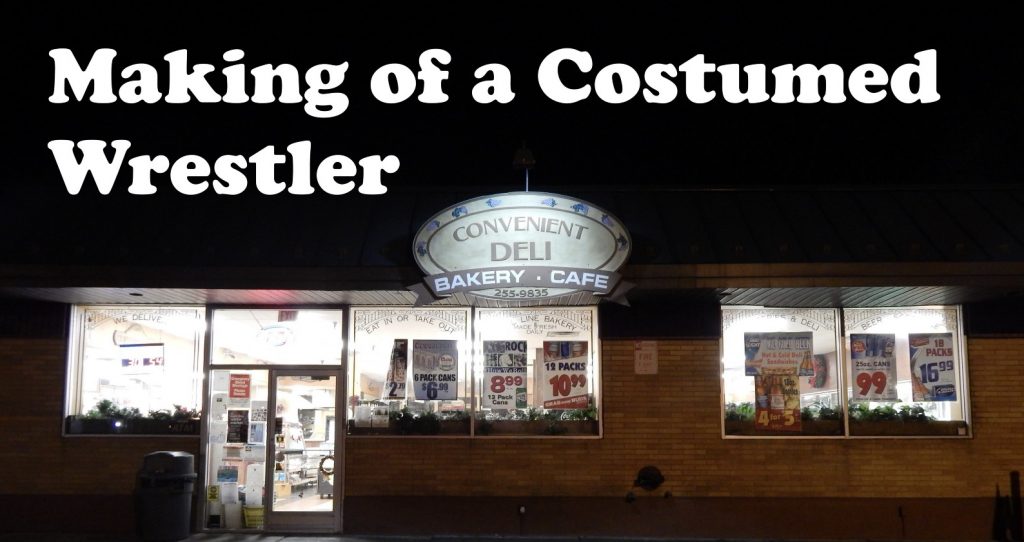