The Hudson River is rising at a rate of 3.2 millimeters per year, threatening over 9,000 acres of riverfront habitats and communities—and there may be nothing we can do to stop it.

Studies by several statewide and local environmental groups show that climate change is already having an effect on the Hudson River. They say it is likely to continue at this rate, causing the water level to rise up to 3 feet in the next century. This means diners at Mariner’s Harbor in Kingston may have to enjoy their meals with their toes dipped in 18 inches of the Hudson by 2050.

Experts such as Kristin Marcell, special project coordinator for the Hudson River Estuary Program, say the only way to slow the process is to stop its root causes, such as the burning of fossil fuels that emit large amounts of carbon dioxide and other greenhouse gases. This kind of human activity has quickened long-term climate change such as the sea level rise seen in the Hudson Valley area.

“Climate change is affecting the Hudson just like water rising in a bathtub, except the water level isn’t going back down.” — Kristin Marcell

This did not happen overnight. The river’s coastline is slowly diminishing due to melting ice-aged glaciers from 10,000 to 12,000 years ago. The aforementioned greenhouse effects warming the earth have been slowly shrinking the ancient glaciers and sending their remains into the sea.

“Recent projections say the sea level will rise to 50 inches by 2100, and up to about 72 inches in the Lower Hudson. We’re tracking the levels in the higher figures, but it will be somewhere in the middle,” said Marcell.

The New York State Department of Environmental Conservation (DEC) predicts the rising sea levels will not only cause localized floods in the area, but also threaten riverside infrastructures and development.

Sacha Spector, a scientist at Scenic Hudson in Poughkeepsie, said communities who plan before they have to recover will be better off.

“We need to make good choices now about what we invest in, instead of recovering in constant defense over the decades to come,” he said.

After hurricanes Sandy and Irene, communities are beginning to think about the next “hundred-year storm.” According to the DEC, the sea level rise makes storm surges far more dangerous to low-lying areas. Spector predicts that as the sea level rises, floods will occur more frequently and with more intensity.

While the Hudson’s sea level projections and its ramifications over the next century seem daunting, experts all over the world, such as the United Nations Intergovernmental Panel on Climate Change, believe we can slow it down by reducing greenhouse gas emissions and adapting infrastructure to lower hazards in the community.

“We still have control over how much damage we will have to adapt to by taking greenhouse gas pollution into account,” Spector said.

Programs such as New York State’s Climate Smart Communities, which has achieved 140 pledges since 2010 from communities determined to fight climate change, encourage the monitoring of damage done as well as the development of action plans to adapt riverside infrastructure and avoid damaging floods.

“The program is run on a scoring system for communities to adapt to climate change. For every environmentally friendly plan, they receive a number of points that eventually turns into funding,” Marcell said.

By pledging to the program, a community becomes responsible for keeping careful inventory of greenhouse gas emissions. They work to create proactive plans to decrease the use of damaging fossil fuels as an energy source in facilities and transportation systems and turn to renewable energy.

Scenic Hudson’s sea level rise mapper predicts the risk of permanent flooding as well as increased coastal flooding. The projection of a 54-inch increase in the Hudson puts 44 households over roughly 23 acres permanently underwater in the city of Poughkeepsie. The increased coastal flooding would endanger an additional 60 households over about 22 acres by 2100. This projection offers a more tangible idea of what is at stake if the sea level continues to rise at its predicted rate.

Mark Lowery from the DEC Office of Climate Change says more communities need to be incorporating the sea level rise issue into local planning, especially when it comes to adjusting building and zoning codes.

“Local governments are on the front lines, but they grapple with the decision to spend time on something chronic that will have serious consequences 100 years from now instead of immediate issues. Communities are struggling with a lack of resources—technology, money, people, a scientific understanding and most of all, time.” — Mark Lowery

The Climate Smart Communities program offers comprehensive zoning tools and checklists that municipalities such as Kingston have used to address the vulnerability of their community and improve resiliency.

“Communities, agencies and homeowners will make decisions about when and how much to invest based on the risk they see,” Spector said. “Adaption allows them to capture their full investment when they take into account what the community will face. The cost will be significantly less if they plan now instead of future recovery because there might by nasty surprises they didn’t consider.”

While these communities work to slow down the process, experts say the damage done so far by global warming cannot be reversed. By stopping the use of fossil fuels or other unclean energy sources, the sea level rise will occur at a slower rate but not stop altogether.

“Most analysts believe it will continue for centuries, even if we convinced everyone to shut down the use of greenhouse gases tomorrow,” Lowery said.

The hypothetical end to global warming and sea level rise would be a scientific miracle, but experts are still hopeful. Until then, communities along the Hudson River need to be planning for how much of the area’s coast will be underwater within the century.

Fri Mar 4 , 2016
New Paltz students joined forces with other SUNY schools to stage a statewide walkout on Friday, March 4 protesting annual tuition hikes. At New Paltz, over 100 students gathered at noon outside the Humanities Building to support the cause. Students from New York Students Rising (NYSR) led the protest, providing […] 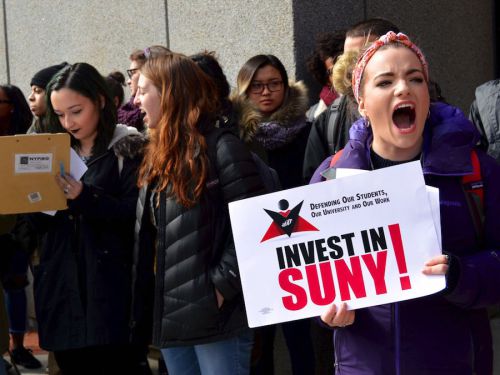