Will a Twitter following of just 250 people limit the success of an up-and-coming journalist? Are traditional editors and publishers being pushed out of the industry by newer, shinier counterparts like Amazon? These were just some of the questions pondered by panelists at the Woodstock Writers Festival.

The panelists made it clear that while the writing industry is evolving, dynamic writers are keeping up just fine. The festival took place in Woodstock, New York, from March 19 to 22. Over the course of four days, writers, publishers, and fans gathered to share their passion and creativity.

Author and publisher Gail Goodwin kicked off the publishing panel with an excerpt from her book, “Publishing: A Writer’s Memoir,” in which she compared the evolving publishing industry to a ballet.

“A proliferation of non-dancers have taken the floor,” wrote Gail. “They don’t dance, they just monitor our movements.”

This symbolized the unstable nature of today’s publishing industry.  Editors and publishers are rapidly losing their jobs, according to Goodwin, making it hard for the remaining “dancers” to keep going.

Still, the publishing industry is not dead. Another panelist, Mary Cummings, had a more optimistic prognosis for her industry.  Cummings is the vice president and editorial director of Diversion books, a digitally focused publisher in New York City.  She stressed the importance for authors and publishers to be dynamic, especially when it comes to re-inventing the way they have previously looked at the industry.

Search Engine Optimization is more important than ever, said Cummings. Panelist Ned Leavitt joked that SEO is “killing many a poetic title,” but having an SEO-friendly title is vital. “It makes older books new on reader’s radar again,” Cummings said.

Panelist Jenny Milchman knows the importance of re-invention. After waiting nearly 13 years, her debut novel Cover of Snow was finally picked up by Random House. While she is a big fan of traditional publishing, she used some new tools in promoting her book. She did her own book tour, traveling the country and “car-schooling” her two kids. And contrary to popular belief, Milchman says that physical bookstores are not dying out. They’re just evolving.

“There are more independent bookstores than ever,” Milchman said.

The first person was absolutely necessary for Lisa Phillips, in “Unrequited: Women and Romantic Obsession.”

“I had a very fierce experience with romantic obsession in my late 20s,” Phillips said. She was motivated to pursue the book through a journalistic lens in order to understand her own experiences with unrequited love. “Why does it happen? Why does it become so all consuming in some cases?”

She said her journalistic background helped, as she knew the process of researching a nonfiction book. She conducted extensive research on neurochemical psychology and countless interviews with subjects who had experienced unrequited love, themselves.

“You have to use different skills to find the right people,” Phillips said

In her case, she used Facebook as a way to crowd source for candidates willing to tell their story. Due to the sensitive subject matter, Phillips did something unconventional: she allowed her sources to remain confidential.  She quickly realized that she would not get very far with her book otherwise.

Benoit Denizet-Lewis wrote his nonfiction memoir, “Travels With Casey,” about a cross-country road trip he took with his dog.

“My first inclination was, I had a sort of strange, conflicted relationship with my dog,” said Denizet-Lewis.  “I felt that my dog didn’t like me that much. I wanted to kind of work that out.”

His book ended up encompassing his own story of bonding with his dog, as well as human-dog psychology, travel, and even romance. Like Phillips, his book stemmed from a personal quest, and ended up becoming a journalistic analysis of a broader theme that can relate to millions of people. He stressed that having a personal connection to the subject is vital to him in his magazine work, too. Still, he has experienced some backlash from critics.

“Some people said I was trying to do too many things,” Denizet Lewis said.  “Is it a memoir, is it a travel book, is it journalism…what is it?”  However, he says, “Most people appreciated it.”

The panelists also tackled the daunting topic of social media. Panelist Guy Lawson said he was wary of the journalistic merit of “anything involving ‘twit’.” According to Phillips, “Anyone who values depth and information is going to have a conflicted relationship with social media.”

Still, Phillips touted the helpfulness of Facebook in her own endeavors to write “Unrequited.”  She placed a Facebook ad that asked readers to take a survey if they had ever experienced unrequited love.  This led to many of her valuable sources.

“If you can use it in the right way,” Phillips said, social media can be a good thing. “It helped me to get out of my comfort zone,”

“These are not stories people will randomly present you with,” she said. “It is a way of reaching out.”

Denizet Lewis used Facebook and Twitter to drum up press prior to his cross-country road trip. He had about 2,000 Facebook fans before the trip, and about 60 or 70 thousand fans during it. “What’s amazing is how invested in the journey they were,” said Denizet Lewis,  “It was like they were living vicariously through me.

Lawson touted the use of what he calls “anti-social media.” In his reporting on subjects behind bars, one of his most valuable resources has been a relatively new one. Prisoners now have access to closed circuit email. He said his last two books relied heavily on these email interviews. Instead of having to wait weeks to receive a single letter from a subject, Lawson was able to communicate with them many times each day.

“It makes the person you’re interviewing sit down and concentrate,” Lawson said. “You get a more refined answer.”

However, despite his appreciation of “anti-social media,” Lawson still has conflicted views when it comes to social media. He said many times producers for TV and radio shows will look at an author’s Twitter and Facebook following before booking. He has lost jobs due to his low following on social media.

“You have 22-year-olds with 50,000 followers,” Lawson said, “because they have their master’s in tweeting and following, and then you have mid-career people like me with 206 followers.”

Some of these fears and skepticism of social media were echoed on the publishing panel. Mary Cummings said that while it is important to have a large following to promote a book and stay relevant, it’s not necessarily a good idea to start a Twitter two weeks before a book is due. Instead, she said, utilize the other forms of social media that you might feel more comfortable with.

“Twitter people are not necessarily book people,” Cummings said. Goodreads, however, is a form of social media built around sharing books. She urged reluctant social media users to start on that platform.

Goodwin said that we are living in a reality where publishers will say, “Let’s see how many people like her on Facebook,” before signing an author. Her advice?

“Deal with it,” Goodwin said. 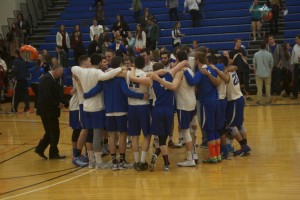