SUNY New Paltz is getting the best of both worlds — athletics and science — as the baseball team works together with the engineering department to enhance their performance.

When Kevin Shanley, assistant professor of mechanical engineering, approached Head Coach Matthew Righter, who is in his second term as head coach of the baseball team, he was surprised by the plethora of science-based training tactics he had in mind — one being a hip sensor that will calculate the rotational velocity of the players’ hips as they swing the bat.

Righter believes that there is a direct correlation between the rotational velocity of a player’s hips with the exit velocity of a ball after being hit off the bat.

Ryan Kelly and Alex Cannella, two fourth-year electrical engineering majors, started this project for their two-semester senior design class in October. Though the sensors were bought on the internet, Kelly and Cannella are currently in the process of programming the software that will allow the sensors to calculate the rotational hip velocity and turn the data into meaningful information, such as a graph, that can be viewed on a computer screen.

“A number that [the players] can see will help them realize what they’re doing to make their swings faster and better,” Kelly said.

He explained that the sensors will be attached to a 3D printed case that will clasp onto the player’s belt. There will be a place to attach the sensors on the back and front of the hips.

Shanley, advisor of Kelly and Cannella’s project, said the team will test whether the x, y or z motion of the hips will make the ball go faster: side to side, back to front, or rotationally.

“Control of the hips will determine how fast the ball goes off the bat,” he said. “Their batted balls will be more difficult to field, harder to catch and because of that, they will get more runs.”

He also explained that the microchip in the sensor sends information to the computer approximately 200 times per second. If it takes about half a second to swing a bat, that’s 100 pieces of information each second.

“This is what the graph on the computer will be composed of,” Shanley said. “We’re looking for the peak values in order to determine [when the ball was hit hardest].”

Righter’s plan is to eventually be able to create “graded” swings — A, B, C, D and so forth.

Shanley explained that Kelly and Cannella’s project is still in its infant stages and will take a couple of years to gather enough data to produce meaningful feedback for the team.

“This way we’ll be able to constitute what a good swing is and use it to the team’s advantage,” he said.

Currently, the sensors are attached to wires that will be long enough to reach through a batting cage and onto a PC computer. Shanley said that the team’s goal is to eventually make the sensors wireless and the software Mac-accessible.

His plan is to pick up where Kelly and Cannella leave off at the end of this semester and to work with senior computer engineers this summer.

“We want to get a head start before the next school year and be able to take apart the product we have now and translate its coding into Mac format,” Shanley said. “We want to focus on the software side of the project next — we’re mainly working on the hardware right now.”

Coach Righter said that he knows this device will be something that can give his team feedback that will help. Between the poor weather and the team’s game schedule — which is the second hardest in the nation against nationally ranked teams — the beginning of the season has been a struggle for them, he said.

“When we work together with people with different perspectives, we’re able to accomplish really awesome things despite any adversity,” Righter said. “And to be successful we have to be creative like this. I’m hoping these kinds of ideas in the training areas can take the team to the next level.”

Construction of Mohonk Walk Creates a Dangerous Inconvenience for Students

Tue Apr 28 , 2015
By Jess Napp On a typical afternoon, the walk to Van Den Berg Hall is a simple stroll down the stairs adjacent to Old Main and the Jacobson Faculty Tower. However, on a recent Tuesday, political science major Megan Carbia was on her way to class at the distant building […] 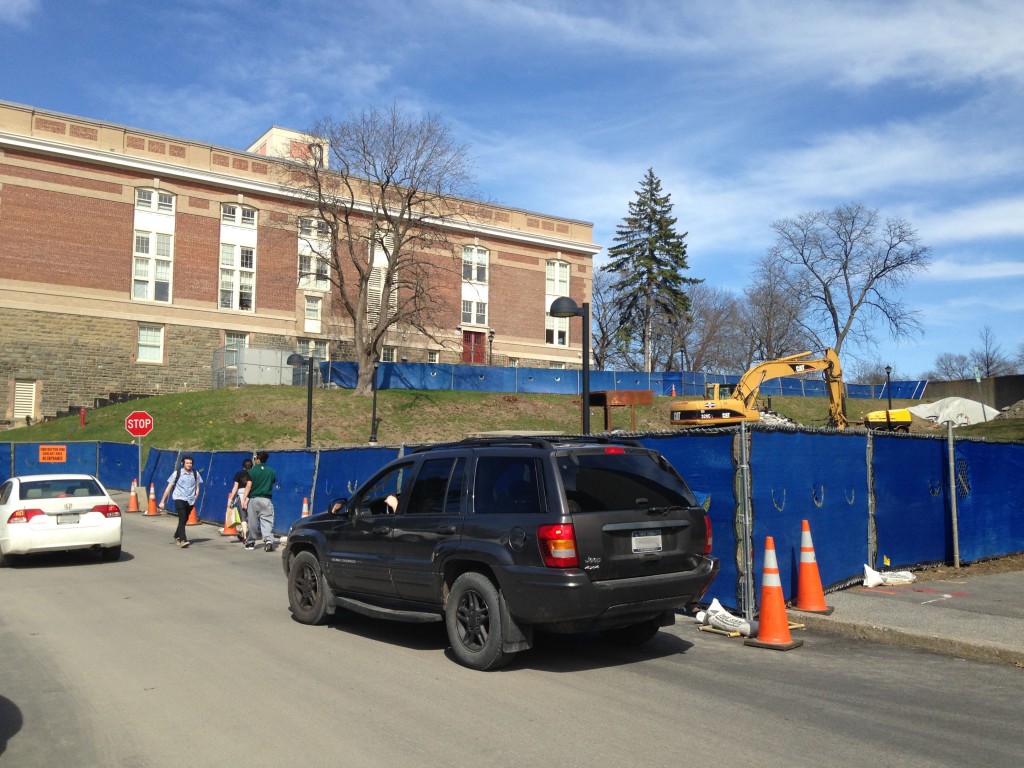