The amount of kilowatt hours used and carbon dioxide emitted in New Paltz is equivalent to nearly $6 million which fuels coal and gas companies, counteracting the “green” progress the state has made since banning hydrofracking at the end of 2014 — but New Paltz is not alone in this.

There are still 37 states nationwide which continues to frack, hurting the Earth by drilling for gas and oil miles below the surface which emits fossil fuels into our atmosphere and contaminating our drinking water. The town of New Paltz, New York currently uses 84,098,904 kWh (kilowatt hours), which is equivalent to 121,862 metric tons of carbon dioxide emissions.

These issues of fossil fuel emissions and the fight towards “green” energy were discussed during Josh Fox and Zephyr Teachout’s Solutions Grassroots Tour: “A Solar Home Companion” in SUNY New Paltz’s Lecture Center on March 10.

SUNY New Paltz assistant professor of biology and event coordinator Michael Boms said that, one event goal was to provide the community with green energy alternatives and educate them about the push for renewable energy.

“Just because fracking is over in the state of New York doesn’t mean our fight stops now,” Boms said. “This is our only world, and we can’t screw it up.”

The Solutions Grassroots Tour, run by environmental activist and film director Josh Fox, hosted several other guests including Teachout, who ran against Gov. Andrew Cuomo in the 2014 midterm election, and renewable energy expert Tim Woodcock. The event included several musical performances as well as a preview of Fox’s next feature film about climate change.

Teachout spoke first and focused on the politics and poetry of going green. She remained positive in the wake of doubt that many have regarding the cost of acquiring solar energy.

“You banned hydrofracking, and nobody thought that was possible six years ago,” Teachout said.

Following Teachout was Tim Woodcock, who spoke on behalf of Frack Action, “an organization working to protect our water, air and public health from the dangerous practice of hydraulic fracturing, or fracking,” according to their website frackaction.com.

Woodcock further addressed the effects that fracking and the use of nonrenewable energy have on our environment, and also offered solutions for people who are willing to go green.

His first suggestion to the audience was to switch their main energy supply from coal and gas to wind and solar. His second suggestion was for people to make clean energy themselves, by acquiring a “small wind” (wind turbines for homeowners), solar panels and battery storage.

“This is an issue that will define the rest of the decade,” he said. “Demand your energy future. Be the demand. Acquire and procure renewable energy.”

All of the speakers encouraged the audience to join together as a community to “organize and solarize it.”

Fox joined the stage and said that even if a mere 1 percent of New Paltzians — approximately 69 people — reduced their consumption, it would create a total of 1,218 tons of carbon dioxide that wouldn’t be emitted and $58,869.23 that wouldn’t go to fossil fuel companies.

Tue Apr 7 , 2015
By Lindsey DeTrano Confidence will carry you further than luck or chance. That was the message conveyed to SUNY New Paltz students by a panel of successful businesswomen on March 11. Each school (Liberal Arts and Sciences, Business, Engineering, Fine and Performing Arts, Education and Science and Engineering) hosted business […] 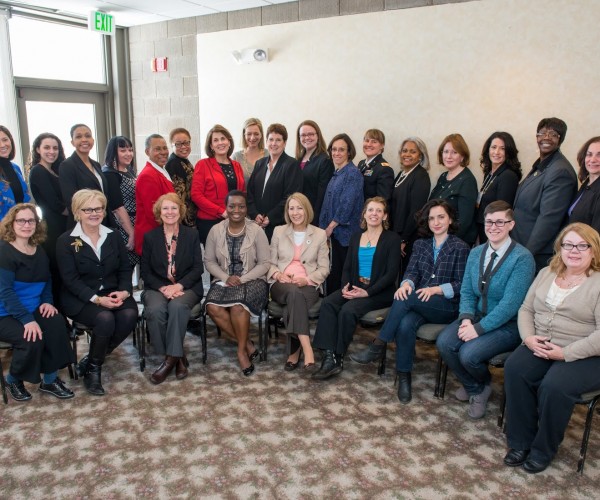