On the drenched Monday morning of Aug. 29, Director of Design Mary Kastner called Jim Lyons to tell him that Hurricane Irene flooded the print shop and there was no sense in coming to campus. The next time his phone rang, Vice President Shelly Wright was on the other line.

“Jim…you better get in here,” she said.

The hurricane knocked out the electricity in Haggerty so Lyons beheld the eerie destruction with a flashlight. Pieces of printers and boxes of printing materials that belonged in one room had floated into another. Piles of paper that would have printed every document for every department on campus turned into heavy useless cinder blocks. The 3 feet of water was now draining, but it left a wave of damage to machinery that cost tens of thousands of dollars to repair or replace.

Campus departments turned to PDQ Printers in the town of New Paltz while they waited for repairs to the print shop, paying close to 50 percent more than what an invoice from Jim Lyons would charge for the same jobs. The four-month period without a print shop showed President Christian and the administration how economical it was to have an onsite printer.

Hurricane funding slowly filled the print shop with new equipment and Lyons, Print and Mail Services Manager, and Jeff Baker, Digital Imaging Technician, dried off and bounced back. Save for the $50,000 Heidelberg Quickmaster 46 printing press which survived, but required $18,000 in electronic repairs, every machine needed to be replaced.

But today, aside from a faint horizontal water line on a stainless steel double-basin sink, the shop shows no indication of a flood. Incomers are greeted with the scent of hot copy paper, freshly printed with ink and two cheery comrades. Printers project sheets of paper into collated piles and machines buzz and whirl throughout the fluorescent-lit room like a corporate Wonka factory.

Lyons has been in the printing business since the Monday after he graduated high school in 1979. Things were very different back then, when it took 40 minutes to create a plate (just like a film negative) for a printing press. Now, he clicks his mouse to develop a plate and the mechanisms at his fingertips expedite every process. “We saw the change from traditional to digital together,” said Baker, Lyons’ colleague. It was only a few years before they went from two-color copiers to unlimited options for color printing.

“Get this, in ‘81, someone offered to sell me stock in Xerox and I didn’t think it would fly.” Lyons chuckled, playfully insinuating he felt a little regret in passing up the 10 cents a share. But he doesn’t complain.

In addition to the print shop, he manages the mailroom, where more than 10,000 packages were processed in the month of September, and takes great pride in being a department on campus with a stellar reputation.

Baker takes care of all things digital. He sees projects from PDF to the final copy. In recognition of his work ethic, Baker won the 2013 Chancellor’s Award for Excellence in Classified Service. He still comes in early, around 7:30 a.m. on weekdays, and uses Saturday to catch-up.

Lyons and Baker are the go-to guys for every print project on, and sometimes off, campus. There’s the institutional priority to complete projects for campus departments first, but Lyons isn’t in the business of turning students away, even after they graduate. His eyes move to his screen as he pulls up the software that calculates the correct price for students or alumni. They’re charged the cost of the materials, plus about 30 percent for overhead and labor. One click and the order is processed.

Lyons reviews blown-up black and whites from New Paltz students in the 1960s, boasting of how they were salvaged from a damp corner office somewhere on campus and now, “they’re brought to life again.” From orientation to commencement and all of the essays, posters and thesis projects in between, there’s no job they will deny.

Swiftly and with clean fingertips, Baker inspects a few hundred copies, stapled corners aligned, and places them in a box for pickup. Lyons packs away empty toner cartridges to send back to the manufacturer for recycling.

Above them hangs a sign: “Find a job you love and you’ll never work a day in your life.”

“You know, sometimes I don’t know how we do it…but we do it,” said Lyons.

Baker, on the other side of the room, acknowledges with a silent smile and nod.

Thu Dec 4 , 2014
By Russell Hartman   6 feet 10 inches tall. That’s a big guy. His name is Anthony Davis and he has managed to put himself in the NBA MVP conversation within just a few short years. He is mentioned in the same breath in players such as Kevin Durant and […] 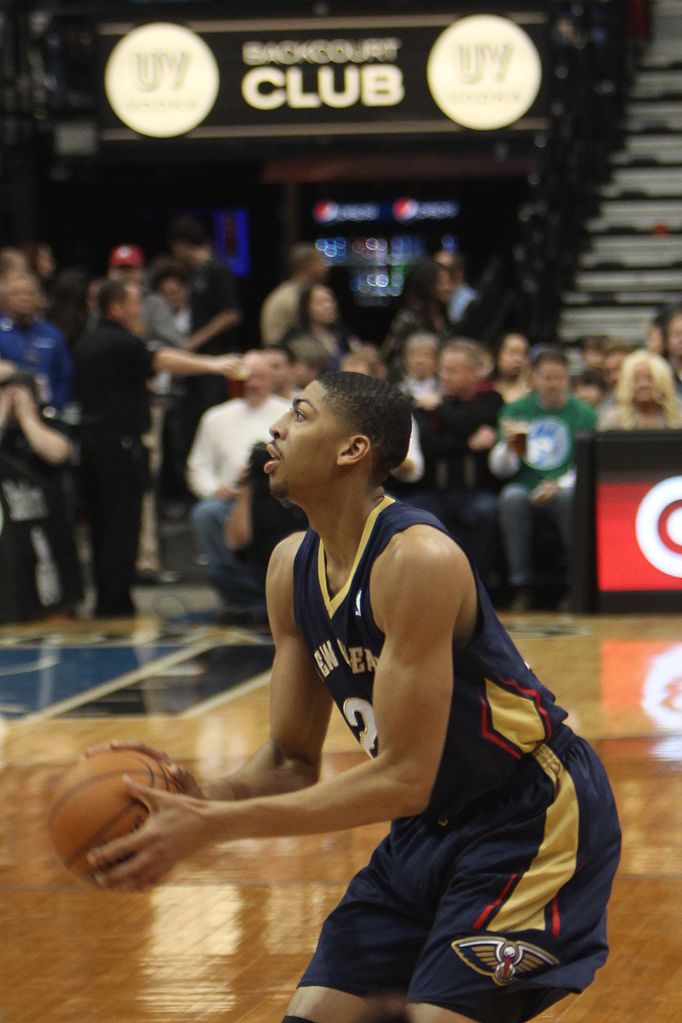