“Boom, Boom, Bap! Left, right, left!” A booming voice fills the air as a group of serious faces follow the orders, “Do you guys understand where I’m getting at? It’s like a party, act like you got all that swag!”

Christine Drexler steps forward to the iPod speakers against the mirrored wall that blare “Delirious” by Steve Aoki featuring Kid Ink. “Five-six-seven-eight!” and suddenly there’s an atomic explosion. The 12 sweaty bodies swiftly lift their right legs up like Rockettes and move their left arms like malfunctioning robots.

Drexler, 20, is a third-year theatre arts major at SUNY New Paltz. This semester, she’s been chosen as the assistant choreographer for the Theatre Arts department’s mainstage musical production of “Rent,” under choreographer Joe Langworth.

“Rent,” written by Jonathan Larson, follows an eclectic group of bohemians who roam the New York City streets and some of them live with HIV/AIDS. This is her first time assistant choreographing a show, but she usually teaches jazz or hip-hop dance classes.

“It’s a full length show I’m working on as an assistant. I usually just do certain numbers as a choreographer,” said Drexler.

At age 12, Drexler, who grew up in Oyster Bay, had to choose between dance and gymnastics. Although she loved doing both, she chose dance because the teachers were nicer. She became well versed in tap, jazz, ballet, pointe, hip-hop, lyrical and musical theatre to name a few genres. Her versatility led her to become a dance teacher at 18, which introduced her to choreography. Her face lights up when choreography is mentioned.

“Choreography takes a lot out of me,” Drexler said, “but I can’t help but smile when I see my hard work shine through these dancers.”

“She pretty much just says what’s on her mind when it comes to choreographing,” Lia-Shea Tillet, a fellow dancer, said. “But in the best way. She’s never rude about it.”

On the black-marbled floor of the McKenna Theatre lobby, Drexler sits cross-legged next to Langworth. She furiously writes in her blue notebook as he recites the moves for “Contact,” a song when the principal character, Angel, is dying from AIDS. Langworth slaps the floor to every beat, making sure Drexler understands the rhythm. A complication arises.

“We have to choreograph the death drop today,” says Langworth. Drexler pauses her writing and slowly looks up, her face in fear. Angel must stand on a table in a Jesus-like pose, then dramatically fall into the arms of the ensemble. Langworth and Drexler start to clasp each other’s arms and make a seat.

“How about the ensemble catches Angel like this?” he says.

“I don’t know, Joe, Angel is small and might slip through.” They quickly figure out a different way to catch him, and immediately write down their decision.

“To be a successful choreographer, assistant or not, the audience has to understand that there was a storyline behind [the dance],” Drexler explains. “Then, you’ve got to figure out spacing and pay attention to how it looks. You failed if all you did was just put a bunch of dance moves together.”

Drexler takes this approach, even when she teaches her dance classes. At the beginning of her hip-hop class, she explains to the group of dancers what she’s trying to convey. Then, she does each section of the dance in four counts, slowly displaying the moves. Every eight counts, she goes back to the beginning so the dancers can connect the moves at the regular tempo.

Drexler stands against the mirrored-wall, facing the 12 sweaty bodies. “One more! Just have fun with it!” She kneels down to the iPod speakers and blasts the music. An explosion occurs for one last time and Drexler just smiles a beaming smile. She stands with pride and focuses on each body, admiring the moves she taught them. The last music note rings and suddenly, silence fills the air and all goes still. Drexler’s clapping caused an eruption of applause. The class ended. Students found their bags, put on their shoes, slurped their water, and the room was empty once again.

Thu Dec 4 , 2014
By Ella Graffin   As snow dusted the town of New Paltz on Tuesday afternoon, Dec. 2, determined activists lined the intersection of Main Street and South Putt Corners while chanting together: “No oil spills, not one drop, Pilgrim Pipeline’s got to stop!” The activists were protesting against the construction […] 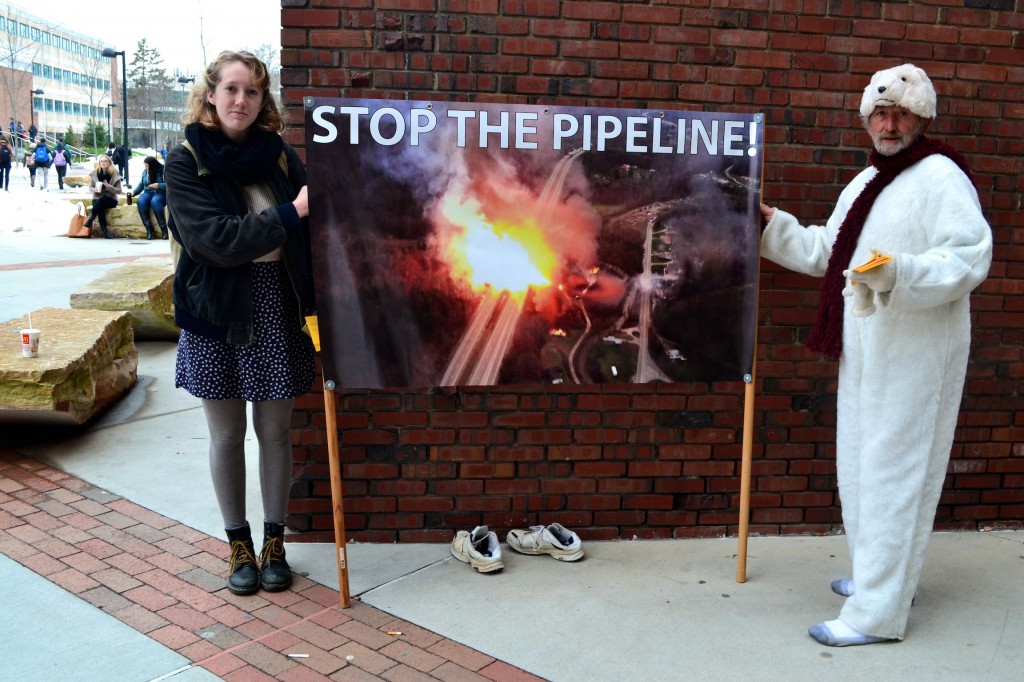