Tina Marie Clayborne had no idea what she was in for as she entered her champagne-colored 2005 Saturn minivan. With her studded, pink Samsung Galaxy in hand, Clayborne set out to pick up a group of college students in the heart of Newburgh.

The students, with slurred syllables, had called for a ride. Clayborne arrived on the scene with her soft smile and charismatic attitude ready to aid her callers. The 20 students weaved and climbed on top of Clayborne’s leather seats transforming her taxi into a 1961 Chevy Impala Bubble Top.

Jamming to Lady Gaga and Maroon 5, Clayborne guided her passengers through the streets of Newburgh until they were able to stumble into the stairways of their dorms.

This has been Clayborne’s life for the past 26 years and says that she has seen it all.

“It’s a very good experience where you get to go to different places,” Clayborne said, “I like talking to people and I feel that a cab ride should be on mutual ground with the customer.”

As an adopted girl with four brothers and retired law enforcement parents, living in the foster system and battling personal demons, Clayborne had her share of struggles.

“I was not the greatest daughter,” Clayborne said, “but I’ve grown up since then and know that my dad is proud of me.

Tired of working for other cab companies and in the wake of her father’s passing in 2012, Clayborne set out on her own with Tina’s Taxi, a family-run company

“I wanted to do something for my dad, like a family thing,” she said.

With a new inspiration and outlook on life, Clayborne took everything she had and moved from Newburgh to Modena with her fiancé, daughter and eight grandchildren, leaving her struggles in the past and starting over. Clayborne knew Modena was in need of a service like hers, so she converted her family minivan into a functioning taxi.

As of October 2013, she has entered the New Paltz community on Friday and Saturday evenings. Parked on the corner of Main Street and Plattekill Ave, Tina’s Taxi waits for people in need of transportation.

She waits in her vehicle until a solo person or group arrives. To Clayborne, no party is too big or small.

Although some nights start slower than others, once Clayborne’s night begins, it becomes nonstop. She will shuttle one full car home while receiving a call for another ride. Clayborne says that though the calls die around 4:30 a.m., she keeps going until she returns to town and there is nobody left to transport.

Lauren, a junior at SUNY New Paltz, recalls her experience with Clayborne. “She was relatable, and talkative. I felt more comfortable in her car than the others in town because she was conversational and made sure I was comfortable.”

Clayborne believes that successful cab rides go further than just transporting someone from point A to point B, but instead communication should be exchanged to allow the ride to go easier and smoother.

Such communication goes further than just with the people in her cab.

As Clayborne was parked in the handicapped spot next to Starbucks one evening she was approached by two police officers with their eyebrows down, holding their belts in their blue uniforms. They looked at Clayborne in her black shirt with studded butterflies and told her she must move her cab. She was in violation for parking.

Clayborne expressed that she was just a local cab, but the cops insisted she move, so Clayborne started her vehicle headed down Main Street towards the Mobile gas station and continued her night.

As the evening came to a close, Clayborne saw the same two people in blue uniforms headed for her. She was at a stop sign headed home. They walked up to her taxi with blank expressions and pointed in the direction of P&Gs. On the bench outside was a lone male, barely able to sit up. The cops asked Clayborne to take him home and she did exactly that.

“We are open 24 hours, you can call me and I will come and pick you up,” explains Clayborne.

Clayborne is unsure of where her business will go in the future, but hopes that it will remain bright, allowing it to be passed down to her grandchildren. She knows the struggles she faced in her hard life, but is proud of herself and all that she has accomplished. More importantly, she knows that her father is watching over her, and is proud.

Thu Dec 4 , 2014
Howard Good’s Fall 2014 Media Ethics class were asked to create films interpreting this quote by Theodor W. Adorno: “Triviality is evil – triviality, that is, in the form of consciousness and mind that adapts itself to the world as it is, that obeys the principle of inertia. And this principle […] 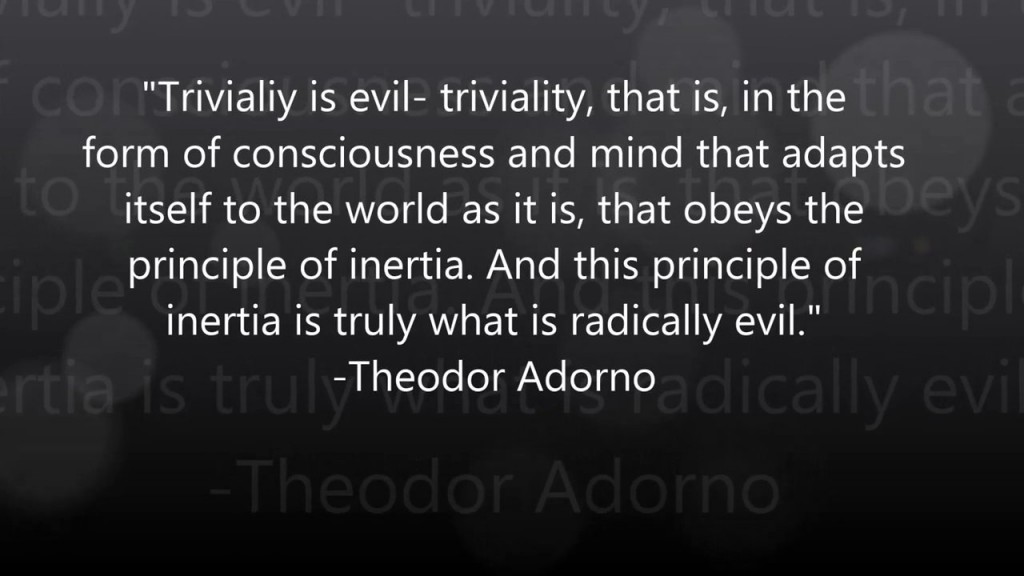